Another year in the streaming trenches is in the books, and Netflix is eager to start 2020 by declaring itself a winner. At the end of December, the industry leader—which weathered the launches of Disney+ and Apple TV+ in 2019 and will soon face additional competition from HBO Max and NBCUniversal’s Peacock—released a handful of top 10 lists enumerating its most popular new programming of the year. These rankings are as fascinating as they are limited by Netflix’s perennially confusing metrics and highly selective approach to sharing audience data. As we head into yet another year of Peak TV, it’s worth taking stock of what the report does and doesn’t tell us about the coming decade for Netflix in particular—and television in general.

Before we get started, I feel compelled to issue the standard disclaimer about statistics that come straight from Netflix: They’re not verified by a third party, and even if they are all technically accurate, these numbers can be misleading. Why, for example, are Friends and The Office—two of the platform’s most consistent top performers, both of which are departing for other services—absent from these lists? Not because their popularity dipped in 2019, but because they weren’t new releases last year. Top 10 lists that included viewership of older movies and TV shows would, presumably, look pretty different. Also keep in mind that for the purposes of this report, Netflix defined a household as having “watched” a title if it’s seen as little as two minutes of it. Finally, rankings are not the same thing as hard viewership numbers—and rankings for shows that have been on the service for less than 28 days (in this case, You season 2, The Witcher and the Michael Bay movie 6 Underground, among other top performers) are based on projections.

With all that out of the way, let’s get into it.

Just because no one’s talking about a Netflix original, doesn’t mean it isn’t popular

I’ll admit it: When I saw that Netflix’s most-watched new release of 2019 was Murder Mystery, it took me a minute to recall that the generically titled movie was in fact a comedy flick starring Adam Sandler and Jennifer Aniston. While critics almost unanimously dismissed it as more bland Sandler-factory fare and it’s more likely to take home a Golden Raspberry than an Oscar this awards season, the film also failed to generate the kind of controversy that kept, say, Joker in the headlines for months. Yet according to Netflix, 73 million households had viewed it by the end of September. Among the service’s top TV releases of the year were The Umbrella Academy and Raising Dion, both comic-book adaptations that failed to capture the attention of the chattering classes. And who would have predicted that Jailbirds, a sort of reality-TV Orange Is the New Black filmed at Sacramento County Jail, would be second only to Tidying Up With Marie Kondo as the year’s most-watched reality show? It isn’t news that cultural products can thrive without critics’ endorsements—or even, in the case of broadcast-TV juggernauts like The Big Bang Theory and Dick Wolf’s Chicago franchise, much pop-culture visibility. But streaming services have always seemed more reliant than traditional TV on word of mouth, on social media in particular, to help viewers cut through their glut of originals. This year’s Netflix top 10 lists suggest that we shouldn’t underestimate the power of the algorithm.

Expensive sci-fi and fantasy spectacles are paying off

Netflix’s three most-watched new TV seasons of 2019—Stranger Things 3 and the debuts of The Witcher and The Umbrella Academy—have two things in common: they’re genre shows and they cost a ton of money to make. It probably doesn’t hurt, either, that the latter two were adapted from franchises that were already popular in other media. While they range in quality from decent to terrible, the voracity of fan culture renders all of these series effectively critic-proof—which is good news for Netflix, if not for those of us who think shows without supernatural creatures deserve nice production values too.

Yes, lots of subscribers are watching trash. But ambitious programming is flourishing, too

Jharrel Jerome in 'When They See Us.'
Atsushi Nishijima/Netflix

Still, viewers who come to Netflix for the kind of movies and shows that win awards and top critics’ best-of lists shouldn’t despair yet. When They See Us and Unbelievable—two thoughtful, serious and beautifully made miniseries that dramatized real-life failures of the criminal justice system—were among the service’s most-watched series of 2019. Macho entertainments of the type that dominate the box office are sharing space on these lists with other smart, often diverse, female-driven dramas (You), comedies (Dead to Me), documentaries (Beyoncé’s HOMECOMING) and reality hits (Marie Kondo, Jailbirds). And Netflix claims that Martin Scorsese’s masterpiece The Irishman was its fifth-most-popular new release of the year across mediums. That’s heartening for those of us who fear that competition will force the service to become a franchise factory like Disney, even if I still wish Netflix’s best new show of 2019, Russian Doll, had cracked the top 10.

Speaking of Disney, a handful of the mega-brand’s blockbusters remained on Netflix throughout 2019 thanks to old licensing agreements. That explains the presence of two new Disney films, The Incredibles 2 and Ralph Breaks the Internet: Wreck-It Ralph 2, as well as Sony Pictures’ Marvel collaboration Spider-Man: Into the Spider-Verse, among the service’s 10 most-watched new movie releases of 2019. And remember: the list doesn’t even account for the relative popularity of any Disney titles on Netflix that made their streaming debuts before last January.

The children are Netflix’s future—and the company knows it

Since it can’t count on licensed Disney titles to hold kids’ attention in the long run, the race is on for Netflix to develop its own essential children’s, teen and family programming. Those efforts are already paying off. If you don’t have young children, you might not have heard of Mighty Little Bheem; it’s a cute, silly, computer-animated kiddie confection from Netflix India that was this year’s most-streamed new international release among subscribers in the U.S. Shows such as Stranger Things, The Dark Crystal, Nailed It! and Raising Dion have become cross-generational hits. And the service has continued to cement its hold on teens and young adults, with youth-focused offerings like You, The Umbrella Academy, Sex Education and the controversial 13 Reasons Why, as well as Stranger Things, all ranking in the top 10 new series of 2019. Meanwhile, the success of HOMECOMING, the festival-scam doc FYRE and Rhythm + Flow—the hip-hop reality competition starring Cardi B, Chance the Rapper and T.I.—suggest that Netflix is making inroads into music programming aimed at the post-MTV generation.

Half a decade ago, when Serial, The Jinx and Making a Murderer hijacked the cultural conversation, the mainstreaming of true-crime narratives seemed like a fad. But the hunger for these stories has shown no signs of ebbing, even if they’ve proliferated to the extent that no single show or podcast can dominate our attention for long. True crime and its lightly fictionalized cousins—like Bonnie-and-Clyde riff The Highwaymen and Ted Bundy biopic Extremely Wicked, Shockingly Evil and Vile, two Netflix movies that were among the site’s 10 most-watched new releases—proved massively popular in 2019. It was the service’s top documentary program of the year, Conversations with a Killer: The Ted Bundy Tapes, that kicked off the recent Bundy-mania (which will continue this month with the Amazon original docuseries Ted Bundy: Falling for a Killer). Bracingly bizarre docs, from Abducted in Plain Sight (a rare non-Netflix Original to appear on these lists) to Don’t F**k with Cats: Hunting an Internet Killer, have not only sucked in heaps of viewers, but also brought them to social media to share their “ugh,” “omg” and “wtf” reactions. Even The Irishman is based on a nonfiction book. Especially considering that this is one arena in which the family-focused Disney+ can’t compete, Netflix is sure to keep the true-crime tap flowing.

It is a fact universally acknowledged that Netflix has changed the comedy game over the past few years, launching a new golden age of stand-up and playing host to some of the form’s most talked-about personalities, from Dave Chappelle (whose controversial special Sticks & Stones was its most-watched new comedy special of 2019) to Hannah Gadsby. And while it’s been apparent for a while that the service is paying particular attention to rising stars who happen to be women, people of color and members of the LGBTQ community, we haven’t necessarily known how successful that strategy has been with viewers until now. Of the top 10 new Netflix comedy specials of last year, only two (Jeff Dunham’s Beside Himself and Bill Burr’s Paper Tiger) featured white men. The remainder of the list—which includes Chappelle, Ken Jeong, Wanda Sykes, Gabriel “Fluffy” Iglesias, Amy Schumer, Aziz Ansari, Mike Epps and Kevin Hart—represents the cornucopia of identities and styles that have become the new normal in stand-up comedy. 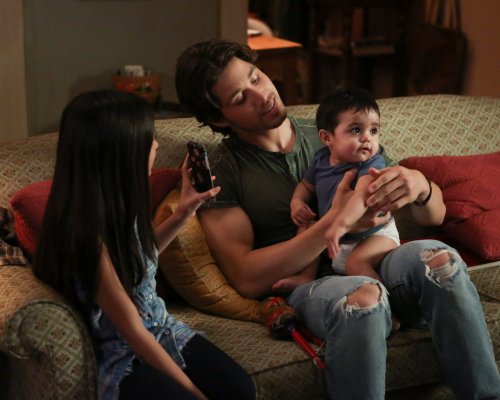 In Party of Five and Everything's Gonna Be Okay, Freeform Reinvents the Orphan Saga for Gen Z
Next Up: Editor's Pick