The True Story Behind the Movie The Irishman

In Martin Scorsese’s The Irishman, union leaders and mob bosses are nearly indistinguishable, morality fades into a mass of conflicting allegiances and close friends can be more dangerous than bitter enemies. This is a crooked mid-century world where truth is never certain — be it in the promises of the Cosa Nostra or the credibility of the film’s narrator, Frank “The Irishman” Sheeran (Robert De Niro), a man whose assurances to his family are as much in doubt as his admissions to the audience.

Based on the best-selling book I Heard You Paint Houses by Charles Brandt, The Irishman (which opens Nov. 1 in limited theaters, then streams on Netflix Nov. 27) shows Sheeran’s sordid journey through both the Philadelphia mob underworld and the only slightly less corrupt Teamsters union, led by its brash, charismatic president Jimmy Hoffa. The general outlines of that story are a matter of public record; the specifics are based on the real Sheeran’s own description of events to Brandt. In that telling, Sheeran sits at the center of some of the most sensational crimes of his time, and has a hand in a few others. In all those cases, definitive facts are in short supply; officially, the two largest crimes shown in the film remain unsolved. But the characters of Scorsese’s latest epic are all too real.

Here’s the real story behind the figures of The Irishman.

Jimmy Hoffa, president of the teamsters union, was at one point one of the most powerful men in the U.S.
Bettmann Archive/Getty Images

A crusader to some, and a villain to many, Jimmy Hoffa (played by Al Pacino) was, for a time, one of the most powerful labor leaders in the U.S. From 1957 to 1971, he was the president of the International Brotherhood of the Teamsters, a trucking union that Hoffa helped build into the largest union in the country.

But Hoffa was no do-gooder, and he and his union were long known for their association with organized crime. Those connections eventually led to one of the longest, most involved congressional probes in U.S. history, as the Select Committee on Improper Activities in the Labor or Management Field (the so-called “Rackets Committee”), led by chief counsel Robert Kennedy, began investigating Hoffa and other Teamster leaders in 1957. Kennedy saw that battle against Hoffa as a moral crusade. “The Teamsters Union is the most powerful institution in this country — aside from the United States Government itself,” he later wrote. “As Mr. James R. Hoffa operates it, this is a conspiracy of evil.”

When Robert Kennedy became Attorney General in 1961 under his brother John F. Kennedy, he went after Hoffa even harder, going as far as to create a Justice Department “Get Hoffa squad.” Eventually, the crooked union president’s luck ran out, and in 1964 he was sentenced to 13 years in federal prison on charges of fraud and jury tampering.

In late 1971, President Nixon commuted Hoffa’s sentence under the condition he not “engage in the direct or indirect management of any labor organization.” Yet it is believed that Hoffa may have been doing exactly that, attempting to gain control of his old union, when he went missing in 1975. Hoffa was declared legally dead in 1982, though his body has never been found. His son, James P. Hoffa, took up his father’s mantle, serving as Teamsters president since 1999.

Russell Bufalino appears before the legislative watch dog committee during hearings in the Capitol on the Apalachin, New York, crime congress. In his January 9th appearance Bufalino used the Fifth Amendment to avoid questions on the meetings.
Bettmann Archive/Getty Images

As in real life, Joe Pesci’s Russell Bufalino in The Irishman cuts a low profile that conceals his influence. A quiet leader of a Northeast Pennsylvania crime family, the real Bufalino was a powerful player in the Teamsters union, according to Brandt, and had even allegedly been recruited to spy in Cuba by the CIA. Moreover, in Brandt’s telling, Bufalino was behind some of the most explosive mob murders of his time.

Some of those facts may be in dispute, but there’s one (attempted) murder that Bufalino was certainly behind. As a witness testified at a 1981 trial, Bufalino asked two associates in 1976 to kill another witness who was under the protection of the Federal Witness Protection Program. It was not the first time Bufalino had made moves on that man’s life. He would testify in 1977 that Bufalino threatened to have him murdered over a $25,000 debt, a charge that landed Bufalino in prison for close to three years.

The 1981 trial ended in another conviction, this time of conspiring to kill a witness, which sent Bufalino, by now 77 years old, to prison for nearly a decade. He died at 90 in 1993.

Depending on who you ask, the real Frank Sheeran was something between a crooked two-bit Philly Teamsters leader and one of the most prolific mafia hitmen of all time. His own version, as told to Charles Brandt near the end of his life, was the latter. Without going into spoilers of The Irishman, it’s fair to say that Sheeran copped to a few devastating crimes, along with “25 to 30” other murders, as described in I Heard You Paint Houses.

Sheeran did have something of a criminal past, according to Slate. He faced two indictments related to the murder of fellow union members, and was charged for assaulting a truck driver with a lug wrench in 1964. Years later, he was convicted of scamming Teamsters members. And, after winning early parole and apparently spilling a long list of heinous crimes to Brandt, Sheeran died in 2003, six months before the release of Brandt’s explosive book.

Anthony Provenzano (Stephen Graham), known to associates as “Tony Pro,” was a living embodiment of the crossover between the Teamsters union and the mob. He was allegedly a boss in both, serving at one time as a vice president of the union and a capo in a notorious mafia family. Known for his thuggish tactics, several of Tony Pro’s enemies and rivals disappeared or were murdered over the years, most notably Jimmy Hoffa, who went missing on his way to a meeting with the Provenzano.

No one ever pinned Pro for Hoffa’s killing, though he was eventually convicted of another murder in 1978, having paid a mob enforcer to kill a Teamsters rival nearly two decades earlier. Around the same time, he was convicted in two separate racketeering cases, which together landed him in prison for the rest of his life. He was serving a 20-year racketeering sentence in California when he died in 1988.

Lawyer William Bufalino (Ray Romano) plays a prominent part in the first act of The Irishman, hamming it up to get union members out of scrapes with the law. In real life, Bufalino was nearly as effective. He represented the Teamsters and their leader Jimmy Hoffa through the ‘50s and ‘60s, fending off an onslaught of racketeering accusations. According to his New York Times obituary, he went to court seven times for Hoffa and the Teamsters, and won all but two of those cases. But around the time that Hoffa was getting out of prison in 1971, Bufalino distanced himself from his onetime client.

Throughout his life, Bufalino adamantly denied being party to any criminal enterprises, or defending members of the mafia. He even filed lawsuits against Robert Kennedy and Senator John McClellan for allegedly damaging his reputation, which were unsuccessful. He died in Florida in 1990 at 72. 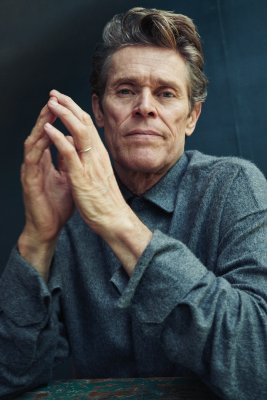 Willem Dafoe on The Lighthouse, Inspired Directors, and What He Cherishes in New York City
Next Up: Editor's Pick