Why the U.S. Assassination of Iranian Quds Force Leader Qasem Soleimani Has the U.S. Bracing for Retaliation

The assassination by U.S. airstrike of Iran’s Gen. Qasem Soleimani on Friday immediately ignited concern that the asymmetrical warfare he famously championed would not only survive his death but also avenge it.

U.S. military facilities across the Middle East ramped up security and the U.S. embassy urged American citizens to “depart Iraq immediately” after the Pentagon confirmed President Donald Trump had ordered the strike against Soleimani.

The killing was not like other attacks to eliminate enemies of the U.S.—the raids that killed Osama bin Laden or ISIS leader Abu Bakr al-Baghdadi. Soleimani was a major public figure in Iran, a Major General in Iran’s Revolutionary Guards Corps, and easily the most popular official in an Iranian government that generally is not. Inside Iran, and on social media posts circulated globally, he was the frontman of, as well as chief architect for, Iran’s regional ambitions – in Syria, Lebanon, Yemen, and, most immediately in Iraq, where he met his end.

“Soleimani was the international face of resistance,” Iran’s Supreme Leader, Ayatollah Ali Khamenei said in a statement, “and all lovers of resistance will be his avengers.” He promised that “harsh retaliation is waiting.”

After announcing his death, Iranian state television suspended all programming and displayed a photograph of Soleimani accompanied by mournful recitations from the Quran, signaling a major event. State TV also began airing footage of Iranian forces in combat, from the Iran-Iraq War— which Soleimani fought in—to Lebanon and Syria.

Soleimani’s death, on a roadway in Baghdad’s international airport, threatened to sharply escalate U.S. hostilities with Iran. The airstrike was Trump’s second military response to Iranian measures that had grown steadily more audacious over the seven months they went unanswered. The current cycle began on Dec. 27, when a sustained rocket attack on a U.S. base in Iraq’s north killed a defense contractor working for the Americans.

Trump blamed the attack on a militia backed by Iran, Kataib Hezbollah, and on Sunday U.S. aircraft hit the militia, killing 24. Two days later, militia backers penetrated the U.S. Embassy in Baghdad, burning outbuildings and chanting “Death to America.” In the crowd at the embassy was Kataib Hezbollah founder Abu Madhi Muhandis, who was killed in the strike along with Soleimani.

Soleimani, 62, commanded the Quds Force, the branch of the Revolutionary Guards responsible for operations abroad, from sabotage and terror strikes to supplying militias that operated as Iran’s proxy forces. In Afghanistan, he reportedly advocated cooperation with U.S. forces against the Taliban, a Sunni-fundamentalist group that had been a constant threat to Iran, which sees itself as the leader of the rival Shi’ite sect of Islam. But the tentative alliance did not survive President George W. Bush’s inclusion of Iran in his “axis of evil,” and then the 2003 U.S. invasion of Iraq, which placed more than 100,000 American troops on Iran’s border.

Iran’s evolving response to the invasion may offer a clue to how it will respond to Soleimani’s assassination. At times when the U.S. has showed off military strength, the Islamic Republic has appeared cowed. Within hours of a 2003 U.S. cruise missiles strike on Ansar al-Islam, a Sunni terrorist group in northern Iraq that Iran had found it convenient to aid, Tehran closed the border over which it had supplied arms, and laid very low. And according to published U.S. intelligence estimates, it was after the fall of Saddam Hussein that Iran, apparently intimidated by the U.S. forces next door, abandoned work on an atomic warhead, while continuing the civilian side of its nuclear program.

Soleimani was never one to hide his light. In 2008, an intermediary delivered a written message to Gen. David Petraeus, who then commanded the Multi-National Forces in Iraq. “General Petraeus,” it read, “you should be aware that I, Qassem Soleimani, control Iran’s policy for Iraq, Syria, Lebanon, Gaza, and Afghanistan.”

In the decade that followed, Soleimani was the face of an Iranian regime hugely empowered by the U.S. invasion of Iraq, which first toppled its longtime enemy, Saddam Hussein, then unleashed the electoral power of Iraq’s Shi’ite majority in a democratic system the U.S. established on sectarian lines. With the retreat of the U.S. from the region and the destabilization from the Arab Spring, Iran took advantage of the region’s descent into sectarian camps—Sunni against Shi’a— as national identities crumbled.

Into Syria, Iran sent both its own forces to save President Bashar Assad, and those of Hezbollah, the militia it had set up in Lebanon decades ago. It found a new client in the Houthi rebels of Yemen, who drew regional rivals Saudi Arabia and the United Arab Emirates into a cruel war. And despite a $1 trillion U.S. investment, and thousands of American lives, Iran remained by far the most powerful country in Iraq.

When the extremist army of ISIS emerged there in 2014, and rolled over Iraq’s army, Soleimani beat the U.S. to the front lines, providing the first arms to the ethnic Kurdish forces who would halt the terrorist’s advance. In Baghdad, the government called for militias to mobilize against ISIS, another windfall for the Quds Force, as most fighters organized by sect. Among the posters published in Iran in the hours after his death was one reading, in English: “General Soleimani, Antiterrorism”

Iran, of course, had done most of the escalating over the previous year—steadily testing Trump in the realm of asymmetrical warfare as he tightened the screws on Iran’s economy in hopes of forcing Tehran to re-open negotiations on the nuclear agreement Trump had unilaterally quit.

But as Trump declined to react military, Iran’s attacks grew bolder—from attacking oil tankers (“very minor,” Trump told TIME, of one), to shooting down a U.S. drone (Trump ordered an counter-attack, then called it off), to, in September, bombing key Saudi oil facilities. Trump’s first military response came only this week, after the contractor’s death. And events quickly spiraled to an aerial assassination that brought gasps among those who knew Soleimani’s importance to Iran.

In 2017, when TIME included Soleimani on its list of the 100 most influential people, former CIA analyst Kenneth M. Pollack wrote that “To Middle Eastern Shi’ites, he is James Bond, Erwin Rommel and Lady Gaga rolled into one.” Inside Iran, his successes abroad evoke the past glories of the Persian empire that, in its early years, the Islamic Republic worked to downplay, because they predated Islam. But the ayatollahs have lately found an asset in nationalism; another poster memorializing Soleimani labels him “PERSIAN GENERAL.”

So popular was he with the Iranian public that Soleimani was envisioned—at least by some in Tehran—as a figure who might provide much-needed public faith in the regime after the eventual passing of the Supreme Leader, now 80—perhaps by becoming the public face of the Islamic Republic while a new top cleric found his feet. That notion, however real or plausible, was also destroyed on the Baghdad pavement.

“The US,” Iran’s foreign minister declared, “bears responsibility for all consequences of its rogue adventurism.” 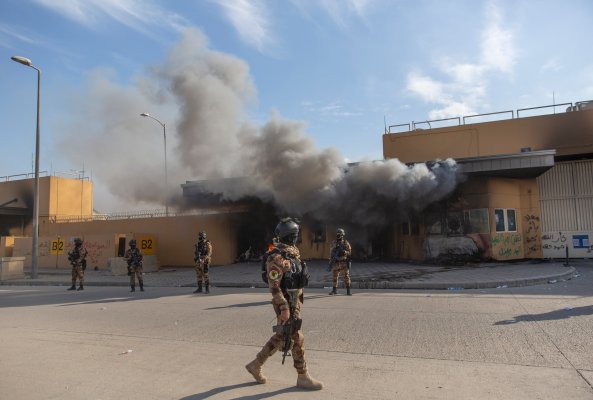