Facing twin challenges in the Persian Gulf, President Donald Trump said in an interview with TIME Monday that he might take military action to prevent Iran from getting a nuclear weapon, but cast doubt on going to war to protect international oil supplies.

“I would certainly go over nuclear weapons,” the president said when asked what moves would lead him to consider going to war with Iran, “and I would keep the other a question mark.”

Just hours earlier, Iran announced an escalation of its nuclear program, saying that within 10 days it will breach the limit on its stockpile of enriched uranium that was set under a 2015 nuclear deal with world powers.

Last week, U.S. officials blamed Iran for attacks against Norwegian and Japanese oil tankers in the Gulf of Oman. Trump described those and other recent attacks attributed by administration officials to Iran as limited. “So far, it’s been very minor,” Trump told TIME.

Trump’s comments, made in a nearly hour-long interview with TIME, struck a different tone than the public stance of the Pentagon and other Republicans in Washington. They also cut against a series of recent diplomatic and military moves that his Administration has made amid escalating tensions with Tehran.

While Trump was speaking to TIME, Acting Secretary of Defense Patrick Shanahan announced he had authorized approximately 1,000 additional troops for “defensive purposes” in the region. “The recent Iranian attacks validate the reliable, credible intelligence we have received on hostile behavior by Iranian forces and their proxy groups that threaten United States personnel and interests across the region,” Shanahan said in a statement.

Secretary of State Mike Pompeo has insisted the U.S. is “considering a full range of options” in response to the recent attacks. When asked on CBS Sunday if that included a military response, he responded, “Of course.” On Tuesday, Pompeo is going to visit U.S. Central Command, the Tampa-based headquarters which oversees all military operations in the Middle East.

Speaking to TIME, Trump argued that the Gulf of Oman is less strategically important for the United States now than it used to be, citing China and Japan as nations that still rely on the region for significant proportions of their oil. “Other places get such vast amounts of oil there,” Trump said. “We get very little. We have made tremendous progress in the last two and a half years in energy. And when the pipelines get built, we’re now an exporter of energy. So we’re not in the position that we used to be in in the Middle East where … some people would say we were there for the oil.”

Trump said he agrees with the U.S. intelligence community’s assessment that Iran was behind the attacks, saying, “I don’t think too many people don’t believe it.” But he also downplayed Iran’s aggression, arguing that the country has adopted a less hostile posture towards the United States since he became president. “If you look at the rhetoric now compared to the days when they were signing that agreement [the 2015 Iran nuclear deal, which Trump withdrew from], where it was always ‘death to America, death to America, we will destroy America, we will kill America,’ I’m not hearing that too much anymore,” Trump said. “And I don’t expect to.”

Many of the 1,000 new troops will be deployed for security and intelligence gathering, U.S. officials say. The move is part of a larger deployment to deter what the Trump Administration calls “malign behavior” by Iran intended to damage the United States and its allies. A squadron of 12 jet fighters, several spy planes, Patriot missile batteries, a B-52 bomber task force, the USS Abraham Lincoln aircraft carrier strike group and other military assets have already been dispatched to the region.

Earlier, the Pentagon released 11 photos of the tankers, some of them close-ups, and a detailed timeline in an effort to bolster its public case that Iran attacked the ships. The new set of color photos released on Monday, some of them taken from a U.S. Navy surveillance helicopter, appear to show Iranian navy personnel and close-up markings of the damage.

Iran has denied the U.S. accusations, saying they had nothing to do with the tanker explosions.

Tensions between the U.S. and Iran have steadily increased since Trump walked away from the landmark multilateral nuclear deal a year ago. The Administration’s mounting pressure on Iran began with a war of words but has escalated toward more serious confrontations.

The Gulf of Oman is near the Strait of Hormuz at the mouth of the Persian Gulf, through which much of the world’s oil passes. It was just the latest of several recent attacks in the Middle East that the Administration has attributed to Iranian government.

Hamid Baeidinejad, Iran’s ambassador to Britain, told CNN on Tuesday that “unfortunately, we are heading towards a confrontation, which is very serious for everybody in the region.”

Trump hasn’t been shy in voicing his aversion to overseas military entanglements, but advisers such as Pompeo and National Security Adviser John Bolton have staked out more hawkish positions. “The president will consider everything we need to do to make sure — right? But what has the president said? We don’t want Iran to get a nuclear weapon,” Pompeo said Sunday.

When asked Monday whether he was considering military action against Iran, the president told TIME, “I wouldn’t say that. I can’t say that at all.” 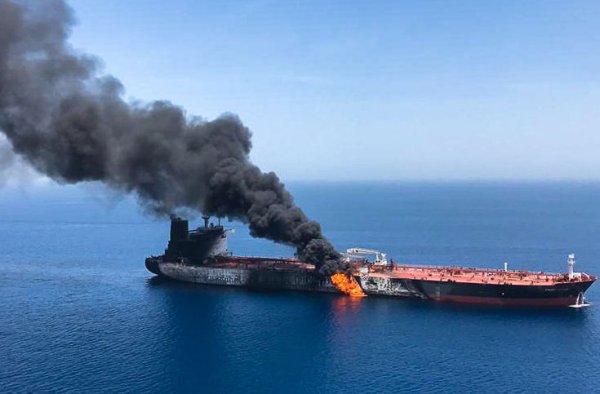 U.S. to Send Additional Troops to the Mideast
Next Up: Editor's Pick