The Enemy of My Enemy: Iran Arms Kurds in Fight Against ISIS

A Kurdish Peshmerga fighter stands guard at the Bakirta frontline near the town of Makhmur, south of Erbil, the capital of Iraqi Kurdistan on Aug. 27, 2014.
Youssef Boudlal—Reuters
By Rebecca Collard / Erbil

For months, the Kurds have been lobbying the international community for better weapons to fight the Islamic State of Iraq and greater Syria (ISIS). The U.S., France, Germany, among others, have pledged military support, but that has come slowly.

Now, it seems Iran beat them to the punch. “We asked for weapons and Iran was the first country to provide us with weapons and ammunition,” said Kurdish President Massoud Barzani in a press conference. That Iran apparently got weapons to the Kurds more quickly than the U.S. may be because of Tehran’s strategic interests in arresting the march of ISIS.

“Iran knows that if they don’t fight ISIS in Iraq today, they will have to fight them in Iran tomorrow,” said Hiwa Osman, an analyst and writer based in Erbil. The expansionist Sunni militants have clawed their way across Syria and Iraq, coming within 20 miles of the Iranian border.

Indeed, Tehran claimed to have had a direct hand in training Kurdish peshmerga. “When ISIS attacked Iraqi Kurdistan and the Kurdish officials requested help from Iran, The Islamic Republic of Iran not only gave them guidance, but also organized and prepared their forces,” Interior Minister Abdolreza Rahmani Fazl told Iran’s semi-official Mehr news agency.

Zarif, however, denied there had ever been Iranian boots on the ground, despite numerous reports to the contrary. “We do not have soldiers in Iraq, we don’t intend to send soldiers to Iraq,” he said, during his Erbil visit.

Kurdish officials, too, said Iran had merely provided material help. “We haven’t invited them to govern here, we just asked them for support,” said Sadi Ahmed Pira, a politburo member of the Patriotic Union of Kurdistan. Pira says so far they have just received light arms from Iran and that this support is welcomed and needed for the fight against the militants.

But some Kurds are skeptical about Iranian support. A man calling himself Hamid, an Iranian Kurd from near the border who has been living in Erbil for the last four years, says his people have no future in Iran. Iran has around 7 million Kurds within its borders and Tehran is uneasy about their desire for independence.

Hamid refused to give his real name, fearing repercussions from the Iranian government. “In Iran they just oppress us,” he said. “They don’t love the Kurdish people.”

On the streets of Erbil, some worry Iran is sending arms simply to boost its influence here and in the region, even at the cost of exacerbating Iraq’s sectarian divisions. “They are not doing this to support the Kurds or to defeat ISIS. Iran is sending weapons to make themselves stronger,” said Serdar Akgul, a 31-year-old Kurdish warehouse manager in Erbil, who believes Iran has used the conflict with ISIS to its advantage in Iraq. “This is Iran finding a way to benefit from all this bloodshed. And this going to badly impact the sectarian division.”

Baghdad may also view a stronger Kurdish alliance with Iran as a threat. The Kurds’ long-term objective is a Kurdistan independent of Iraq, and it looks as if they will come out of the conflict better armed, with stronger international influence and recognition than before.

Although the peshmerga initially faltered in combat with ISIS, they have proved themselves the most capable army in Iraq — though that is barely an achievement — and now see themselves as filling a vacuum left by the rapidly dwindling Iraqi forces. “If Baghdad is unable to provide security then they will have to tolerate the international community giving us the arms to do it,” said Pira.

Kurdistan already has strong economic relations with Iran and the Kurds have so far managed to juggle their alliance with the U.S., with close ties with their Iranian neighbors. And the U.S. now finds itself on the same side as another regional foe against ISIS, just as it has with Syria. American and Iranian weapons will be firing side-by-side in the hands of Kurdish peshmerga fighters.

“Our talks with the Americans is limited to the nuclear issue,” said Zairf in Erbil. “But we are prepared to talk at the international level with other countries and with the international community as a whole with regard to what is needed to be done in Iraq and in Syria and in this region.”

That may trouble the U.S. but Osman, the analyst, says that regional bonds are shifting. The regional and international dynamics are moving to more “natural” alliances than historic ones, he says. “The last alliance that ISIS will eventually break is the Gulf and America alliance. The Gulf states, Qatar, Saudi Arabia and others, are all remaining silent on the crimes of ISIS, just watching,” he said. These Sunni Gulf Arab states have long been some of the U.S.’s strongest regional allies against the likes of Syria and Iran, but those bonds are now being strained. “ISIS has created a new reality in the Middle East.”

With reporting by Kay Armin Serjoie 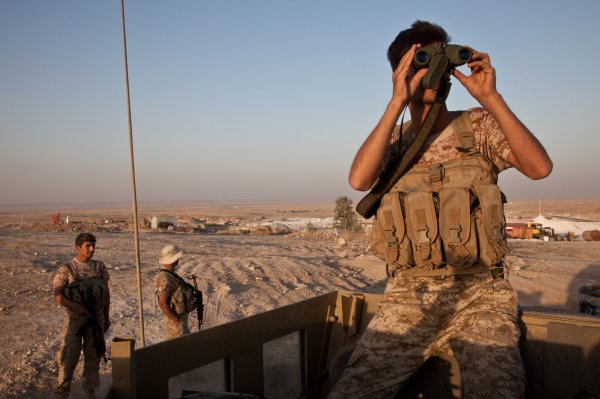 The Rise of ISIS Sows Mistrust Between Kurds and Sunni Arabs
Next Up: Editor's Pick