North Korea's 'Christmas Gift' Statement Put the U.S. on Alert Despite No Missile Launch. That May Be the Point

People watch a TV showing a file image of a North Korean missile launch at the Seoul Railway Station in South Korea on Oct 2, 2019.
Chung Sung-jun—Getty Images
By Hillary Leung

North Korea’s “Christmas gift” for the United States never arrived, although it still could.

The ominous statement from a North Korean official that “it is entirely up to the U.S. what Christmas gift it will get” had the U.S. and its allies on alert this week. Many observers predicted the North was preparing to test its first intercontinental ballistic missile (ICBM) since 2017. Since then, President Donald Trump and North Korean leader Kim Jong-un have temporarily ratcheted down tensions with face-to-face meetings. They are beginning to rise again.

Christmas came and went without a launch. Analysts say North Korea may still fire a missile. But, some say, the heightened anxiety over the North’s actions could be the point of the message.

Jenny Town, managing editor of the North Korea research group 38 North, notes that the “Christmas gift” comment was made by a lower-level official. “It wouldn’t have been uncharacteristic for them to do something like this [an ICBM test], but this was hyped up more than it should have been,” she says.

Mintaro Oba, a former U.S. State Department official who specialized in the Koreas, says the ominous statement was a “public communications tactic.”

“It tried to heighten the fear of increased tension in a language Americans would latch onto,” he says.

Earlier this month, North Korea’s vice minister of foreign affairs in charge of U.S. affairs, “reminded” the U.S. that the North had set an arbitrary deadline of the end of 2019 for progress on nuclear talks.

“[North Korea] has done its utmost with maximum perseverance not to backtrack from the important steps it has taken on its own initiative,” the official, Ri Thae Song, said in a statement on North Korea’s state news agency. “What is left to be done now is the U.S. option and it is entirely up to the U.S. what Christmas gift it will select to get.”

Perhaps in response, Aircraft Spots, which tracks U.S. military aircraft movements, found numerous U.S. surveillance aircraft flights over and around the Korean peninsula this week, including on Christmas Day. Among them: an RQ-4 Global Hawk drone; an E-8C Joint STARS ground surveillance plane; a RC-135S Cobra Ball, which is designed to detect ballistic missile launches; and a U.S. Navy P-3C Orion maritime surveillance aircraft, which can hunt submarines.

U.S. officials remain watchful. Before the year is over, Kim is expected to chair a year-end conference with his party and give a New Year’s speech. Both are opportunities that the leader could use to claim that he is working — successfully — to advance relations with the U.S.

Despite three meetings between Trump and Kim, talks over the hermit nation’s nuclear program appear to have stalled. The North has fired multiple shorter-range missiles this year with minimal response from the U.S. Analysts said North Korean leaders might expect that an ICBM launch would force the U.S. back to the negotiating table on more favorable terms.

A P-3C Orion maritime surveillance plane was one of one the U.S. military aircraft tracked over or near the Korean peninsula this week in the wake of North Korea's reference to giving a "Christmas gift" to the U.S.
Breanna Ancheta–U.S. Navy

The anticipation of an ICBM launch sparked fears that the New Year could see a return to the “fire and fury” rhetoric of 2017, when Washington and Pyongyang exchanged hostile threats as North Korea ramped up development of its nuclear and long-range missile arsenal.

Even if no test comes before the New Year, analysts say it is likely that the U.S. and its allies remain on high alert. Recent satellite images showed that Pyongyang is expanding a factory linked to the production of long-range nuclear missiles, and increased activity at North Korea’s main nuclear facility was reported last month.

“Scientists and engineers are working on North Korea’s weapons programs every day,” says Daniel Pinkston, a security and international relations expert at Troy University. “And I don’t see any signs or indications that they will stop.”

South Korea’s Yonhap News Agency reported Friday that North Korean media has been touting satellite launches in other countries, and might use the guise of a satellite launch to test an ICBM. Since the technology used for a satellite launch and an ICBM test is similar, Pinkston says, such a test could be used to refine their ICBM program.

Trump, who has bragged about his personal relationship with Kim, brushed off the “Christmas gift” comment. “Maybe it’s a present where he sends me a beautiful vase as opposed to a missile test,” he joked. 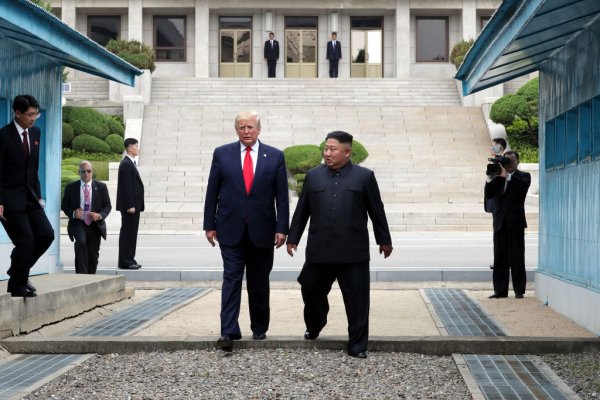 Is North Korea Getting Ready to Launch a New Missile?
Next Up: Editor's Pick