Is North Korea Getting Ready to Launch a New Missile?

Reconnaissance of a North Korean launch site indicates that Kim Jong-Un may be preparing to test a long-range ballistic missile, three U.S. intelligence officials who monitor North Korea in different agencies tell TIME. The intelligence comes ahead of a fast-approaching self-declared year-end deadline that Kim set in an April 12 speech for a nuclear deal with the U.S.

In recent weeks, North Korea has reopened its Sohae Satellite Launching Station and resumed testing what U.S. intelligence officials and private experts suspect may be a solid fuel rocket engine that could be used in an intercontinental ballistic missile capable of reaching parts of the U.S. The analysts say the missile test could be thinly veiled as a launch of a satellite so as to avoid the appearance of direct military hostility.

Kim may be gambling, the officials say, that the launch will increase the pressure on Trump to negotiate an agreement to ease economic sanctions on North Korea, while allowing Pyongyang to retain some or all of its nuclear weapons program. A missile launch would be provocative enough to get Trump’s attention, they say, but not risk the kind of ire a nuclear test would spark.

But it’s a high stakes play. If Kim gets it right, some negotiations might resume. If he’s wrong, a rocket could backfire, returning both sides to the rhetorical and economic hostility of Trump’s first year in office and giving the U.S. and its allies little choice but to watch the North advance its nuclear program or risk a military confrontation.

The last 10 days of this month could be decisive, with Kim scheduled to attend North Korean Workers Party meeting and expected to give a New Year’s address. “This is of course the proverbial inflection point,” says David Maxwell, a retired U.S. Army colonel who served extensively in Korea and is now at Washington’s Foundation for Defense of Democracies. It could be the end of the “unconventional experimental top-down diplomacy” that Trump, Kim, and South Korean President Moon Jae-in have been attempting, he says.

After an initial round of exchanging insults, the two leaders have met three times, in Singapore, Hanoi and a few feet across the North’s heavily militarized border with South Korea. Nothing has come of those meetings other than photo opportunities, with the U.S. still demanding that Pyongyang give up its nuclear weapons before it can receive any relief from economic sanctions, and Kim continuing to seek recognition as a nuclear power and guarantees that his country will not be attacked. The Korean War ended in 1953 with an armistice, not a peace treaty.

Now Kim has promised the U.S. a “Christmas gift”, and Trump has resumed calling the North Korean leader “Rocket Man”, although the exchanges have not returned to 2017’s threats of “fire and fury.” Indeed, both leaders have left the worst name-calling to their subordinates, with some of Kim’s team calling Trump, who is twice the North Korean dictator’s age, “a heedless and erratic old man” and a “dotard.”

As tensions have mounted this autumn, the Trump administration has also blocked a United Nations Security Council meeting on North Korea’s well-known human rights abuses, a move that drew harsh criticism from Democratic presidential hopeful Joe Biden and John Bolton, one of Trump’s three former national security advisers, who said North Korea will never relinquish its nuclear weapons unless it is forced to do so.

This week, messages coming from the U.S. have been mixed. Speaking at Washington’s Center for Strategic and International Studies on Thursday, Assistant Secretary of State David Stilwell, a retired Air Force general, warned North Korea against resuming any “unfortunate ill-advised behavior.” At a separate United Nations Security Council meeting on North Korea called by the U.S. on Wednesday, American Representative Kelly Craft struck a different note, saying the U.S. is prepared to “simultaneously take concrete steps toward a deal,” a suggestion Pyongyang’s Foreign Ministry promptly dismissed.

Taken together, these moves indicate that Trump and Kim haven’t given up on their personal diplomacy, officials say. Trump tweeted last weekend that “Kim Jong-Un is too smart and has far too much to lose, everything actually, if he acts in a hostile way.” Moreover, Trump added, underscoring his personality-based brand of diplomacy, Kim “does not want to void his special relationship with the President of the United States”.

Kim, the U.S. officials say, appears to be betting that Trump is eager for a fourth summit with him next year and may have concluded that he can use a long-range rocket to launch a satellite, even if it sails over U.S. ally Japan.

“Kim is leaving some space for diplomacy,” says Maxwell. “He has two near-term objectives: sanctions relief and recognition as a nuclear power. He is under tremendous internal pressure because he has failed since his summit with Trump in Singapore to get sanctions relief. Kim is not a strategic thinker — he is simply following the Kim family ‘art of the deal’ or playbook which is based on blackmail diplomacy — the use of provocations or increased tensions to gain political and economic concessions.”

Kim appears to have concluded earlier this year that he cannot get what he wants without applying more pressure, not only on Trump, but also on South Korea’s Moon, who is facing an election and is eager to improve relations with the North. When U.S. and North Korean negotiators met in Stockholm in October, the session lasted one day and the North Koreans came armed with a prepared statement denouncing the U.S. for clinging to an “old stance and attitude.”

Kim also must recognize that Trump’s transactional demands that Japan and South Korea pay more to support U.S. forces assisting in their defense and the reduction of joint U.S.-South Korean military exercises are taking a toll on the allies’ faith that Washington will honor its commitments to help defend them. At the same time, relations between Seoul and Tokyo have soured again, and the Trump administration has done little to remedy that. In the past, the U.S. has played a larger part in encouraging both countries to put their history behind them.

“I think the U.S. failure to resolve the issue of North Korea’s nuclear challenge is having a corrosive effect, along with a lot of other things, on the core idea that the U.S. is the indispensable partner for Seoul and Tokyo,” says Jeffery Lewis, an arms control expert at the Middlebury Institute of International Studies in Monterey, California. “North Korea’s nuclear and missile programs are moving a lot faster than most people realize,” says Lewis. “I think 2020 might contain quite a few surprises.”

While it’s possible that Trump may not view a satellite launch as a threat to the continental U.S., some military and intelligence officials do, especially if the new rocket uses a solid-fuel engine. So far, North Korea has relied on liquid-fueled engines for its longest-range missiles, which can be readily detected by spy satellites because they have to be fueled shortly before they are launched, which takes time. The other missing piece of the North’s long-range threat is a reliable re-entry vehicle capable of carrying a nuclear warhead, which a satellite launch would not reveal.

Resuming nuclear testing would be much riskier to both the North’s chances of cutting a deal with Trump and to its relations with China, the officials say, and intelligence satellites so far have not detected preparations for a resumption of nuclear testing. By launching a satellite, even over Japan from a site in western North Korea, Kim may think he can increase the pressure on Trump to resume negotiations without openly violating his April 20, 2018, agreement to halt testing.

But if the North Korean leader has overestimated his leverage, he might resume long-range missile and even nuclear testing, and it’s not clear how Trump might respond to that. As one of the U.S. officials put it: “Kim is more predictable than the President.” 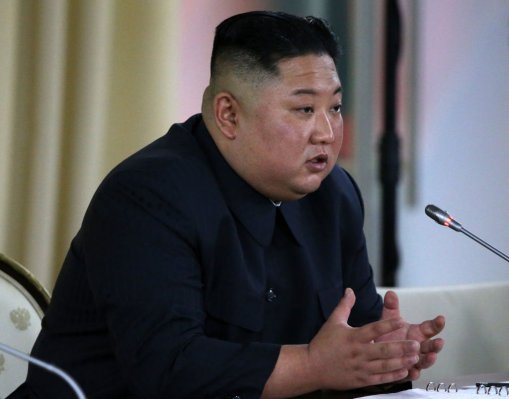 North Korea Says It's Preparing a Choice of 'Christmas' Gifts for Trump in Veiled Threat
Next Up: Editor's Pick