A War of Fiery Words, for Now, Between North Korea and the U.S.

North Korea‘s relationship with the U.S. has always been rooted in bitter acrimony, with its periodic threats of annihilating America sounding almost quaint, coming, as they do, from an impoverished nation of 25 million. But never before has Pyongyang’s bluster been matched by a U.S. President’s. On Aug. 8, Donald Trump said the U.S. would unleash “fire and fury like the world has never seen” against the regime of Kim Jong Un after Pyongyang vowed to retaliate “thousands of times” against Washington for new U.N. sanctions.

Hours after Trump made his comments at his golf club in Bedminster, N.J., North Korea said it was “examining” a strike on American forces on the Pacific island of Guam. Then a tweet was sent out by U.S. Pacific Air Forces showing a picture of two B-1 bombers flanked by two F-15 fighter jets with the message: “ready to #fighttonight.” Former acting CIA director Mike Morell called the situation the most serious one since the 1962 Cuban missile crisis, the closest the globe came to nuclear war.

Yet the restraints that have prevented open conflict so far remain in place. If North Korea attacks the U.S. or its allies, the overwhelming response will mean the end of Kim’s regime. If the U.S. strikes North Korea, Pyongyang possesses enough conventional firepower to devastate nearby Seoul and possibly also Tokyo, at a cost of at least many thousands of lives. North Korea’s escalating missile and nuclear tests appear to have given it the capability to strike America with a nuclear-armed missile. Citing U.S. intelligence, the Washington Post has reported that Pyongyang may already have miniaturized a warhead that can fit inside long-range ballistic missiles, like the two it tested last month. Starting a nuclear war in order to force a rogue state to denuclearize doesn’t satisfy even the most rudimentary cost-benefit analysis.

The saber rattling came as the world piled more economic pressure on Kim. On Aug. 5, the U.N. Security Council unanimously passed Resolution 2371, which targets a third of North Korea’s $3 billion worth of foreign earnings–mainly iron, lead, coal and seafood exports–plus revenues through its banks and foreign ventures. U.S. Ambassador to the U.N. Nikki Haley called it “the most stringent set of sanctions on any country in a generation.”

Resolution 2371 passed because China and Russia did not veto it. The key is Beijing. Were China, which is responsible for 90% of North Korea’s trade, to enforce its considerable part of the sanctions, Pyongyang would suffer a balance-of-payments deficit that could lead to spiraling costs and instability and possibly bring Kim to the negotiating table. Already North Korea is suffering grain shortages after a parched spring. At a regional conference in Manila, Chinese Foreign Minister Wang Yi said he warned his North Korean counterpart Ri Yong Ho, “Do not violate the U.N.’s decision or provoke the international society’s goodwill by conducting missile launching or nuclear tests.”

China’s cooperation does not come free. In exchange for a freeze on Pyongyang’s nuclear program, Beijing would like U.S. THAAD antimissile batteries withdrawn from South Korea and joint military drills nixed between Seoul and Washington (North Korea deems them a dress rehearsal for invasion). Moreover, Beijing will not allow the Kim regime to collapse when the result would be a flood of refugees, and possibly U.S. troops on its doorstep, on a unified, U.S.-allied Korean peninsula.

The hope is that Kim returns to the six-party talks–comprising North and South Korea, Japan, Russia, China and the U.S.–on denuclearization, which ran from 2003 to 2009 before his father Kim Jong Il walked away. During informal Track II meetings with U.S. representatives, however, North Korean officials repeatedly raised the fates of Iraqi dictator Saddam Hussein and Libyan tyrant Muammar Gaddafi, both of whom were toppled by U.S.-backed uprisings after abandoning their pursuit of nuclear weapons.

“We do not seek a regime change [in Pyongyang],” U.S. Secretary of State Rex Tillerson said on Aug. 1. “We do not seek the collapse of the regime.” Kim is unlikely to buy this. But unless he returns to talks, the world has little choice but to accept North Korea as the world’s newest nuclear power–or face the calamity of “fire and fury.” 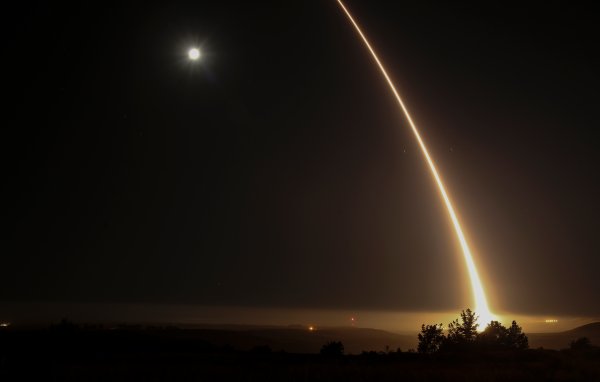 Here's How Many Nuclear Weapons the U.S. Has
Next Up: Editor's Pick