Trump Has Been Unrealistic About His Talks With North Korea. Here's Why We Shouldn't Dismiss the Meetings Altogether

Ideas
By Gloria Steinem , Christine Ahn , Abigail Disney , Suzy Kim and Jody Williams
Gloria Steinem is a writer, lecturer, political activist, and feminist organizer.
Christine Ahn is Executive Director of Women Cross DMZ, a global movement mobilizing for peace on the Korean Peninsula.
Abigail Disney is a documentary filmmaker, philanthropist and activist.
Suzy Kim is associate professor of Korean history at Rutgers University, and author of Everyday Life in the North Korean Revolution, 1945–1950.
Jody Williams received the 1997 Nobel Peace Prize for her work to ban antipersonnel landmines. She is the Chair of the Nobel Women’s Initiative.

Believe us, we know that the continuing saga between the United States and North Korea is confusing and complicated. We understand the temptation to get caught up in — and be skeptical of — the theatrics. But in our work as activists and academics, we’ve all been to the Demilitarized Zone, met North Korean women and immersed ourselves deeply in this issue. And, at this critical moment, we implore you all to remember that what happens next is bigger than either Trump or Kim.

This is because the Korean War persists nearly 70 years on, and we are now presented with a real opportunity to end it. Many Americans may not realize that there was never a peace agreement or a formal end to the war in which up to 4 million people were killed. In 1953, a temporary ceasefire was signed by U.S. and North Korean military commanders, with a recommendation to return in 90 days to negotiate a political settlement. That never happened. It may seem like a technicality, but to millions of Koreans, it’s a reality.

This lingering state of war is the root cause of tensions and distrust between the United States and North Korea. It prevents North and South Korea from meaningful cooperation and keeps millions of Korean families separated, unable to communicate with, see or embrace their loved ones. The so-called Demilitarized Zone (DMZ) has one of the highest concentrations of landmines on earth. Crushing sanctions contribute to hunger and illness in North Korea, particularly harming the livelihood of women and the well-being of children by preventing proper food and supplies from getting into the country. The DMZ is an ever-present reminder that, at any moment, active hostilities could resume. And were nuclear weapons used, upwards of 25 million people on either side of the border could be impacted, including at least 100,000 U.S. citizens living in South Korea. That’s no small matter.

Yet the predominant reaction to Trump and Kim’s meeting seems to be that diplomacy is a giveaway to North Korea, that it “legitimizes” Kim Jong Un and that no engagement should proceed without their commitment to denuclearization and improving human rights. But these arguments do not get us closer to addressing these urgent matters.

That’s why we are calling for a formal end to the Korean War at this critical juncture because only by mending the past can we move forward. The impact of ending the Korean War would be wide-ranging, stretching far beyond the current political reality.

Real, successful diplomacy requires step-by-step reciprocal actions and confidence-building, not “grand bargains” and all-or-nothing demands. This was why talks broke down between the U.S. and North Korea last time, when Trump and Kim Jong Un met in Hanoi. The United States — with an assist from John Bolton, who has spent decades sabotaging U.S.-North Korea negotiations — asked for North Korea’s unilateral denuclearization prior to any sanctions relief or other steps from the United States. That’s totally unreasonable and unrealistic, and it’s not the path forward. We need to see continued, flexible talks to find steps toward our mutual larger goals — including a peace agreement.

Peace lays the foundation for a relationship between two historic enemies to address difficult matters. It isn’t a gift to North Korea or an endorsement of the government’s actions; peace is the means that allows us to achieve our goals. It is a necessary condition for normalization of relations and denuclearization. In fact, peace and real diplomacy are the only keys that can actually unlock big successes when it comes to nuclear weapons and human rights. Decades of isolation, sanctions and threats haven’t worked. We desperately need a new path.

The U.S. Congress can and should help forge that new path by passing H. Res. 152, which calls for a formal end to this war that was supposed to be resolved more than a half-century ago.

We’re in a delicate situation and have a rapidly closing window of opportunity that will set a precedent that lasts much longer than Trump’s presidency, and probably longer than any of us will be alive. A nearly 70-year history of militarism, tensions and hostilities lies behind us. A safer, more secure and more hopeful future could lie before us. It’s up to us to demand it. 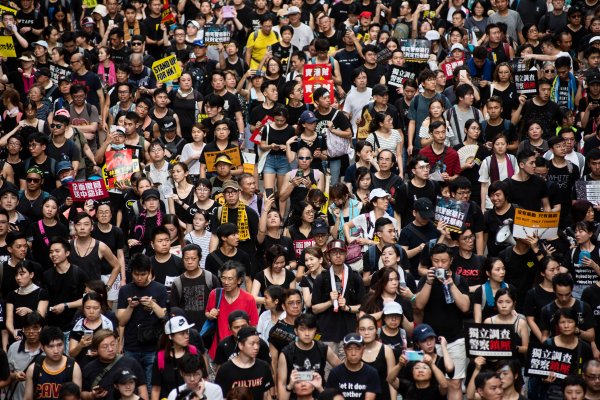 Hong Kong Needs a Deep Dialogue of Reconciliation
Next Up: Editor's Pick