Can a North Korean Missile Hit the U.S.? Here’s What the Experts Say

North Korea conducted its most powerful missile test yet Wednesday, raising concerns that the regime of Kim Jong Un could soon be capable of targeting cities on the U.S. east coast, including Washington, D.C.

The country’s state media lauded the launch as a “priceless victory,” declaring that the intercontinental ballistic missile could be armed with a “super-large heavy nuclear warhead” that was capable of targeting the “whole mainland” of the U.S.

The missile test, North Korea’s first in nearly 10 weeks, shattered a brief respite in tensions on the Korean Peninsula. But the launch signals that President Donald Trump’s threatening rhetoric and economic pressure have not been enough to stall North Korea’s missile and nuclear weapons program, which has shown marked development in 2017.

Wednesday’s missile test lasted 53 minutes, traveling nearly 620 miles before landing about 200 nautical miles of the coast of Japan, according to the Associated Press. North Korea’s state television channel KCTV said the launch tested a new rocket model, called Hwasong-15, which is “significantly more” powerful than the country’s previous long-range missile that was tested in July.

The missile test was North Korea’s 20th this year, and marked a significant leap in capabilities over its early-2017 launches of intermediate-range Pukguksong-2 and Hwasong-12 missiles. Those launches also tested a solid-fuel engine and mobile launchers, which make the missiles easier to relocate and deploy on short notice. In September, North Korea also carried out a 120 kiloton nuclear test, its sixth, which the country claimed was a hydrogen bomb.

So can North Korea now hit the U.S.?

Wednesday’s missile reached an altitude of 2,800 miles, higher than any previous launch — and ten times higher than the International Space Station, which orbits at an altitude of about 250 miles. But if launched at a more conventional, flattened trajectory, the Hwasong-15 could have a potential range of more than 8,100 miles, which would be “more than enough range to reach Washington, D.C., and in fact any part of the continental United States,” physicist David Wright wrote for the Union of Concerned Scientists, a nonprofit science advocacy organization.

Previous tests of Hwasong-14 missiles in July were estimated to have a potential range of 6,200 miles, according to analysts, which would encompass cities such as Chicago or Denver. In August, North Korean leader Kim Jong Un threatened the U.S. Pacific territory of Guam, which also hosts 6,000 U.S. military personnel.

But analysts suggest that the Hwasong-15 may have been outfitted with a lighter, “dummy” warhead that would have extended its flight capabilities. Whether North Korea could equip an ICBM with a nuclear payload is still unclear, but a leaked Defense Intelligence Agency report claimed North Korean scientists had successfully miniaturized a nuclear warhead, the Washington Post reported in August.

“A viable ICBM capable of reaching the west coast of the U.S. mainland is still a year away, though North Korea continues to progress,” he said in a statement provided to TIME.

Who is in the line of fire?

While this latest missile test may have brought more American cities into Pyongyang’s crosshairs, Japanese and South Korean leaders have been forced to contend with the threat of a North Korean attack for decades.

A recent report by 38 North estimated that North Korea’s nuclear arsenal, if deployed at once, could cost up to 2.1 million lives in Tokyo and Seoul alone. The South Korean capital is particularly vulnerable, as it is within range of conventional weapons from its hostile northern neighbor.

“They’ve been in the firing line for decades,” says Daniel Pinkston, a Korea expert at Troy University in South Korea, adding that the threat to American cities raised fears “of the U.S. being decoupled from its treaty partners in Northeast Asia.”

But he downplayed the probability of an armed attack from either side. “North Korean leadership is hyper rational, they’re secular, and they wish to survive,” Pinkston tells TIME.

The likelihood of a “double freeze” of North Korea’s weapons development in exchange for ceasing U.S.-South Korean joint military exercises, seems as distant as ever. President Trump promised to “handle” North Korea, telling reporters at the White House, “we will take care of it.” Sen. Lindsay Graham echoed the President’s tough rhetoric, telling CNN that “we’re headed to a war if things don’t change.”

“China’s not going to take actions that will destabilize North Korea,” Pinkston says, adding that China was unlikely to back an “economic blockade” on the hermit kingdom.

“They will occasionally inflict some punishment to signal their dissatisfaction with North Korean behavior, but that’s temporary and calibrated to send a message, not to push North Korea over the brink,” he says.

With only 73 days until the 2018 Winter Olympics open in Pyeongchang, South Korea, Kim Jong Un has made it clear that North Korea’s weapons program is not going away anytime soon. 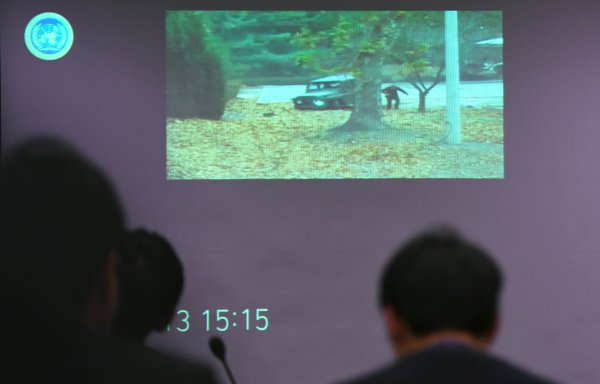 North Korea Is Fortifying the Spot Where a Solider Made a Dramatic Dash to the South
Next Up: Editor's Pick