These Are the House Members Who Broke Party Lines on Impeachment

Wednesday night’s historic vote to impeach President Donald Trump followed almost entirely party lines—with every Republican voting against impeachment. However, four Democrats broke with the rest of their colleagues in some way.

Among them was 2020 Democratic presidential candidate Rep. Tulsi Gabbard, of Hawaii, who voted “present” on both articles of impeachment. Gabbard later criticized the impeachment proceedings as a “partisan endeavor.”

“I could not in good conscience vote against impeachment because I believe President Trump is guilty of wrongdoing,” she said in a statement.

“I could also not in good conscience vote for impeachment because removal of a sitting President must not be the culmination of a partisan process, fueled by tribal animosities that have so gravely divided our countries.”

In the Wednesday night vote, House Democrats formally approved two articles of impeachment for Trump: that he allegedly abused the power of his office by linking foreign aid to Ukraine to an investigation of political rival Joe Biden and that he allegedly obstructed Congress’ ability to hold him accountable.

Three Democrats opposed one or both of the articles of impeachment against Trump.

Minnesota Rep. Collin Peterson voted against both articles of impeachment, as did New Jersey Rep. Jeff Van Drew, who is expected to switch to the Republican party.

Democrat Jared Golden of Maine voted “no” against the article accusing the president of obstruction of Congress, but supported impeachment for abuse of power.

No Republicans voted to impeach the President, but Justin Amash, an independent who quit the Republican party in July, supported both articles of impeachment.

Van Drew’s reported plans to join the GOP caused an uproar among his staff. Five of his aides announced their resignation on Sunday, saying his party switch “does not align with the values we brought to this job when we joined his office.”

Peterson, on Facebook, said he opposed to partisan nature of the process: “The inquiry and hearing have been partisan and have failed in convincing the country while further placating some people who have wanted the president impeached since he was elected.”

Golden, in a Facebook post, said that the President’s conduct crossed a red line, but: “While the president’s resistance toward our investigative efforts has been frustrating, it has not yet, in my view, reached the threshold of ‘high crime or misdemeanor’ that the Constitution demands.”

Three lawmakers missed the vote: Illinois Republican John Shimkus, California Republican Duncan Hunter and New York Democrat José Serrano. Shimkus was traveling outside the country, according to the Associated Press. Hunter, who pleaded guilty to using campaign money for personal expenses in early December, was warned by the House Ethics Committee not to vote. Serrano was hospitalized earlier this month following a fall.

Trump is the only elected first-term president and only the third president in American history to be impeached. He will face a trial in the U.S. Senate over whether he should be removed from office. That outcome is seen as unlikely—Republicans hold a majority in the upper chamber and removal requires approval by two-thirds of senators. 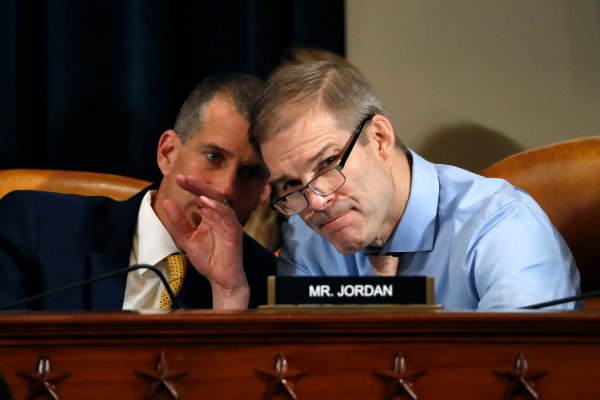 How House Republicans Stayed Unified on Impeachment
Next Up: Editor's Pick