New Jersey Rep. Jeff Van Drew, one of the lone Democrats not supporting the impeachment of President Donald Trump, is expected to switch to the Republican Party, according to a senior Democratic aide.

Van Drew is one of the most moderate members of the Democratic caucus and among the 31 lawmakers who flipped districts in the midterm elections that Trump carried in 2016. He has not publicly announced his decision, and his office did not immediately respond to TIME’s request for comment.

The Washington Post reported on Saturday that Van Drew had met with Trump on Friday at the White House, where the President had encouraged him to join the Republican party.

While Van Drew’s expected decision to switch his allegiance will likely dovetail with the House vote on impeachment, internal polling from his campaign showed he was facing an uphill battle in his district. According to internal polling from earlier this month, just 24 percent of likely Democratic voters in his district said he deserved to be re-elected to Congress, and 58 percent said another candidate deserved the Democratic nomination.

But the New Jersey primary is not until next June, and no candidates have officially stepped up to challenge him yet. The timing of his announcement, should it come soon, will almost certainly give Republicans a chance to declare victory about the political climate surrounding impeachment. Van Drew and Minnesota Rep. Colin Peterson were the only two Democrats to vote against the House resolution laying out the steps of the impeachment inquiry on October 31. As the inquiry intensified, morphing into two articles of impeachment that are poised to pass the House this coming week, he remained adamantly opposed. He consistently argued Democrats were setting a dangerous precedent for future presidencies by wielding impeachment, particularly because of the strong likelihood of Trump’s acquittal in the Senate.

“He will be exonerated in the Senate, he will talk about that a lot, [and] it will probably help his election. That’s what we’ve accomplished,” he told reporters earlier this month. “At the same time now, impeachment may become more of a regular, ‘Hey we’re getting used to this process, we may do this more often when we don’t like something.'” 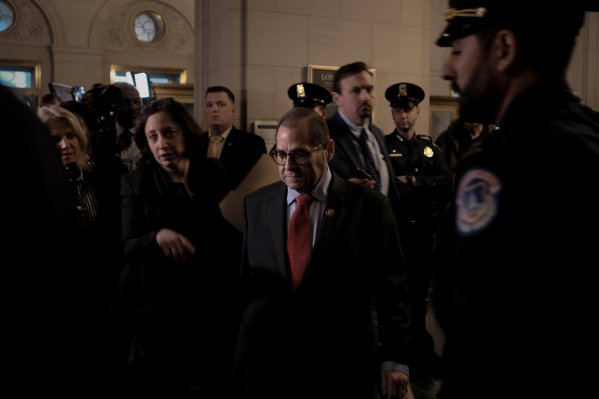