The October Democratic presidential primary debate kicked off Tuesday with the question that has taken over Washington D.C. in recent weeks: Should President Trump be impeached?

All of the candidates in the Democratic race support an impeachment inquiry into Trump, which began after a whistleblower filed a complaint alleging that Trump had pressured the president of Ukraine to investigate former Vice President Joe Biden and his son, Hunter Biden. The moment marked a significant difference from past debates, which have typically begun on the topic of healthcare.

Massachusetts Sen. Elizabeth Warren answered first, after being asked why Congress, rather than voters, should decide whether Trump should be impeached.

“Because sometimes there are issues that are bigger than politics, and I think that’s the case with this impeachment inquiry,” Warren said.

See what each 2020 Democratic presidential primary candidate said about impeaching Trump below.

Warren said she called for opening an impeachment inquiry after reading the Mueller report.

“Now that didn’t happen. And look what happened as a result,” she said. “Donald Trump broke the law again this summer, broke it again this fall.”

Warren said impeaching Trump was important to set a precedent for future presidents.

Former Vice President Joe Biden, whose son’s business ties in Ukraine are near the center of the impeachment inquiry, was asked whether Democrats have been careful enough in pursuing impeachment. Biden agreed with Sanders’ assessment that Trump is “corrupt.”

“The fact is that this President of the United States has gone so far as to say, since this latest event, that, in fact, he will not cooperate in any way at all, will not list any witnesses, will not provide any information, will not do anything to cooperate with the impeachment,” he said. “[Democrats] have no choice but to move.”

Vermont Sen. Bernie Sanders said Democrats have no choice but to impeach Trump, calling him the “most corrupt president in the history of this country,” adding that Senate Majority Leader Mitch McConnell should do “the right thing” and ” allow a free and fair trial in the Senate.”

“In terms of the recent Ukrainian incident, the idea that we have a President of the United States who is prepared to hold back national security money to one of our allies in order to get dirt on a presidential candidate is beyond comprehension,” he said.

California Sen. Kamala Harris defended her call to impeach and remove Trump for office as fair to the President.

“It’s just being observant because he has committed crimes in plain sight,” she said. “He told us who he was.”

She continued: “As a former prosecutor, I know a confession when I see it. And he did it in plain sight. He has given us the evidence.”

New Jersey Sen. Cory Booker said impeachment proceedings had to be “fair” and “about patriotism and not partisanship.”

“We have to conduct this process in a way that is honorable, that brings our country together, doesn’t rip us apart,” he said. “Anybody who has criticisms about a process that is making all the facts bare before the American public, that works to build consensus, that’s what this nation needs, in what is a moral movement and not a political one.”

Asked what she thought about the criticism that impeachment is a “distraction,” that could potentially backfire on Democrats, Minnesota Sen. Amy Klobuchar said, “We can do two things at once.”

“We have a constitutional duty to pursue this impeachment, but we also can stand up for America, because this President has not been putting America in front of his own personal interests,” she said. “When he made that call to the head of Ukraine, he’s digging up dirt on an opponent. That’s illegal conduct. That’s what he was doing.”

Former Housing and Urban Development Secretary Julián Castro also said the impeachment inquiry is not a distraction from other issues. “We can walk and chew gum at the same time,” he said. “We have to impeach this President. And the majority of Americans not only support impeachment, they support removal. He should be removed.”

“This is not just about holding the President accountable, for not just the things emerging in these investigations, but actions that he has confessed to on television,” he said. “It’s also about the presidency itself, because a president 10 years or 100 years from now will look back at this moment and draw the conclusion either that no one is above the law or that a president can get away with anything.”

The only House Democrat on the debate stage, Hawaii Rep. Tulsi Gabbard was also the last candidate to announce her support for an impeachment inquiry into Trump.

“The serious issues that have been raised around this phone call that he had with the president of Ukraine and many other things that transpired around that are what caused me to support the inquiry in the House,” she said. “And I think that it should continue to play its course out, to gather all the information, provide that to the American people, recognizing that that is the only way forward.”

Tom Steyer, a billionaire executive who has called for impeachment for two years, said it’s what the American people want.

“They’re the voice that counts,” he said.

Entrepreneur Andrew Yang was the first candidate to connect the topic of impeachment to broader issues.

“I support impeachment, but we shouldn’t have any illusions that impeaching Donald Trump will, one, be successful or, two, erase the problems that got him elected in 2016,” he said. Then, addressing Ohio voters, Yang asked, “Why did Donald Trump win your state by eight points? Because we got rid of 300,000 manufacturing jobs in your towns. And we are not stopping there. How many of you have noticed stores closing where you work and live here in Ohio? Raise your hands.”

Former Congressman Beto O’Rourke said Trump had to be held accountable for his actions.

“We have a responsibility to be fearless in the face of this President’s criminality and his lawlessness,” he said. “If we do not hold him to account, if there is not justice, not only have we failed this moment, our Constitution and our country, but we have failed everyone who has sacrificed and laid their lives down on the line.” 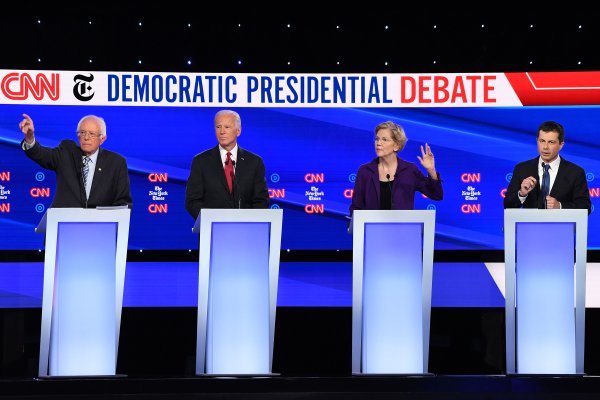 The Biggest Moments From Tuesday's Democratic Debate
Next Up: Editor's Pick