Chinese Premier Li Keqiang met with Hong Kong’s leader Carrie Lam on Monday, and said the semiautonomous territory has yet to “come out of its dilemma” as protests continue to roil the city and disrupt the economy.

Speaking at the Great Hall of the People in Beijing, Li insisted more needs to be done to “study the deep-rooted conflicts and problems in Hong Kong’s society and economy.”

Pointing to the recession Hong Kong has fallen into, he said, “The city is facing unprecedented, serious and complicated situations,” according to the Hong Kong government’s video of his remarks.

This is the first meeting between Lam and Li, China’s head of government, since the protests broke out in June. Lam, who is in Beijing for an annual visit, also met with Chinese President Xi Jinping later in the day. Xi said this is the most critical year for Hong Kong since it was returned to mainland China in 1997.

In November, Xi reiterated his support for Lam and instructed Hong Kong to end violence in the city.

Lam’s sit-downs followed a weekend of protests in Hong kong that ended in police firing tear gas to disperse crowds in the tourist district of Mong Kok. Two journalists were injured in the chaos, including a reporter for a campus publication who was struck by a police-fired projectile near his eye, according to local media reports.

Earlier that day, protesters gathered at shopping centers across the city, and vandalized restaurants perceived to have mainland Chinese ties in at least one mall.

In a separate event Sunday, police supporters held a rally for the embattled force, which has been accused of being excessive in its response to the protests. According to police estimates, 10,000 people attended the demonstration at a park along the harbor front.

The anti-government protest movement, which began in June over a controversial extradition bill, passed the sixth-month mark last week.

While relative peace followed the pro-democracy camp’s landslide victory in the city’s local elections, the protests have become increasingly violent compared to its early days. Last week, police said they deactivated two home-made bombs at a high school. The report followed the discovery of weapons — including a semi-automatic pistol and five magazines — that police believed were going to be used during a large weekend march. 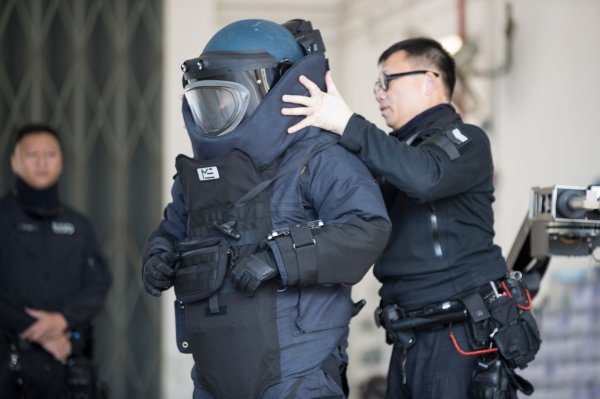