A demonstrator holds a U.S. flag during a rally in Hong Kong on Oct. 14, 2019.
Chan Long Hei—Bloomberg/Getty Images
By Hillary Leung / Hong Kong

In a White House statement released Wednesday, Trump said he approved the Hong Kong Human Rights and Democracy Act “out of respect for President Xi, China, and the people of Hong Kong,” and hoped it would allow leaders in mainland China and Hong Kong to “amicably settle their differences.” Anti-government protests demanding greater autonomy from Beijing have roiled the city for close to six months.

The law, proposed when the protests broke out in June, will require the State Department to annually assess whether Hong Kong retains sufficient political autonomy to continue to qualify for favorable trading terms with Washington. If not, it could lose its special trade status and thus find its exports subject to the same tariffs that the U.S. imposes on Chinese goods.

While Hong Kong’s democracy movement heralded the signing of the bill as a victory, Beijing slammed the U.S. for interfering in what it considers “internal affairs” and summoned ambassador Terry Branstad to “strongly protest” the move. A statement published Thursday by China’s Ministry of Foreign Affairs said the passage of the law revealed the Washington’s “sinister intentions” and that Beijing “firmly opposed” its signing. “We advise the U.S. not to act arbitrarily, otherwise we will resolutely counteract,” it warned.

The Hong Kong and Macao Affairs Office, Beijing’s top body in the city, called the U.S. the “biggest black hand.”

Read more: Trump Has Just Signed Off on Legislation Aimed at Protecting Human Rights in Hong Kong. Here’s What to Know

The Hong Kong government published a statement Thursday calling the passing of the act “unnecessary and unwanted,” as well as “not conducive to alleviating the situation in Hong Kong.”

Along with the Human Rights and Democracy Act, Trump also signed a bill that prohibits the sale of U.S.-made tear gas and rubber bullets to the Hong Kong police.

The news is a boost to Hong Kong’s protestors, who were already celebrating the results of last weekend’s local elections. The polls, widely seen as a de facto referendum on the months-long movement, saw the city’s pro-democracy camp win control of 17 out of 18 district councils.

Protestors are planning a “Thanksgiving rally” Thursday evening in the central business district to hail what appears to be the first piece of foreign legislation passed in support of the Hong Kong movement. More protests, including a rally by secondary school students, are planned for the coming days. 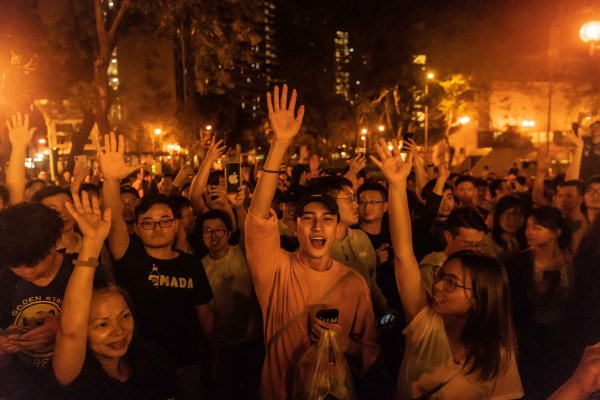