Anti-Government Protests Have Rocked Hong Kong for Six Months. Here's a Look Back at the Major Developments

What started off as Hong Kong’s summer of protest has now reached the six-month mark, a reflection of the lack of political compromise on both sides. On June 9, a million people (according to the organizer’s estimate) peacefully took to the streets, decrying what they saw as China’s encroachment on the semi-autonomous enclave’s cherished liberties. Since then, the protests have become considerably smaller but more violent. They also show no signs of abating.

As the movement hits its half-year anniversary, here are five things to know about it.

A divisive bill that would have allowed suspects to be extradited to mainland China for the first time was formally withdrawn on Oct. 23. The move was seen as a victory by protestors, who feared the bill would be used by Beijing to round up dissidents and critics in the territory. But most saw the withdrawal as coming too late. A key protest slogan, “five demands, not one less,” reflects the broadening of the movement beyond the extradition bill controversy. The additional demands include calls for a directly elected leader of Hong Kong and an investigation into police handling of the protests.

Protestors and authorities have dramatically escalated the use of force

Teargas-filled streets, petrol bombs and arson have become the norm at protests. According to official figures, more than 6,000 protestors — a significant number below the age of 18 — have been arrested on charges ranging from criminal damage to participating in a riot. Police have fired around 16,000 rounds of tear gas and 10,000 rubber bullets. Three protestors have been shot with live rounds, including a 21-year-old critically injured last month. A street cleaner reportedly filming violent protestors died after being struck in the head by a brick, and a man was set on fire during an argument with protestors. Around 480 police officers have also been injured, including one slashed in the neck with a box cutter and another shot in the thigh with a bow and arrow. The government has time and again condemned the use of force and asked citizens to “say no” to violence, but extremists have refused to switch tactics. Peaceful campaigners have also failed to disown the violent behavior of radicals.

In October, the government activated an emergency ordinance to outlaw the wearing of face masks. The move sparked a night of severe clashes as hard line protestors took to the streets in response, furious that Hong Kong’s top official had bypassed legislators to invoke the law. Last month, the city’s highest court ruled the mask ban unconstitutional. In response, Beijing condemned the verdict, countering that only the National People’s Congress — China’s legislature — had the right to decide on what was constitutional or otherwise for Hong Kong. The saga raised questions about the future of judicial independence in the territory, reinforcing protesters’ fears that Beijing was eroding its freedoms.

Protestors have incessantly appealed to foreign governments to support the city’s movement, believing they are unable to counter Beijing, the world’s largest authoritarian regime, on their own. Prominent activist Joshua Wong led a delegation to the White House in September to advocate the passing of the Hong Kong Human Rights and Democracy Act, which Trump signed into law last month. The legislation requires the State Department to annually assess whether Hong Kong retains sufficient political autonomy to continue to qualify for favorable trading terms with Washington, and also stipulates that Chinese or Hong Kong officials deemed responsible for violating human rights could face sanctions. Protestors, who have waved flags of other countries at marches, have also demonstrated outside the U.K. consulate calling for their former colonial power to “help” Hong Kong.

While Beijing has acted with relative restraint, taking no concrete action beyond condemning the violence and reminding the city that it can intervene at any time, it has increasingly made its presence known. In August, a Hong Kong citizen who works at the U.K. consulate was detained in neighboring Shenzhen, for a “legal violation.” Last month, the detainee said he was tortured by Chinese authorities and pressed for information about the city’s protests. Meanwhile, in a deft PR stunt that may have been a warning to radicals, soldiers from the Chinese garrison emerged from their barracks last month to clear roadblocks and debris left by protestors. “We volunteered! Stopping violence and ending chaos is our responsibility,” one soldier reportedly said, quoting a phrase used by President Xi Jinping. Some soldiers wore basketball shirts bearing the name of a crack anti-terrorism unit. 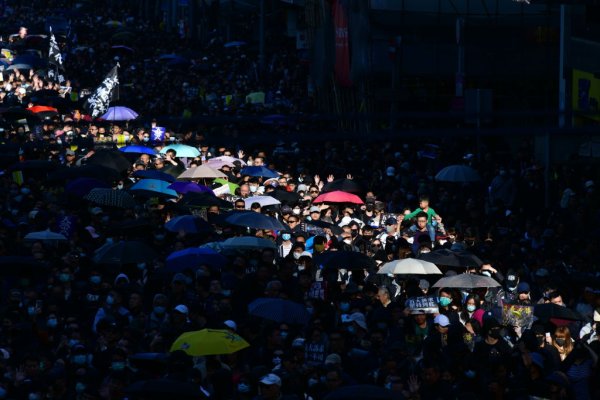