Hong Kong's Democracy Parties Scored Big in Local Elections. Here's What That Means for Their Movement

Pro-democracy parties won a landslide victory in Hong Kong on Sunday, in an election that was widely seen as a barometer of public sentiment for anti-government protests that have gripped the city since June.

A record-breaking number of voters braved long lines, which began forming at polling stations under a heavy police presence as early as 6:30 a.m., to cast their ballots in the district council elections. As of noon on Monday, voters had delivered 17 of the city’s 18 districts to pro-democracy candidates, according to local media. All of the districts were previously controlled by pro-Beijing parties.

Although district councils form the lowest political tier (responsible for neighborhood issues like garbage collection and public transport), elections to them are fully democratic — unlike legislative elections, which determine only half the seats in Hong Kong’s lawmaking body, and unlike the vote for the territory’s leader, which is restricted to a college of just 1,200 electors. That gives the district council elections a broad political significance, especially against the background of months of unrest.

“It reflects a clear-cut repudiation of [Chief Executive] Carrie Lam’s administration,” Willy Lam, an adjunct professor at the Chinese University of Hong Kong’s Center for China Studies, tells TIME. “I think it’s quite possible that the results [will spur Beijing to] speed up the replacement of Carrie Lam, because she has no credibility.”

Hong Kong protesters have issued five demands to the government, only one of which — the withdrawal of the extradition bill that sparked the protest movement — has been granted. Professor Lam says the election results may embolden protesters to call for their other demands to be met. These include the exoneration of the thousands of protesters arrested to date, as well as Lam’s ouster. (Beijing has remained steadfast in its support for Lam, despite reports that there are plans to remove her.)

“They expect some concessions of Beijing, but Beijing is not ready to make those concessions,” he says.

Read More: Hong Kong Protestors Built a ‘Fully Functioning City’ Inside a Besieged University. Here’s What It Looked Like

In a statement issued on Monday, the chief executive acknowledged that the results could be attributed to “dissatisfaction with the current situation and the deep-seated problems in society.”

“The [Hong Kong] government will listen to the opinions of members of the public humbly and seriously reflect,” she said in the statement.

Some pro-Beijing politicians blamed the unrest for their defeat. “Our campaign process was seriously disrupted, our offices and campaign materials destroyed,” said Starry Lee, chairperson the enclave’s largest pro-Beijing party, at a press conference.

While protesters are hailing the election as a victory for their movement, experts caution that it doesn’t necessarily indicate public approval for the increasingly violent measures protesters have adopted since the death of a young demonstrator on Nov. 8.

In the last two weeks, bankers and lawyers have faced off against riot police during lunchtime protests in the financial district, and students barricaded themselves inside two campuses, battling police with an array of almost medieval weapons — bows and arrows, slingshots and Molotov cocktails. Protesters have also set a man on fire and killed an elderly bystander, who was hit on the head by a brick during a street battle with police.

“The protesters get a moral victory ,” Professor Lam says. “They now think they have the mandate of the Hong Kong people.” But, he added, “At this stage it doesn’t necessarily mean that voters support the radicals.”

Other analysts say that the democratic camp — which, as result of their sweeping victory, may get to determine 117 of the 1,200 electors responsible for selecting the city’s next chief executive — has a big challenge in front of them.

“This confers a huge political responsibility to them, they may not be able to fulfill those obligations one hundred percent,” Cheung Chor-yung, a senior teaching fellow at City University’s Department of Public Policy, tells TIME. “Many of the candidates have no political experience whatsoever, it’ll be a steep learning curve.”

And even if the new district councilors can surmount their lack of experience, he says, it doesn’t mean that they will be able to end of the city’s worst political crisis in decades.

“It’s a leaderless campaign,” Cheung points out. “You can’t identify the political leadership, so how can they work with the mainstream democratic parties?” 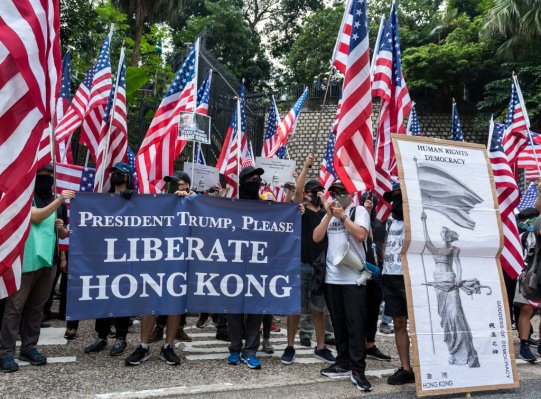 What to Know About the U.S. Legislation on Hong Kong
Next Up: Editor's Pick