The PlayStation 4 has dominated the video game market since its release six years ago. Sure, Microsoft’s Xbox One is more powerful than the PlayStation 4, but Sony’s console spent this generation producing incredible games. Putting software above hardware has been a winning strategy for Sony and it’s sold more than 100 million consoles since the PlayStation 4’s release in 2013.

With more than 2,300 games for the system, it can be hard to pick which game to play. There’s nothing worse than getting five hours into a game and realizing it isn’t for you. But TIME has you covered.

Here’s our list of the 10 best PlayStation 4 games you can play right now.

Call of Duty: Modern Warfare is the best first-person shooter available on the PlayStation 4, period. Its single-player campaign is one of the best in the franchise’s 17-year run, but the multiplayer is the real draw and joy of Call of Duty. Warzone, Call of Duty’s take on Fortnite’s Battle Royale gameplay mode, is a chaotic delight. Squads of up to four drop into a 150 player free-for-all and compete for dominance. The longer the game runs, the more gear players gather, but the smaller the arena gets and the wilder the fights become.

Resident Evil has managed to make killing zombies fun for more than two decades. Developer Capcom’s update of the second and third game in its long-running franchise is more than just a graphical overhaul — it rebuilt both games from the ground up. If you like a slower paced, horror-driven experience with lots of puzzles then grab Resident Evil 2. If you prefer action over horror, then pick up Resident Evil 3. Either way, you won’t be disappointed.

Final Fantasy 7 Remake is so good it doesn’t feel like it should exist. Developer SquareEnix took one of the most iconic video games of all time, updated its graphics, overhauled the combat system, and made it a welcoming experience for old fans and new aspirants alike. It’s a Japanese-style role-playing game with fast-paced real-time combat and a story about environmental activists fighting against an evil corporation that’s killing the planet. There’s high drama, ghosts, magic, swords, guns, and a fat yellow bird called a chocobo you can summon to squash your enemies.

If you’re a fan of Marvel, Spider-Man or super heroes in general, Marvel’s Spider-Man is a must play. Open world games can feel like list of chores, but swinging around Manhattan as the web-head is so much fun that Marvel’s Spider-Man never wears out its welcome. Peter Parker’s personality shines through as he works his way through his rogue’s gallery—fighting everyone from Vulture to King Pin.

God of War is such a rare gem and an example of how to update both the gameplay and story of a popular franchise for the modern era. Spartan Kratos tore across the Greek pantheon, murdering gods and monsters alike in PS2 and PS3 games. He was violent and crude. The recent reboot displays a calmer, more considered Kratos who regrets his past and wants to teach his son to be better. The frantic, button mashing action of the originals has also been updated and God of War is a slower-paced action adventure game where the player explores the lands of Norse Myth unlocking new abilities and solving puzzles.

Bloodborne is the best action game on the PlayStation 4. Other games are good, but none reach the heights of Bloodborne. Players navigate an intricately designed Lovecraftian nightmare as they hack and slash through monsters and men in search of answers to the secrets of the dying city of Yharnam. This game is tough, but fair, and beating a boss you’ve spent hours losing to is one of the best feelings in gaming.

Open world games are so popular that their design has become stale.

Horizon Zero Dawn proves that the right story and the right gameplay tweaks can make something as dull as climbing a tower to unlock parts of the map thrilling again. Set in a post-apocalyptic future over run by animalist machines, Horizon: Zero Dawn tells the story of Alloy a young woman who leaves her tribe to learn about her past and its connection to the monstrous machines that stalk the planet.

Death Stranding isn’t like any other video game out there. As Sam Porter Bridges, played by Norman Reedus, the player must deliver packages to reconnect America. Death Stranding focuses on travel, eschews combat and forces the player to ask hard questions about the nature of America and how technology both connects and disconnects us.

The Witcher 3: The Wild Hunt

The Witcher 3: the Wild Hunt is the best RPG available on any platform. Players control Geralt of Rivia, a monster hunter, as he navigates the a war zone in search of his adopted daughter. Many RPGs claim to offer player’s choices that lead to consequences, but few deliver on that promise like The Witcher 3. An early quest involving a local lord named the Bloody Baron is as riveting, well written and tragic as any early episode of Game of Thrones. The Witcher 3 wouldn’t make this list if it’s gameplay weren’t also incredible. This is an action RPG that requires tactical thinking and preparation to survive. Geralt has to use the right potions and the right equipment for every fight. The more research and quests the player does ahead of each encounter, the better prepared they’ll be.

The Last of Us

This is a bit of a cheat because developer Naughty Dog originally released The Last of Us on the PlayStation 3 a few months before the PlayStation 4 hit the market. But the remastered version for the newer console is a beautiful upgrade to the game. Telling the story of Joel and Ellie—survivors of a fungal-borne zombie apocalypse—thrown together by fate, The Last of Us is one of gaming’s most gut-wrenching stories. Get caught up on the story before The Last of Us Part II drops in 2020.

Buy now: The Last of Us 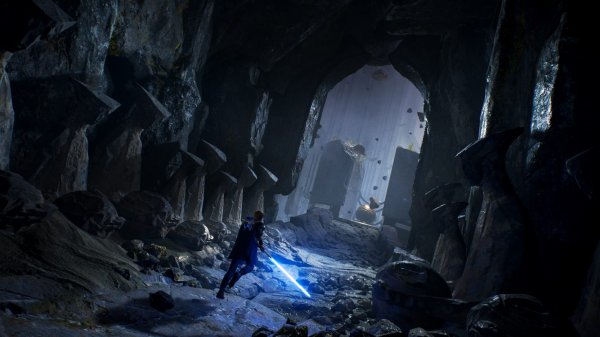 How Respawn Made the Best ‘Star Wars’ Game in a Decade
Next Up: Editor's Pick