Death Stranding Is the Weirdest Game I've Ever Played, and I Loved Every Minute

Towards the end of the game, I was running medical supplies from one city to another. I had a truck, which made things easier, but the terrain was rocky. I tried to drive the truck down a cliff and over a river, but I miscalculated and got stuck on some rocks. I hauled myself out of the driver’s seat, sighed, and unloaded the cargo, strapping it to my back.

It was storming, not just a light rain, but a maelstrom that reduced visibility to just a few feet ahead of me. And in Death Stranding, the rain ages everything it touches. Every moment I spent outside the truck degraded the medical supplies, and I had miles to go yet. I trudged across the river, and could just barely make out my destination when the ghosts came — Beached Things, BTs, the dead. My Bridge Baby screamed a warning, but the rain had made it hard to see. It was too late. The ghosts found me, ripping the packages from my back and flinging my body across the map.

I raised up, the pristine grassy landscape of America replaced by crude bubbling tar. Dilapidated buildings and ruined vehicles frothed on the surface of the black pool, relics from America’s past floating on a sea of decayed matter. The tar coalesced in the distance and formed a whale that swam towards me. The tar whale screeched and eldritch tentacles burst from its face, forming a maw designed to drag me into the world of the dead. I filled a grenade with my blood, climbed to the top of a ruined building as it bubbled on the surface of the tar pool, and prayed the medical supplies would survive the encounter.

Death Stranding hits the PlayStation 4 on November 8 and arrives on PC next year. The camera hovers in a third-person, over-the-shoulder view. There’s action, but it’s not an action game. There’s ghosts, but it’s not a horror game. The story takes place in the future, but it’s not a science fiction game. It’s a game about delivering packages and building connections — what its creator, video game auteur Hideo Kojima, calls a “strand” game.

Death Stranding’s core gameplay involves walking from point A to point B delivering packages. Sometimes your parcels are as serious as medical supplies, but other times they’re as innocuous as movies and magazines.

But it gets so much weirder than that.

In Death Stranding, death itself is broken, and the barrier between the living and the dead is rendered permeable. Timefall, the water that ages everything it touches, has replaced rain. When a person dies, if they’re not cremated within 24 hours, their body explodes like a nuclear bomb. In this future, America is over. People live in isolation, afraid to group up in cities. The countryside is populated by people living in bunkers, unforgiving terrain, ghosts, and marauders.

Enter Sam Porter Bridges, played by Norman Reedus. Sam is a courier, and his adopted mother also happens to be the President of what’s left of the United States. On her deathbed, she gives Sam a mission: reconnect America. The U.S. has developed a new technology, a form of instant communication called the Chiral Network. Sam’s job is to move from the East Coast to the West Coast, connecting America’s cities and settlements to the Chiral Network. Along the way, he’ll help people get the supplies they need and rescue his estranged sister, who’s been kidnapped by terrorists.

The bulk of Death Stranding is about walking between these different human settlements. Thanks to the Timefall, America’s infrastructure is gone. So I had to make my own paths up mountains, across rivers, and around gorges. To traverse these dangers, I used ladders and ropes, built bridges and even reconstructed portions of America’s highway system.

Part of the magic of Death Stranding is that you aren’t rebuilding America by yourself. As I journeyed, I saw the ladders, ropes, and other assorted improvements other players had laid down. When I built a bridge across a chasm, other players in other games could see that bridge. If they felt the bridge helped them, they could “like” it, which made it more visible to more players.

Death Stranding is epic, weird, and not like anything I’ve ever played before. The story is a core draw here — Bridges’ journey across America posits big questions about technology’s role in American life, about the isolation created by the internet, and our culture’s dysfunctional relationship with death. It doesn’t always answer those questions, and sometimes it answers them poorly. But there’s no other big-budget video game on the market today doing anything as innovative or as strange as Death Stranding.

I loved Death Stranding, and think lots of other people will too. But just as many will hate it. It’s odd, contains cutscenes that run upwards of an hour, and long stretches of the gameplay are peaceful and meditative. Its action beats are rare, but intense. It plays with big ideas about America and death, but doesn’t quite deliver on all its narrative promises.

And yet Death Stranding is also a game where Mads Mikkelsen pursued me relentlessly through the afterlife, where one of its principal villains seems to know that they’re in a video game, where directors Guillermo Del Toro and Nicolas Winding Refn make up the supporting cast, and a stillborn baby in a jar is both a piece of equipment that lets you avoid ghosts and the emotional core of the story. I’ve never played anything like Death Stranding, and I doubt I ever will again. That alone is worth the $60 price tag. 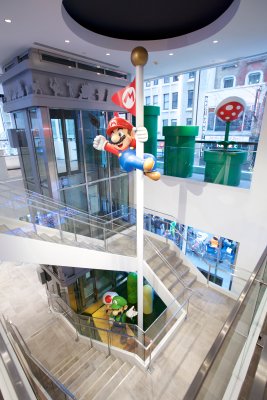 Shuntaro Furukawa Is Ready to Take Nintendo to the Next Level
Next Up: Editor's Pick