The neon lights of Wall Market fill the air with color. It’s night, and especially dark because a steel plate blocks out the sky. This is Midgar, the most powerful city in the most powerful nation on the planet. The rich live up on the plates, living a life powered by a miraculous energy source. The poor live down below, never seeing the sky and experiencing “daylight” only as powerful sun lamps.

I’m in Wall Market to rescue a friend, but first I need allies. To earn favor with people who can help, I first have to prove myself in the arena. Armed with an impossibly large sword and fighting alongside a talented spellcaster, we cleave through the best Wall Market has to offer. During the last fight, we face off against a house — literally, a living house with magical powers that launches flaming chairs like rockets.

Final Fantasy VII Remake, available April 10 for the PlayStation 4, should not exist. It’s a weird, beautiful, and challenging recreation of one of the most iconic titles in video game history. Remaking Final Fantasy VII is like remaking Casablanca. It’s a video game so beloved that remaking it is a work of hubris, bound only to disappoint diehard fans in an effort to draw in new players.

Somehow, developer SquareEnix has pulled off the impossible.

Final Fantasy VII Remake is a Japanese-style role-playing game. Players take control of mercenary Cloud Strife as he navigates the streets of Midgar while taking jobs for an eco-terrorist organization called Avalanche. Arms manufacturer Shinra runs Midgar and, according to Avalanche, is using a power source that’s wrecking the planet. The plot gets even more complicated and strange from there, but I won’t spoil it for you. Suffice to say that Final Fantasy VII Remake is about revolutionary eco-terrorists fighting a giant corporation that controls everything and is poisoning the planet. Its story and themes resonate even more today than they did in 1997, when the original game hit the PlayStation.

While the story is intriguing enough on its own, it’s the combat system that kept me engaged over the 40-plus hours I spent playing Final Fantasy VII Remake. Players control up to three characters as they dodge and block enemy attacks. Dealing and taking damage builds an Active Time Battle (ATB) meter, which awards points that players spend to activate spells and abilities. Each enemy has unique strengths and weaknesses. One might be weak to lightning magic, while another takes extra damage when attacked from behind. Characters navigate the battle space differently, too: gun-armed Barret can hit enemies at a distance, but he moves slowly. Tifa uses her fists to pummel enemies, builds her ATB meter faster than others, and clears distances fast. Materia, orbs of immense power, grant the ability to cast spells. Any character can equip any piece of materia, so it’s possible to make a melee character like Tifa into a caster. Each character also has unique abilities tied to their equipment, which come with their own tech trees. The joy of combat comes from customizing your party and reacting to threats. I never settled on an ultimate combination of materia, characters, and equipment. I constantly changed them depending on the circumstances of each encounter.

One of the joys of Final Fantasy VII Remake is how inviting it is for players new to the franchise. Each Final Fantasy game tells a self-contained story. While VII, one of the franchise’s most popular titles, generated three spinoff games, two movies and plenty of other assorted media, you need not have consumed any of that material to fall in love with this game. If you’ve never even heard of Final Fantasy before, you can jump into this remake and have a great time. Hell, it might even be better, because you’d be unburdened by years of expectations and lore.

The ending of Final Fantasy VII Remake will be controversial. It’ll upset some fans, confuse others, and delight a few. I can’t say much without spoiling it, but I can tell you that it will be hotly debated. Fans and critics will write op-eds and explainers. Those with no memory of the original will probably come away with better reactions.

The first in a trilogy, the original Final Fantasy VII was an epic tale that only started in Midgar before branching out and opening up to a wild and danger-filled open world. Final Fantasy VII Remake is only part of the story — but it’s a great start. 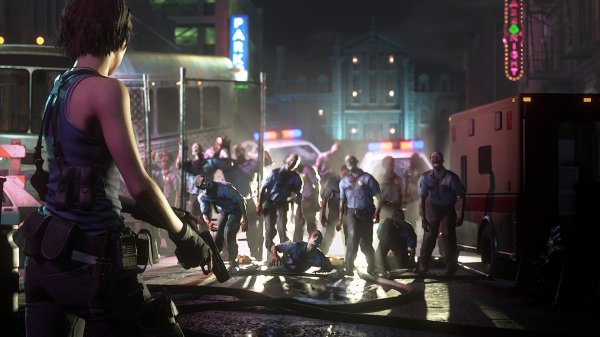 The Resident Evil 3: Nemesis Remake Takes a Shot at Resurrecting the Franchise's Weakest Game
Next Up: Editor's Pick