People Are Certainly Worked Up, if Not Worked Out, Thanks to This Peloton Commercial

If you happened to be watching even a little bit of cable television over Thanksgiving weekend, this Peloton commercial has likely already been haunting your dreams. If you stuck to Netflix — The Irishman is more than three hours long, after all — though, then limber up, because this is an exercise moment and it’s about to get weird.

In a now-viral video for the stationary bike and virtual fitness program, a man surprises his wife with a Peloton bike for Christmas. “A Peloton!” she gasps, over-acting in the style of a woman well-versed in nonsensical presents.

The woman then proceeds to document her exercise journey with the bike (of course, she is not technically traveling anywhere but that is literally the least thing to quibble over at this point in the ad) over the next year in a series of increasingly uncomfortable vlogs. At one point the instructor in a workout class she is streaming live from the bike gives her a shout-out, and she is seemingly brought close to tears.

“I didn’t realize how much this would change me. Thank you,” she says, as she and her husband sit down to, wait for it, review the video compilation on TV at the end of the year? Why are they doing this? (Why was the bike moved into what appears to be a storage closet at one point in her year? Is that a cry for help?)

The commercial may have rattled shareholders, too. Peloton stock dropped 10 percent Tuesday amid the backlash, according to Bloomberg.

Representatives for the brand did not immediately return TIME’s request for comment, but told CNBC in a statement on Wednesday that it was standing behind the commercial. “Our holiday spot was created to celebrate that fitness and wellness journey. While we’re disappointed in how some have misinterpreted this commercial, we are encouraged by — and grateful for — the outpouring of support we’ve received from those who understand what we were trying to communicate,” the statement said.

The advertisement is part of the brand’s marketing efforts to cast itself as a joyful, life-changing line of wellness products. Heads turned when in its initial public offering (IPO) filing in August, CEO John Foley wrote that “on the most basic level, Peloton sells happiness.”

But viewers were more inspired to dole out burns than to burn calories. While comments on Peloton’s official YouTube video have been blocked, Twitter reactions say it all:

Some people even made their own parody contributions to give the brand some new ideas. Comedian Eva Victor, whose satirical Twitter videos have often gone viral, tells TIME that she found the commercial to be absolutely “bonkers,” and clearly ripe for parody.

“I think the ad is unsatisfying and unsettling,” she says, “and it’s cool to see a version that speaks to why the ad was insane.”

Victor also pointed out that there’s no indication from the commercial that this woman wanted the Peloton at all. “Literally all they needed to do to get us on the side of the commercial was have her say, ‘I’ve been asking for this all year,'” she says.

But others felt the commercial was beautiful in its own right. Case in point:

Incidentally, the ad’s soundtrack is Tal Bachman’s “She’s So High.” 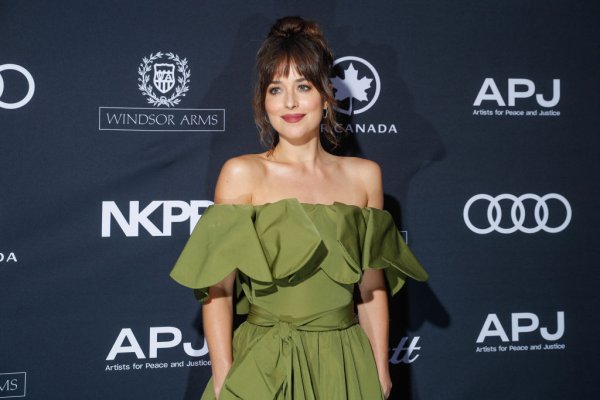 Here's Why Dakota Johnson's Appearance on The Ellen Show Set the Internet on Fire
Next Up: Editor's Pick