President Donald Trump and French President Emanuel Macron held a tense meeting on the first day of the NATO summit in London, after exchanging harsh words about each other earlier in the press. The pair spoke about trade, immigration, combating terrorism, NATO, and the U.S.’s relationship with Turkey; all topics on which the two leaders disagree to an extent.

Earlier Tuesday morning, Trump had responded to Macron’s criticism in The Economist of the U.S.’s decision to withdraw troops from Syria without consulting NATO allies, a move Macron said was an example of the alliance “experiencing the brain death of NATO.”

“I think that’s very insulting,” the U.S. President had told reporters. “Nobody needs NATO more than France. And frankly, the one that benefits really the least is the United States… We’re helping Europe,” he continued. “I think when France makes a statement like they made about NATO, it’s a very dangerous statement to make.”

Sitting with Trump, Macron addressed his comments. “My statement created some reactions,” he said. “I do stand by it.”

The two went on to speak about Syria, in the meeting held before reporters. When asked if France had committed to take back detained ISIS fighters still in the region, Trump joked to Macron, “Would you like some nice ISIS fighters?”

“Let’s be serious,” Macron cooly responded, adding that there needs to be a larger push to defeat ISIS overall.

“This is why he’s a great politician, because that’s one of the greatest non-answers I’ve ever heard,” Trump responded.

Macron also brought up the issue of Syria earlier in the meeting. “When I look at Turkey, they are fighting against those who fight with us, shoulder to shoulder, against ISIS,” Macron said, turning to Trump. Trump decided to withdraw troops from the region after speaking with Turkish President Recep Tayyip Erdogan over the phone. President Erdogan subsequently launched an attack on Syrian Kurds following the U.S.’s withdrawal from the region, which some have argued constitutes ethnic cleansing. Syrian Kurds were key allies in the U.S.’s fight to defeat ISIS.

Macron also demanded “clarifications from the Turkish side” on its purchase of Russian-made air defense missile systems. “How is possible to be a member of the alliance … and to buy the S-400s from the Russians?” Macron asked.

Earlier that day, President Trump answered questions from reporters for nearly an hour. On top of Macron’s comments, the House of Representative’s impeachment inquiry, the trade war with China and the upcoming British election all came up.

The two-day summit is meant to mark the 70th anniversary of the geopolitical military alliance, and leaders from 29 countries will be attendance. Pressing foreign policy issues like North Korea’s nuclear program, Turkey’s assault on the Syrian Kurds and the rise of China will all likely come up. The assembling of global leaders also comes just nine days before the United Kingdom’s general election, which will determine whether U.K. Prime Minister Boris Johnson remains in power.

What Did Trump say about Macron before their meeting?

In a Nov. 7 interview with The Economist, President Macron criticized the decades-old alliance — arguing the it was “experiencing the brain death of NATO” — and criticized President Trump’s decision to abruptly withdraw troops from Northeastern Syria without telling his NATO allies. NATO countries including France, the U.K., and Germany all still have troops in the region.

He added that the U.S. is “turning its back on us.” Trump recently moved to cut a large part of its contribution to NATO’s collective budget, moving it from 22% of the budget to 16% of the budget, per CNN.

Macron warned other European countries that they can no longer depend on the U.S. to defend its allies, and said Europe needs to rethink its geopolitical strategy. “You have no co-ordination whatsoever of strategic decision-making between the United States and its NATO allies. None,” Macron said in the interview.

“President Macron said that NATO is brain dead. I think that’s very insulting,” the President told reporters. He added it was a “very, very nasty statement” towards the world leaders at the summit. “Nobody needs NATO more than France. And frankly, the one that benefits really the least is the United States… We’re helping Europe,” he continued. “I think when France makes a statement like they made about NATO, it’s a very dangerous statement to make.”

Speaking with Trump on Tuesday Macron reaffirmed his comments to The Economist, saying “I do stand by it.”

The U.S. President is himself a longtime critic of NATO, having called it “obsolete” and campaigning on the promise to member countries “you gotta start paying your bills.”

The U.S. and France have also recently sparred over trade. France’s new digital services tax will affect U.S. tech companies like Google, Facebook and Apple, and in response the U.S. has said it might impose punitive duties on up to 100% of French imports of Cheese and Champagne, among other goods.

Macron and Trump once had a less adversarial relationship; Macron famously brought Trump to Bastille Day, a trip that went so well some described their friendship as a “bromance.” Those honeymoon days seem to be over.

What did Trump say about impeachment?

On Wednesday, the House Judiciary Committee will hold its first public hearing of the ongoing impeachment inquiry into the President. Experts will speak about the legality of impeaching the President for pressuring Ukraine to investigate his political rivals, former Vice President and current 2020 presidential contender Joe Biden and his son Hunter. The White House declined the Committee’s invitation to take part in the hearing. The Judiciary Committee is tasked with deciding if the evidence against Trump warrants a formal House vote on his impeachment.

““I think it’s very unpatriotic of the Democrats,” Trump said, when asked about the inquiry. “I think it’s a very bad thing for our country.” Trump repeated that he “did nothing wrong” and called the Democrats “crazy.”

Democrats on the House Intelligence Committee are scheduled to release a report on Tuesday on their findings from the inquiry so far. The Republicans on the Committee will release a rebuttal.

What did Trump say about the U.K.?

The summit begins just nine days before the U.K.’s general election on Dec. 12, which comes after months of political deadlock over the U.K.’s repeated failed attempts to reach a deal to exit the European Union.

Although he said he’s a “fan of Brexit,” Trump said “I’ll stay out of the election. He added that he thinks “Boris is very capable and he will do a good job,” but said he could “work with anybody.”

Trump schedule doesn’t currently include a one-on-one meeting with the British Prime Minister, despite the precent of the U.S. President usually meeting with the leader of the summit’s host country. However, Trump will meet with Johnson Tuesday night at meeting that includes several leaders, before heading to a meeting with Queen Elizabeth II and Prince Charles.

What did Trump say about China?

The President also spoke on his ongoing trade war with China, and suggested he might delay plans to reach a deal. “The China trade deal is dependent on one thing: do I want to make it,” he said, adding that he has “no deadline.”

“In some ways I think it’s be better to wait until after the election [with China], you want to know the truth,” he continued.

The rise of China as a geopolitical force will likely come up again at the summit. 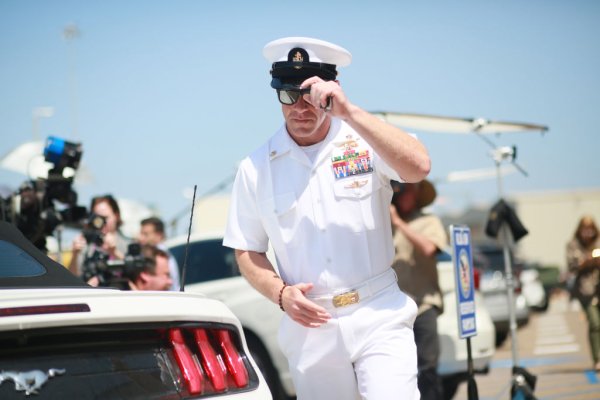 Trump's Impact on Navy SEAL Reforms
Next Up: Editor's Pick