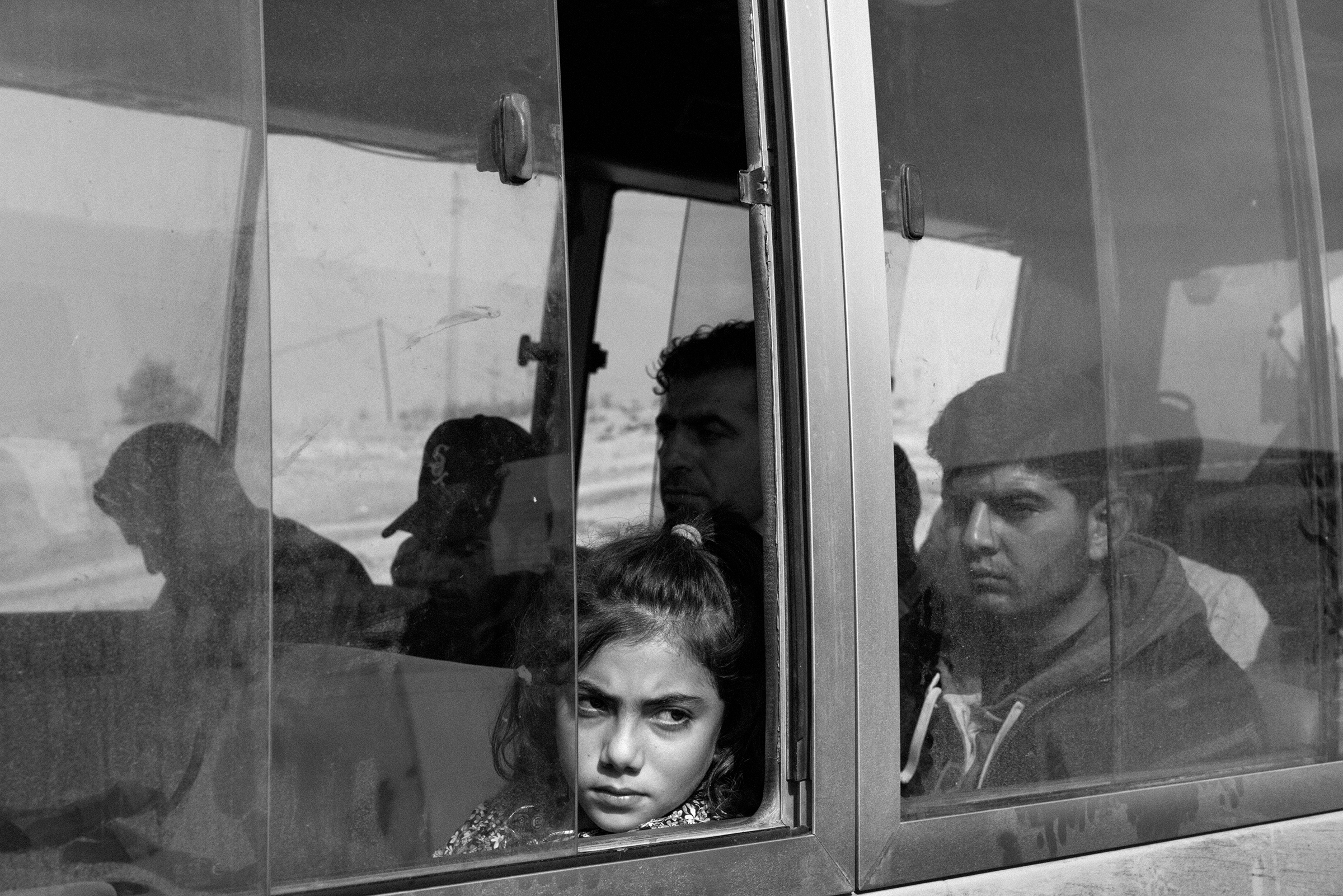 Nuhat Abdul Hamid, 9, from the Syrian Kurdish town of Darbasiyah, aboard a bus transporting refugees to the Bardarash camp in Iraq on Nov. 1.
Moises Saman—Magnum Photos for TIME

'No Friends But the Mountains.' What Life Looks Like for the Kurds of Syria, Now That the U.S. Has Pulled Back

By Karl Vick | Photographs by Moises Saman—Magnum Photos for TIME

The modern Middle East was formed exactly 100 years ago when, in the wake of World War I, the victors began creating new countries. Among the populations deemed deserving of nationhood — along with Armenians and Azeris — were the Kurds. The Kurds had lived for centuries in the mountains and high plains where Mesopotamia becomes Anatolia and, with their own language, culture and identity, met the criteria for a nation of their own.

Instead, the Kurds ended up within the borders of five other nations, a tapestry cut by a jigsaw. What photographer Moises Saman documents is that division playing out in three of the countries: Kurds in Iraq are giving refuge to Kurds from Syria, who have come under attack by the army of Turkey, the nation with the largest Kurdish minority of all. (The Kurds in Iran and in Armenia are uninvolved in the current conflict, except by viewing the Kurdish satellite channels that unite the roughly 24 million Kurds in the region, plus 1.5 million living in Europe.)

On Oct. 6, President Trump spoke on the phone with the President of Turkey, then abruptly ordered U.S. forces to abandon their positions protecting Syria’s Kurds, who had been essential allies in the common fight against ISIS.

Turkish troops then began shelling Kurdish towns in Syria, and Turkish forces pushed forward, irregulars executing people in ditches along the road. Perhaps 160,000 civilians fled the advance, most going deeper into Syria. Some 15,000 Kurds have so far made their way east to Iraq.

There, some found themselves in a desolate refugee camp that already contained Kurds from Syria who had fled the country when Syria’s civil war began, back in 2012. The two groups would serve as bookends in the Syrian conflict, if anyone thought it was over.

Instead, the U.S. pullback marked the start of an especially convoluted new phase, in which foreign powers — Russia and Turkey, which rushed into the void left by the U.S. — patrol highways also frequented by a rump U.S. force, and occasionally even by the Damascus government. Among the Kurds, the situation is scarcely simpler.

Hamza Mohammad Hamo, 29, with his daughter, Gulista, at the Bardarash camp. A former Syrian Kurdish fighter from Kobani, he arrived with his three-year-old after his wife left to join the fight against the Turkish invasion.
Moises Saman—Magnum Photos for TIME

Syrians arriving at the Iraqi border approach after dark, hailing Iraqi Kurdish sentries from the darkness without drawing the attention of the Syrian Kurdish forces, who would prefer they remain in Syria. As many as 250 arrive in a night. After registering — their names checked against a list maintained by Kurdish security agencies — they are given a blanket.

In the morning, they board a bus for the 60- or 70-km journey to a camp across a landscape stippled with reminders of what seems to be nearly incessant conflict. Graveyards hold only some of the at least 60,000 Kurds killed by Saddam Hussein’s forces in the late 1980s. Broken concrete marks the remains of homes destroyed in waves of battles against ISIS, which the Kurds of both Iraq and Syria fought to the death.

With the help of U.S. air cover, Kurdish militias in Iraq halted, then led the way in defeating the well-armed, fanatical extremists in 2014 and again in 2016.

In Syria, Kurdish fighters were the essential U.S. ally, pushing far beyond their own area to eradicate the caliphate that had been so key to ISIS recruitment. The Syrian Kurds’ battle deaths are estimated to have totaled 11,000.

Trump’s betrayal of that sacrifice fits snugly into the narrative of great-power double-dealing that the Kurds have told since 1923, when the treaty that gave them a country (dubbed Kurdistan) was overtaken by the treaty that erased it.

“The Kurds have no friends but the mountains,” the saying goes. And yet they press on.

Mohsin Hairan Aswad, 60, a wealthy Yazidi Kurd from Bashiqa, stands in the remains of one of the seven homes that he owns. His homes were destroyed during the fighting to liberate the town from ISIS control in 2016. The next year, his son Faris, a local policeman in Mosul, was killed by an ISIS sniper.
Moises Saman—Magnum Photos for TIME

In Iraq, the territory the Kurds took from ISIS they then claimed as an extension of their own — only to be forced off most of it in 2017 by the government in Baghdad. In Syria, Kurdish officials continued to play a crucial part in eliminating Abu Bakr al-Baghdadi, maintaining a covert agent near the ISIS leader despite Trump’s betrayal.

But in the territory the Kurds were forced from, they are patrolling with the Russians as well as with the remaining Americans, hedging their bets.