The French, who pioneered classical ballet, are familiar with the pas de deux, the intricate dance where two people circle and entwine each other center stage. This weekend it will be President Donald Trump and French President Emmanuel Macron lacing up their slippers, as the U.S. President returns to France for global celebrations marking the centenary of the end of the First World War.

For the French leader, the next few days offer an opportunity to reinvigorate a declining presidency. His popularity has plummeted in French opinion polls over the past few months, thanks in part to rising far-right nationalism across Europe, where fierce campaigning is underway for European Parliament elections next May.

So Macron has seized on the commemoration—in which 60 world leaders will attend three days of summitry, wreath-laying and speeches—as a moment to drum home his pivotal message: That globalism is the only safeguard for peace, while the nationalism espoused by Trump, and increasingly European Union leaders who seem to emulate him, will lead to disaster as it did a century ago.

He will seek to cast himself as the world’s flagbearer for the global deals on climate, trade, and security, at a time when Trump has pulled the U.S. out of most of those, and as Macron’s crucial partner, German Chancellor Angela Merkel, is now a lame-duck leader.

All week, Macron has toured giant cemeteries from the calamitous 1914-1918 war, which devastated entire parts of France, and killed about 10 million people, including more than half of all French soldiers who were sent to fight.

Visibly moved by the scale of the carnage, Macron stood in the war cemetery of Verdun in Northern France on Tuesday, and bluntly told Europeans in a radio interview that the peacetime they take for granted is “precarious,” and might just be a “parenthesis” in the Continent’s blood-soaked history.

“Nationalism is rising, it advocates the closing of borders,” he said. He added that today’s fraught political battles bore a “resemblance” to the 1930s, which led to Nazism and the Second World War, killing millions. The First World War, he said, “teaches us the absurdity of conflict, bellicose nationalism.”

Macron was addressing Europeans, of course. But he might just have been aiming his words at Trump, the world’s most powerful nationalist leader of all. In recent months, the two have wrangled openly over bitterly divisive issues, among them Trump’s decision to pull the U.S. out of the Paris Agreement on climate change; to withdraw from the Iran nuclear deal, which the E.U. and U.S. had painstakingly negotiated; and to move the U.S. Embassy from Tel Aviv to Jerusalem. All were decisions Macron pleaded in vain with Trump not to do, effectively highlighting the French president’s lesser power in the relationship.

The White House downplayed the idea of tensions between the pair of leaders. “I think they have an excellent personal relationship,” National Security Advisor John Bolton told a group of journalists in Paris on Friday. “There have been disagreements on substantive policy issues, for sure. But I think that is because both leaders pursue what they think is their best national interests.”

But the image of the U.S. President in France, and indeed much of Europe, has been of a disrespecting bully. Key moments on TV, like Trump apparently flicking dandruff off Macron’s shoulder during a White House meeting last April, have stuck in many minds.

“The image among the majority is very bad,” says Jérôme Fourquet, director of public opinion at the polling agency Ifop in Paris. He believes the U.S. reputation in Europe is at its lowest since the U.S. invasion of Iraq in 2003, which France refused to join. “Even among French who pay no attention to the U.S., Trump is seen as a warmongerer,” Fourquet says. “He’s regarded as dangerous and not very psychologically stable.”

That, at least, is the perception for most French—but not all. Crucially, Trump has strong fans among the nationalists who abhor Macron, and who are now sharpening their knives for the European election campaign, sensing that they have the political support from a much more powerful leader than the ones in their own countries.

“The new cleavage is no longer left against right,” France’s far-right leader Marine Le Pen told TIME in an interview in October, in her office at the National Assembly, to which she is an elected member. “All of that is gone. It is now nationalists against globalists.” Macron, she said, “is defending a dying world.”

That schism between nationalism and globalism will underline many of the discussions this weekend—as leaders mark the catastrophic rift nationalism caused in the First World War.

Trump is scheduled to meet Macron on Saturday morning at the Elysée Palace, and after a day of solemn tributes he and Melania Trump will join world leaders and their partners at Paris’s ornate D’Orsay Museum for dinner on Saturday night.

Macron will host Sunday lunch at the Elysée with all the leaders; among those arriving are Israeli Prime Minister Benjamin Netanyahu, Turkish President Recep Tayyip Erdogan, Canadian Prime Minister Justin Trudeau, the U.N. Secretary General António Guterres, and dozen of others.

On the surface the leaders might seem united in solemnity. But underneath, that sense of common purpose is deeply frayed. That much will be clear by Sunday afternoon, when Trump visits the U.S. war cemetery at Suresnes West of Paris, burial site for 1,541 Americans killed in the war, before flying back to Washington.

Tellingly, Trump will make that visit alone. At that time, Macron, Merkel and Guterres will officially open a three-day conference called the Paris Peace Forum, in which politicians, corporate executives, and government officials will debate issues ranging from terrorism to economic growth.

Meanwhile, thousands are expected to demonstrate against the U.S. President in Paris’s Place de la République on Sunday afternoon, with organizers saying they will protest what they see as Macron’s too-polite relationship with Trump. “Macron is pretty much bowing to him,” says Bénédicte Gambirasio, one of the organizers. “We know there are commercial contracts at stake, but we would love for him to be firmer.”

Like many pas de deux, finding the delicate balance is exceptionally difficult. “Macron has to avoid falling into a trap,” Fourquet says. “He has to keep a good distance from Trump. Yet this is the 100th anniversary of the First World War, a time when we should be very close to the U.S.,” he says. “The problem is, this is not a relationship of equals.” 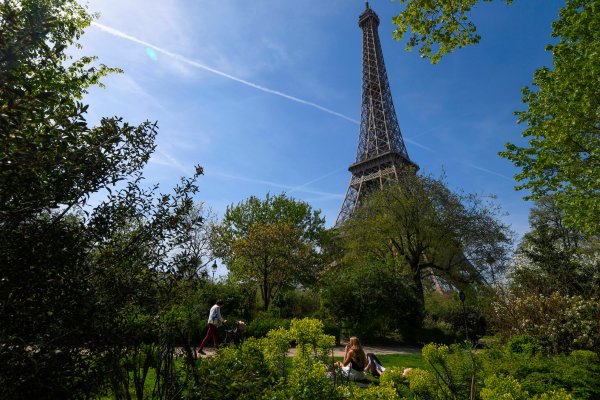 How Green Is Your City? In Paris, the Answer Is Not Enough
Next Up: Editor's Pick