Participants of the Fridays for Future movement demonstrate at the Global Climate Action Day on Simsonplatz.
dpa/picture alliance via Getty I—(c) dpa-Zentralbild
By Madeleine Carlisle

For years, Black Friday has been sold as a holiday day for the consumer. In the 2018, Black Friday resulted in $6.22 billion in online sales alone, per CNBC. This year, climate activists wants people to stop and reconsider such rampant consumption.

Climate protests are taking place around the world this Black Friday to raise awareness about the dangers of climate change. The protests are also timed to demand action during the U.N. climate negotiations, COP25, which will begin in Madrid, Spain on Dec. 2.

Climate activists say more than 80 strikes are happening in the U.S. alone. Protests have already happened in Asia and Europe. In Germany alone, activists say 630,000 turned out.

According to organizers, protesters plan to disrupt large shopping centers in Chicago and hold a march and a rally in Los Angeles called “Don’t Shop. Strike!” According to Reuters, organizers expect strikes to take place in 2,300 cities in 152 countries around the world.

“We are striking because our leaders haven’t been listening to us. They think our voices are ones they can ignore and not take seriously,” 16-year-old American climate activist Maya Arengo said in a statement. “They don’t understand that we, the youth, are terrified for our futures and we won’t stop fighting until our futures are secure.”

In September, Thunberg and other activists led a global climate strike, which drew millions of people around the world to protest and demand action to fight the coming climate catastrophe. Those same organizers have planned protests around the world on Black Friday, hoping to raise awareness of the days ecological impact and demand climate action from COP25 in Spain next week.

Ice Cream company Ben & Jerry’s, whose owners are known for progressive politics, tweeted out a map of strikes in the U.S.

Reuters reports that thousands of people in Asia and Europe have already taken part in the protests.

According to social media, protests took place across the U.K., including in London, Belfast, Bristol Brighton and Plymouth.

Protestors in Australia have also turned out. The the country has been hit by a series of devastating wildfires.

Activist Lucky Tran tweeted video of protests she says are from Tokyo:

Thunberg has planned to take part in a student strike in Lisbon, per Reuters, although her zero-carbon emissions sailboat crossing the Atlantic from New York was slowed down a few days by high winds. Protests took place in Portugal Friday.

According to the Associated Press, protestors near Paris blocked one of Amazon’s warehouses to protest over-production. They reportedly had signs that said: “Amazon: For the climate, for jobs, stop expansion, stop over-production!”

“The planet burns, oceans die, and we still want to consume, consume, and therefore produce, produce – until we eradicate all living things? … We will not betray our children for a 30% discount!” also reads the manifesto of protestors around Paris, per the AP.

Some French lawmakers have proposed banning Black Friday because it causes “resource waste” and “over consumption,” the AP reports.

In an article posted on the website Project Syndicate, Thunberg, and activists Luisa Neubauer and Angela Valenzuela called for a strike next Friday as well. “To the leaders who are headed to Madrid, our message is simple: the eyes of all future generations are upon you. Act accordingly.” 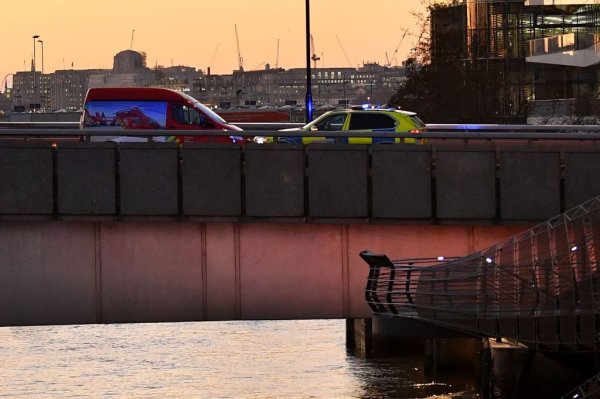 2 Killed in London Stabbing
Next Up: Editor's Pick