After years of equivocation on climate issues by politicians and leaders around the world, young people have had enough.

That’s the message from the young leaders of Friday’s global climate protests, which drew hundreds of thousands of people to climate “strikes” around the world in anticipation of a U.N. summit in New York.

“We see the world as it is, we see it really clearly,” says activist Jeremy Ornstein, 18. “Seeing it as it is and as it could be — that’s what we call moral clarity.”

In Boston, Ornstein and thousands of other young activists gathered at City Hall Plaza, before making their way to the Massachusetts Statehouse building. Ornstien gave an address to a cheering crowd, as did older figures, like Obama Administration EPA Administrator Gina McCarthy.

Similar scenes played out across the U.S. on Friday, with more than 800 climate protests were planned across the nation, according to the Associated Press. In city after city, from New York to San Francisco, images emerged of streets packed with young people demanding their voices be heard.

In Washington D.C., thousands of protesters marched to the Capitol Building, carrying signs calling out an urgent climate crisis. Many were teenagers taking time off school to gather outside the nation’s seat of power.

“Our Earth is dying,” A.J. Conermann, 15, told the Associated Press. “And if we don’t do something about it, we die.”

Many liberal-leaning leaders lent their support to the protests aligning themselves with what may be emerging as a global youth movement. Massachusetts Senator and Presidential candidate Elizabeth Warren sent out a message of support to climate protesters in her state’s capital. “You’re building a grassroots movement that will make sure that we fight back before it’s too late,” Warren said in a video address.

The New York Mayor’s office lent their own encouragement in a tweet citing the city’s youth “leading the way” on climate.

But for some protesters, the movement is more about challenging those in power than aligning with them, as some leaders say that even climate action supporters in government have failed to grasp the urgency of the crisis.

“This tactic of a strike, of disrupting our days as usual…send[s] a message about how seriously this climate crisis interrupts our regular lives,” says Ornstein. “That’s the message these politicians need to hear.”

Those messages were not just confined to U.S. lawmakers. Around the world, protesters poured into the streets to demand their voices be heard.

“We’re already in the midst of the climate crisis,” London activist Lola Fayokun, 18, tells TIME. “Young people here have been able to think about climate change in a more immediate way because they understand that it will affect their futures.”

“We understand that if we don’t fight for a livable planet, there is no future for us.”

Activists say there were more than 200 events across the UK on Friday. In Australia, more than 300,000 people turned out on the streets according to the Associated Press, demanding new climate action in a country known as the world’s largest exporter of coal and liquified natural gas.

“The world is literally on fire,” one young activist in Australia yelled in a video shared by Bloomberg.

Glenn Hunt—Getty ImagesGlobal Climate Strike protestors are seen at a rally in Brisbane on September 20, 2019 in Brisbane, Australia.

Young protestors play with a large globe on September 20, 2019 in Sydney, Australia. Rallies held across Australia are part of a global mass day of action demanding action on the climate crisis. (
Brook Mitchell—Getty Images

Hundreds of other climate protests took place in nations around the world, from Thailand to Hong Kong to Vanuatu in the Pacific. In Kabul, photos emerged of dozens of young women marching with signed, flanked by armed guards with assault rifles. More than 800 climate protests were planned in the U.S. on Friday, while 400 were planned in Germany, according to the AP. In that nation’s capital, authorities said that more than 100,000 people had gathered at Berlin’s Brandenburg Gate, reported the AP.

“The first thing is we have to talk about climate change,” says Indian activist John Paul Jose, 22. “Media should talk about it, and [in] elections it should be a main discussion.”

Jose, who marched with around a thousand protesters in New Delhi, says he feels that Indian politicians have largely been ignoring climate change, and have done little to educate the population on climate issues in schools. His group confronted police barricades, which prevented them from gaining entry to government buildings. Ultimately, he says, the police allowed a small group of protesters through to bring a petition to government ministers.

In Brazil, dozens of young people gathered outside the state legislature in Rio de Janeiro, protesting the far-right administration of President Jair Bolsonaro’s inaction on climate and other environmental issues, according to the AP. This summer, the world’s attention turned to Brazil’s Amazon rainforest, where massive fires could be seen from space.

Global leaders lent their support to Friday’s mass mobilization. The Elders, a group of world leaders founded by Nelson Mandela, expressed their support for the climate action.

“We need to have the courage to boldly step away from the status quo and make the changes that are needed for our planet,” said Ban Ki-moon, former UN Secretary-General and Deputy Chair of The Elders.

Over 6,000 websites and companies are also participating in a “Digital Climate Strike,” including Tumblr, Kickstarter and WordPress. Over 2,000 scientists from over 40 countries are also striking to raise awareness. Some companies, like Patagonia and Ben and Jerry’s, are closed on Friday in solidarity.

Swedish climate activist Greta Thunberg, 17, whose “Fridays for Future” climate protests helped inspire this most recent round of climate action, expressed surprise at the scale of this Friday’s demonstrations.

“I would never have predicted or believed that this was going to happen someday and so fast,” she told the Associated Press.

In late August, UN Secretary General António Guterres called on world leaders to expand the ambition of their commitments to tackle climate change in the face of dire warnings from scientists.

President Donald Trump announced the U.S. would withdraw from the Paris climate agreement in 2017.

In Paris, teens and children, some as young as 10 years old, walked out of classrooms to join calls for coordinated government action on climate change. “The only way to make people listen is to protest,” Marie-Lou Sahai, 15, told the AP.

In London masses of protesters congregated in Westminster, with other “feeder strikes” joining from other areas of the city.

As Fayokun explains, the protesters there are marching for “climate justice.” They want leaders to take action to transition to a carbon neutral society while ensuring protections for historically marginalized groups.

Whether leaders will act on any part of those demands, of course, remains to be seen.

“I think we’re being listened to,” Fayokun said, as the protests in London were starting to wind down. “But I’m not sure if what we’re asking for is actually being heard.” 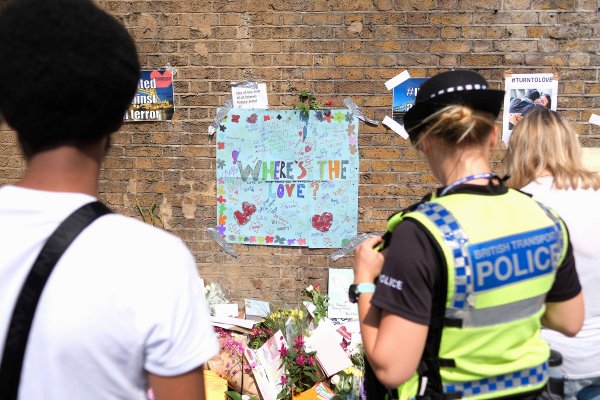 Far-Right Terrorism Is the Fastest Growing Threat to the U.K., Police Say
Next Up: Editor's Pick