Why Chile’s Inability to Host the U.N. Climate Talks Is Symbolic of the Work Activists Still Need to Do

Chile was set to host the 2019 U.N. climate talks, or COP25, in a couple of weeks—the culmination of an unprecedented year for climate activism. But, after weeks of protests across the country, Chilean President Piñera decided to withdraw Santiago as the host city for this much anticipated international summit.

Shortly after Chile announced it could no longer host COP25, the Spanish government stepped in to offer Madrid as the new venue—the conference will go ahead. While it’s good news that the only international process for global climate action will still be able to meet, this resolution to what seems like just a logistical challenge is not so simple. It means the massive disenfranchisement of Latin American social movements who have spent the last year organizing around this major conference. This swift return to scheduling as planned also threatens to brush over an important lesson for a process like the climate talks: if they are to stay relevant and effective, greater efforts are needed to understand how current political and economic systems are at odds with the needs and aspirations of ordinary people.

The protests in Chile were triggered by a resistance to an increase in metro fares and living costs, turning into an insurrectionary wave calling for social justice that’s rocking the political system to the core. This same wave is being seen across the world. No longer able to withstand economic and social injustice inflicted on them by neoliberal policies, people everywhere are taking to the streets en masse.

There’s a straight line between these crises and the climate crisis. Both are fueled and perpetuated by a global system based on exploitation—of human and environmental capacity—that has left our planet and most of its people bereft. The protestors—many of them young people—may be blamed for the “cancellation” of the COP, but we ought to remember the French Yellow Vest protestors’ chant of “end of the world, end of the month, same perpetrators, same struggle.” The same policies that allow big polluters to exploit our planet with little consequence, also allow them to grow their wealth at an alarming rate, while the poorest people are left to contend with lower wages and higher costs of living. It’s for this reason that Chile’s inability to host COP25 is symbolic of the work we still need to do.

At the same time as escalating unrest, calls for a Green New Deal are gaining momentum. A proposal for the radical transformation of our economy and politics, inspired by the New Deal reforms undertaken by President Franklin D. Roosevelt in the U.S. in response to the Great Depression of the 1930s. In the U.S. it has been popularized by the Sunrise Movement and championed in the halls of power by Congresswoman Alexandria Ocasio-Cortez, offering tangible hope for change. The Green New Deal is a national action plan with principles that reimagine what an economy run in the interests of people and the planet could look like: good, secure, well-paid and meaningful jobs; restoration and protection of the natural world; rapid decarbonization. These aren’t just principles to ensure a future as the climate crisis unfolds—they’re ideas to create a good future, unshackled from the dominating forces of capital and corporate greed.

But a radical Green New Deal needs to set its sights further than national transformation. Without internationalism at its core, it will never be equitable nor will it address global inequality. In the U.S. and the U.K., where the calls for a Green New Deal are strongest, that means rapidly and justly decarbonizing to tackle climate breakdown, accounting for historic emissions and colonial exploitation of resources and communities. It means leading a radical global redistribution of wealth and transferring of technology to those that have paid the biggest price for our growth. Without this, our efforts at greening might perpetuate the very problems we are trying to solve. Just a year out from the U.S. presidential elections, and just mere weeks away from a snap election in the U.K., both countries have a real chance to elect governments committed to such ideals.

For decades, global attention has been focused on agreeing to a decarbonization target, but since the Paris Agreement in 2015 when world leaders agreed to net-zero carbon emissions by 2050, little headway has been made in bringing forward credible plans to get us there. More importantly, funding to help developing nations reduce their emissions has failed to materialize.

Some have suggested setting up an International Green New Deal modeled on the post-World War II Marshall Plan that would raise trillions each year for the transition to renewables. It would provide necessary global coordination for investment, innovation and reparations to countries who have had their resources exploited. It’s this kind of effort and mobilization of resources that would transform the global economy. But whether an entirely new institution is needed or not, one thing is true — the U.N. climate talks are a site of active struggle for those fighting for global justice. The talks have long divorced environmental rehabilitation from economic justice, facilitating piecemeal efforts and often obscuring the seismic shifts required at a system level to bring balance back to the world.

A Green New Deal is our best chance to meet both challenges at the scale required. Embracing it will help us to build a future that works for everyone, everywhere, while helping us avoid irreversible ecological collapse. 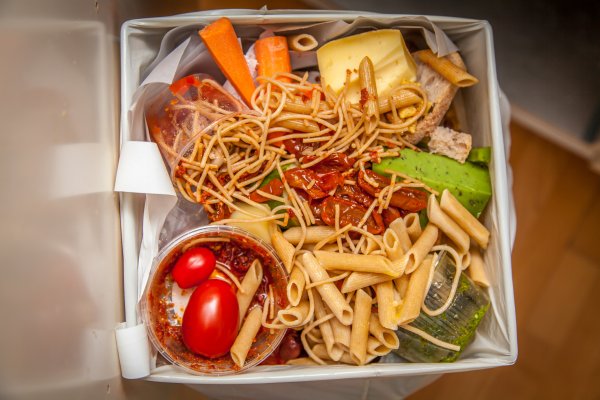 We Are Wasting a Massive Amount of Food. Here Are 4 Concrete Ways to Change That
Next Up: Editor's Pick