'It Will Be Too Late for My Generation.' Meet the Young People Organizing a Massive Climate Change Protest

Thousands of schoolchildren across the U.S. will be protesting on Friday, uniting with young people around the globe in a goal they believe is critical to their collective future: pressuring world leaders into acting on climate change, particularly to cut carbon emissions over the next decade in order to reduce the extent of global warming.

“March 15 is going to make history,” 13-year-old Alexandria Villasenor, a co-founder of the U.S. Youth Climate Strike, tells TIME. “There has never been a global day of climate action where students around the world are taking action for the same exact cause.”

Young people in nearly 100 countries—including China, Uganda, New Zealand and Chile—strikes in solidarity on the same day. The movement was primarily organized by three schoolkids — Villasenor of New York, Haven Coleman of Colorado and Isra Hirsi of Minnesota (who also happens to be the daughter of freshman member of Congress Illan Omar) — with an assist from hundreds of teens and tweens on the state and local level.

The teens, who expect about 100,000 students to protest on Friday, collaborated via Google docs, late-night conference calls and Slack to garner support from thousands of young people from across the country in less than two months.

High school students demonstrate outside the Pantheon monument in on March 15, 2019. Students worldwide are skipping class to take to the streets to protest their governments' failure to take sufficient action against global warming.
Francois Mori—AP

Coleman, 12, says the fight is a personal one. “[Climate change] has been affecting my whole life, it’s going to be affecting everybody in my future.” The tween says she personally felt the effects when she had difficulty breathing due to the smoke from last year’s wildfires in California.

The devastation of last year’s wildfire season was also a “wake-up call” for Villasenor. The deadliest fire in California’s history, the Camp Fire, broke out when she was visiting family in Davis, Calif. Villasenor’s family lives about an hour away from Paradise, where the wildfire killed dozens and ravaged the community. She says the smoke was so bad for her asthma that her family had to fly her out of California early back to New York City.

“That was really scary for me and traumatic,” she says, and recalls seeing ambulances pick up people who dropped on the sides of streets because of the smoke.

Villasenor says that experience prompted her to research climate change, “I decided that, my generation, since it will be affected the most by climate change, I need to start taking actions now,” she says. She has also skipped school every Friday since last December to protest in front of the U.N.

Jerome Foster II, 16, helps organize the strike in Washington, D.C., and says working alongside so many other young people is “empowering and motivating.” Balancing activism and school is challenging for Foster, who is in his junior year in high school. He interns for Congressman John Lewis and works for the Obama Foundation as a liaison for the youth. “I am striking not just to strike,” he says. “But striking because climate change is bigger than any other things that are going on in my life now.”

School children taking part on a die-in during a Youth Climate Strike in front of the New York Headquarters of the United Nations on March 15, 2019 in New York City.
Johannes Eisele—AFP/Getty Images

“It’s been like a ticking time bomb type situation where we have 11 years left at this point to fix climate change and to make sure we are leaving a sustainable earth for the future generations,” Isabel Hope, who helps organize the strike from Tuscaloosa, Ala., says, referring to a report published by the U.N. Intergovernmental Panel on Climate Change, which said temperature rise will increase the risk of heat waves and heavy rainfall events — resulting in even more severe wildfires and hurricanes.

“Politicians in Alabama have been extremely silent on the issue of climate and global warming,” Hope says. “Alabama may not be the ideal environment for U.S. climate activists, [but] it does not mean that we are going to let our community be crushed by climate change.”

Villasenor said the young people in the movement can’t wait until they are in positions of power to make change, “because by then it will be too late for my generation. We don’t have any time to waste.”

As a first-time organizer, Villasenor was partly inspired by Greta Thunberg, a 16-year-old Swedish activist who started the first school strike for climate outside her country’s parliament building in August 2018, and was just nominated for a Nobel Peace Prize for her work. Her strike has sparked youth protests across Europe and Australia. Although no concrete policy changes have happened since the movement started, Villasenor believes this time is going to be different.

Thousands of students demonstrated during a 'climate strike' protest in Zurich, Switzerland, on March 15, 2019.
Walter Bieri—EPA-EFE/Shutterstock
Students hold placards during a strike as part of a global day of student protests aiming to spark world leaders into action on climate change, in Kampala, Uganda on March 15, 2019.
Isaac Kasamani—AFP/Getty Images

“This is different because now the whole world is involved,” says Villasenor, who expresses confidence in creating changes with the strike on March 15. Hope echoes that sentiment, “I am seeing it from all of the organizers across the globe: I am seeing the passion, I am seeing the extreme work ethic that all of us share.”

The group says they hope to raise awareness about the urgency of addressing climate change through the March 15 school strike, but they are not stopping there. The youth activists say they are already planning another global climate strike in May.

“We will not be stopping, Villasenor says. “We are going to do really whatever it takes.”

Write to Ang Li at ang.li@time.com and Brian Braganza at brian.braganza@time.com. 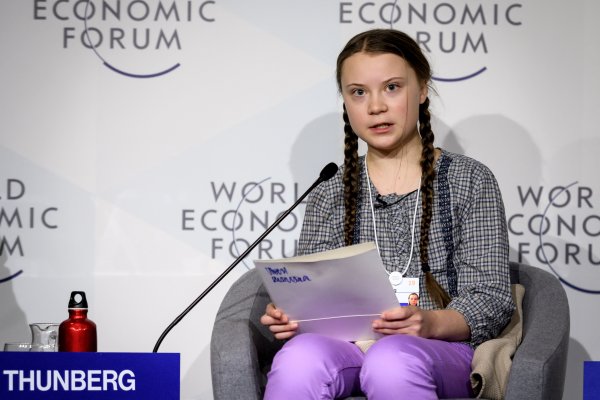