To say that Rian Johnson’s Star Wars: The Last Jedi is watchable even by those who have zero investment in the Star Wars franchise or its characters may sound like faint praise, but it’s really the highest. Johnson, who also wrote the script, has taken a property—one that by this point has so many characters, so much mythology and so many requirements—and given us an actual movie. Most big-ticket franchise filmmaking these days amounts to ticking off a series of boxes. If Johnson has ticked any, he’s done it in private, shielding us from all those horrid practicalities. His movie has a sense of humor about itself and a sense of joy, but its emotional generosity, even in the midst of all the extravagant green-screen work, is its best special effect. He’s taken Disney’s money and given the audience all the things money can’t buy: Instead of selling to us, he’s speaking to us. You can feel the difference.

The story, peopled by characters created in a galaxy far, far away by George Lucas, is easy to grasp even for neophytes: The old Empire has crumbled and the fascist First Order has risen in its wake. Kylo Ren (Adam Driver), an ambitious up-and-comer in the world of evil, taking all his cues—and wardrobe inspiration—from his idol Darth Vader, has been currying favor with the First Order Supreme Leader Snoke (Andy Serkis), a sinister boss king who looks like a desiccated 200-year-old Kirk Douglas in one of Lana Turner’s Adrian gowns. But some of the wind has gone out of Ren’s sails: Last time around, in the 2015 The Force Awakens (directed by J.J. Abrams), he killed Han Solo (Harrison Ford), who, it turned out, was his own father. It’s clear he hasn’t felt so great since. When he removes his Vaderesque mask for the first time in The Last Jedi, his face bears physical scars and emotional ones, mostly around the eyes: As Driver plays him, even his irises look bruised.

Meanwhile, the Resistance rages, both surreptitiously and obviously, against the First Order. Domhnall Gleeson’s officious General Hux is the commander of a warship ready to whup the Resistance’s ass—he’s advancing on the ship commanded by the group’s leader, former-princess-now-general Leia (Carrie Fisher), and in the movie’s early moments, he gets on the horn to give scrappy Resistance pilot Poe Dameron (Oscar Isaac) what for. Poe responds with a virtual yawn: He hears every word Hux is saying, but he acts as if he couldn’t care less. Hux’s fuse is lit. “Open fiah!” he commands, in a line that brings down the house. A ridiculous bully who thinks he’s classy is one of the funniest things in the world, and Johnson signals to us that he knows it.

From there, The Last Jedi takes off like a shot. Johnson has to deal with the classic Star Wars franchise problems—you’ve got to find something meaningful for all these characters to do, and all of it must cohere into an at least semi-meaningful plot. At times the movie feels cluttered. How could it not be? But Johnson makes the most of individual scenes, shaping each with care and vigor. And he does well by every character, the old ones—like Storm Trooper-turned-Resistance-fighter Finn (John Boyega)—as well as the new: Laura Dern shows up as a military leader with a fluff of violet flapper hair that belies the steel at her core. And the movie introduces a sweetly appealing character named Rose (Kelly Marie Tran), a shy Resistance underling who at first worships the movement’s heroes, and then gets a chance to become one herself.

Johnson even introduces a flicker of unrequited love between Finn and Rose. But Finn’s heart, as we already know, belongs to the Force powerhouse orphan Rey (Daisy Ridley), who has found her way—piloting the late Han Solo’s cherished Millennium Falcon—to the island on which Luke Skywalker (Mark Hamill), a Jedi who’s lost every drop of his mojo, has sequestered himself. The scenes on this island are the movie’s quietest, and its best. It’s a gorgeous rocky landscape, shivering in its desolate beauty. The island is home to a bunch of adorable chubby birds known as porgs, as well as creaky nunlike characters who maintain, with crotchety strictness, the cavelike structures that hold all those ancient Jedi secrets. This is the Michael Powell section of the film, evoking both the weird dreaminess of the great English filmmaker’s Black Narcissus and the rugged half-natural half-mystical landscape of his Hebrides love letter The Edge of the World. Cinematographer Steve Yedlin makes its mysteries sing.

Rey needs to persuade Luke to come back to the Resistance fight, but he resists. He’s a shell of his old, swaggering self, a gaunt figure in a hooded cloak: All the fight has been beaten out of him, but Hamill’s performance nonetheless shows us the still-burning soul cowering deep inside this husk of a man. Luke gets the movie’s most glorious moment, and also its funniest; Hamill deserves both.

Johnson made his entrance as a filmmaker with the 2005 indie hit Brick, and his last feature was the 2012 futuristic crime drama Looper. Neither picture would suggest that he’d be this good at huge-budget mega-blockbuster fantasy filmmaking. But as it turns out, he has a gift for orchestrating massive action scenes with specificity and a light touch: The finest is a multi-player light saber battle that’s regal and thrilling, a gorgeous set piece that seems to take its cues in part from Balinese puppet theater.

There’s wonderful stuff here, like a gang of friendly crystal foxes who skitter across an icy landscape on dainty tapered paws. And an old, pointy-eared favorite makes a ghostly, thoughtful cameo. But it’s Johnson’s handling of Leia’s character that says the most about his approach to the material. Because Fisher is now gone, you’d assume that Johnson would have written Leia out of the story with a grand, melodramatic flourish. That’s what almost any other filmmaker would have done, and it would have been fine. Instead, Johnson gives us something at once more delicate and more satisfying. We’ve already had to say goodbye to Fisher in real life. In The Last Jedi, Johnson gives her an alternate ending, refusing to milk tears from us and instead allowing us to revel in all that was great about her, her sandpaper-velvet voice and her decisive way around a wisecrack. No matter how much money has been poured into a movie, it’s emotional generosity that matters, and Johnson gives without squandering. His great gift is that he knows when to stop. 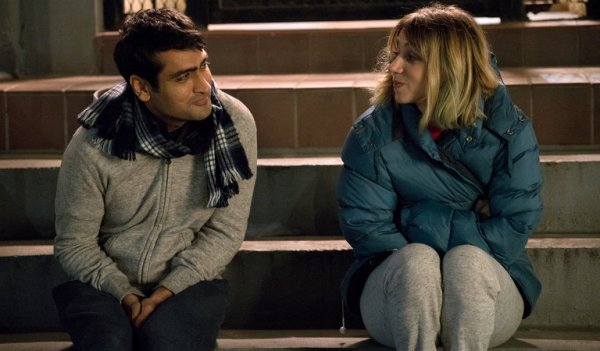 Steven Spielberg Is Apparently a Major Fan of 'The Big Sick'
Next Up: Editor's Pick