Pulling into the driveway of Jamie Lee Curtis’ house on the west side of Los Angeles, I am met by her dog Runi, a rescue terrier-poodle that bounds down the stairs like an animated ball of fluff, tail wagging. Curtis is not far behind, striding down to meet me warmly as if we are already old friends. She’s tall and trim, and her gaze is intense–in a good way. Upstairs in her kitchen, she fixes a cappuccino and pours me a tall glass of mint water and we start talking. She brings up her new film Halloween, a new imagining of the granddaddy of the contemporary horror movie, and the book she’s reading about World War I, as well as trauma and healing and the state of America, and soon we’re both getting emotional, and over an hour has passed before I even think to turn my tape recorder on. Everything she says is absolutely sincere–about herself, the world we’re living in and her very long career.

It’s a career that spans four decades of roles in television and film. The original Halloween was the one that made her a star back in 1978. Her performance as Laurie Strode, a teenage babysitter being hunted by the killer Michael Myers, and the string of horror films in which she subsequently starred earned her the title Scream Queen, though she’s also been in a lot of other kinds of movies: the Oscar-nominated heist comedy A Fish Called Wanda and James Cameron’s action thriller True Lies, in which she delivered a now iconic striptease, and Disney’s 2003 remake of Freaky Friday, in which she body-swapped with Lindsay Lohan. Along the way she did many other things too: she wrote 13 children’s books, became an accomplished photographer, got sober and talked openly about it, invented a diaper with a built-in pocket for wipes (seriously) and started a family, marrying the beloved writer-director Christopher Guest (Waiting for Guffman), with whom she has two children. All of this helped make her an icon, at once outspoken and relatable.

But Halloween is what started it all, which makes this new telling of the story a full-circle moment for Curtis. It might have seemed risky to exhume what was, to some, a tired franchise. But Jake Gyllenhaal, Curtis’ godson, encouraged her to do it; he raved to her about the director David Gordon Green, whom he’d worked with on the movie Stronger. Green sent Curtis the script for this new Halloween. “I understood right away what he was trying to do,” she says. “This didn’t begin as a franchise–that word didn’t exist! It was a little horror movie about babysitters.” Green’s vision was to wipe the slate clean, as if the many other sequels and spin-offs from the Halloween story, both those that featured Curtis and those that didn’t, never happened. “In this universe, something f-cked up happened 40 years ago,” Curtis says, “and 40 years later, we’re going to see what happened to that girl.” Now Strode is older and wiser, though her daughter Karen (Judy Greer) thinks Laurie is paranoid and hysterical to still be convinced that the man who terrorized her as a teenager will someday come after her again. Even Laurie’s granddaughter Allyson (Andi Matichak) is a little wary of her. But when a bus carrying the since-incarcerated Myers crashes and he escapes–on Halloween night, of course, exactly four decades since the events of the first film–her worst fears are confirmed.

For Curtis, who’s not a fan of horror movies as a genre–“I don’t like them at all!” she says–this new Halloween represented a way to tell a story about trauma, especially the many kinds that women endure. “The movements of #MeToo and #TimesUp, all of it, is a result of generational, systematic abuse of women, and the trauma that abuse generates in a person,” she says. Yes, it’s a slasher flick, and one in which teens–as well as adults–get gutted by a masked, knife-wielding psychopath. But it’s also a film that’s curious about how people cope, even many years after being traumatized, and about the nebulous boundary between anxiety and paranoia when you have a very good reason to be afraid. When Laurie booby-traps her house in anticipation of an attack, she’s not crazy: she’s just steeling herself for the inevitability that a bad guy will come back for her.

It helps that, unlike many horror movies–including several in the Halloween franchise–this new one manages to be cheeky, smart and genuinely scary. The script is laugh-out-loud funny. Yet there was also space for Curtis to play with this character who’s since become the archetype for the “final girl”–the horror-movie heroine who finds a way to survive. During filming, Green called her one morning to tell her he was constructing a shot where Laurie sees on the news that Myers has escaped, and asked Curtis what he thought Laurie would be doing in that moment. “And I went like this,” Curtis says, and she snaps her fingers. “She’s making Nesquik strawberry milk. Because she’s still frozen at 17, when she used to make strawberry milk in the morning.” This attention to detail, this consideration for what life would be like for a character who’s survived something so terrible, is what gets her excited. “I came back from this movie remembering–this can be super fun and creative and collaborative!” It energized her so much that she came home and wrote a screenplay, for an eco-horror movie that she plans to direct. “It kicked me into a creative space,” she says.

Creative spaces are familiar for Curtis, who grew up in Hollywood, the daughter of legendary actors Tony Curtis and Janet Leigh. But she’s as voluble when discussing her other interests as she is talking about her movies. The subject of her recovery from an addiction to painkillers, which she calls “the single greatest thing I’ll ever do in my life,” leads to a conversation about the opioid epidemic in America, and we talk for a long time about her latest children’s book, Me, Myselfie & I: A Cautionary Tale, about a mom who becomes obsessed with documenting her family’s life. “I’m terrified by social media–the obsession with our curated lives,” she says. “I don’t proselytize, because I cop to it too! How quickly you can hit the little booster button that brightens you up. The idea that we can no longer look at our unvarnished selves at all. A selfie is by nature self-loving, but it’s become self-loathing.” I leave her house with no fewer than four books that she wants me to read, including that World War I book, Wade Davis’ Into the Silence. (She bought multiple copies to give away to friends, as she does with many books she loves.)

A few weeks later, Halloween opens to glowing reviews and a monster take at the box office, earning over $77.5 million. It marks several milestones, including the biggest horror-movie opening with a female lead and the highest-grossing film opening with a female lead over 55. When Curtis posts on Twitter about these record-breaking stats, her tweet goes viral. She writes me from Australia, where she’s doing press for the movie. “It is a story with a happy ending,” she says. “In my industry this doesn’t happen very often, if ever, and that I am getting this opportunity as I am kissing 60 is beyond my wildest dreams. I’m the luckiest girl in the world.” And she sends me a selfie with the Sydney Opera House in the background. It doesn’t look overly filtered, but she’s still glowing. 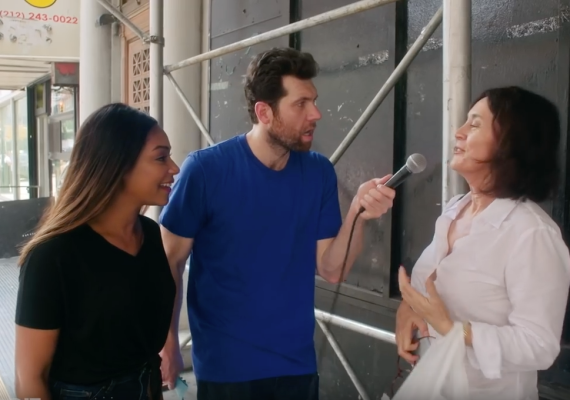 Billy Eichner and Tiffany Haddish Go on a Mission to Cast a 'Woke' Hocus Pocus
Next Up: Editor's Pick