In a year marked by charged debates surrounding identity and belonging—and continuously breaking news of violence and division—the best of fiction helped us to process. Authors both established and emergent cut through the noise with stories of transcendent love, courageous confrontations with power and histories that must not be forgotten, offering books that show us who we are, who we have been and who we should strive to become.

10. Drive Your Plow Over the Bones of the Dead, Olga Tokarczuk (trans. Antonia Lloyd-Jones)

Olga Tokarczuk, who was awarded the 2018 Nobel Prize for Literature, trains her imaginative mind on the story of Janina, a 60-something Polish woman with an otherworldly appreciation for animals. It’s a love that, much to her outrage, runs counter to the most popular activity in her small Polish village: hunting. When the town is hit with a string of murders, Janina is certain there must be a connection to the killings of animals. As the misunderstood protagonist intrudes on the police case, Tokarczuk raises essential questions about whose voices are privileged above others.

Buy now: Drive Your Plow Over the Bones of the Dead

The novelist, essayist and poet blends the perspectives of a quick and ruthless high school debate champion, his psychologist parents and a misfit peer in The Topeka School, a poignant examination of “toxic masculinity” and its manifestations in speech. Adam Gordon, a character first introduced as a grown man and a poet in Lerner’s debut novel Leaving the Atocha Station, is a slick talker, a chameleon as comfortable dominating his school’s social scene as he is in his parents’ home. Adam’s winning approach to competition—subjecting his challengers to “the spread,” where they’re forced to respond to a blast of ideas at the pace of drinking from a firehose—deftly reflects the demise of civil discourse.

A devastating story born of real-life heartbreak, Yiyun Li’s Where Reasons End places a mother in conversation with her son after losing him to suicide. Li wrote her highly original and deeply affecting novel in the wake of her own son’s suicide. In the book, the narrator visits with 16-year-old Nikolai in a liminal world of Li’s creation, somewhere between the realms of the living and the dead. As the two relive their old ways of being together and speaking to one another, Li unfolds a moving meditation on the limitations of language—a tool that is equipped to relay neither life’s most harrowing pain nor its fiercest love.

Breakout poet Ocean Vuong made a dazzling entrance into fiction this year with his semi-autobiographical novel, On Earth We’re Briefly Gorgeous. Vuong brings his mastery of evocative, lyric language to his story of Little Dog, a Vietnamese-American boy growing up in Connecticut with his mother and grandmother—survivors of the Vietnam War—and bearing the weight of inherited trauma. In the form of a letter to his illiterate mother, who was violent with him as a child, Little Dog retraces his harrowing upbringing, a life-altering relationship with the opioid-addicted grandson of a summer employer and the ultimate solace he discovered in books and writing.

In the hormone-laden and pressure-fueled world of a performing arts high school, two acting students get locked in a heady romance—only to be watched, judged and influenced by their peers and even their drama teacher, a man with questionable motives. National Book Award winner Susan Choi crafts a visceral adolescent world rife with tension, sexual and otherwise, and renders the insecurity that accompanies it with excruciating realism. That is, until she introduces a shift in perspective midway through the novel that undermines the veracity of the story. With a boldly unconventional structure, Choi points to essential truths about power and who gets to control the narrative.

Marlon James invents ghoulish and glittering new worlds in perhaps the most ambitious novel of the year, the fantasy epic Black Leopard, Red Wolf. Disrupting a genre too often reliant on flaxen-haired princesses, swashbuckling knights and fire-breathing dragons, the first book of a promised trilogy draws on African mythology and history to create a deeply immersive universe filled with more than 80 characters—shape-shifters, vampiric birds, translucent children, mermaids, vengeful hyenas and more. Navigating these verdant and treacherous worlds is Tracker, a mercenary known for his unmatched sense of smell, as he joins a crew assembled to find a missing child. James, who won a Booker Prize for A Brief History of Seven Killings, his novel featuring Jamaican patois, writes in dense, inventive language—challenging at first, then wholly absorbing.

It’s a classic opening: a woman hears an intruder in her home while her husband is away, grabs her two young kids and hides in terror. But the true power of Helen Phillips’ brilliantly paced thriller emerges when Molly, a paleobotanist, comes face to face with the only person in the world who can shake her identity as a mother—a person who brings her to question her very reality. Phillips taps into the overwhelming anxiety that comes with love in its deepest, truest form, a sense of fierce protectiveness one need not be a parent to understand.

In a year when family separation regularly made headlines, Valeria Luiselli found a profound way into the story through fiction. In her first novel written in English, the Mexican author sends a blended family of four—a daughter and her once-single mother, married to a once-single father with a son—on a road trip across the U.S. from New York to Arizona. The man and woman fell in love over a shared assignment, documenting the audio landscape of New York City, and their appreciation for sound adds an evocative texture to Luiselli’s lush prose as they travel. But on the trip—designed in part to take the husband to his next project in Apacheria, in part to allow the mother to search for a friend’s daughters who have been detained at the border—the family’s own bonds are tested.

Thirty-four years after she published her classic, The Handmaid’s Tale, Margaret Atwood returns to the Republic of Gilead to further her exploration of oppressive regimes. Where the original novel described the totalitarian theocracy of Gilead through the claustrophobic perspective of one woman, Offred, The Testaments broadens in view to recount the rise and fall of the regime through the eyes of three. Agnes Jemima is growing up in Gilead, preparing to learn the duties she will inherit as a privileged but severely restricted wife. Daisy is a vibrant teenager living in Canada, protesting against the maligned society that looms just south of her hometown. And Aunt Lydia, a vicious leader in Gilead familiar from The Handmaid’s Tale, is developing a more complicated relationship to the regime than the original novel suggests. The result is a thrilling and worthy continuation of Atwood’s indelible dystopia—another warning that totalitarianism is always lurking just around the corner.

Whitehead builds on his award-winning story of American slavery in The Underground Railroad with another tour through painful history, this time revisiting the Jim Crow era. The Nickel Boys follows Elwood and Turner, teen boys sentenced to an inhumane Florida reformatory (based on the shocking true stories of abuses at the Arthur G. Dozier School for Boys). Together with their peers, Turner and Elwood contend with their disparate and often discouraging ideas of what the country will offer them when they come of age as black men in the 1960s. Whitehead’s rich prose leaves behind the magical realism elements of The Underground Railroad, which won a Pulitzer Prize and a National Book Award—and instead conjures the brutally realistic hopes, shattered dreams and resilience of his characters. He renders a terrifying world in disarming terms, lovingly guiding his reader to recognize the lasting impact of a cruel era. 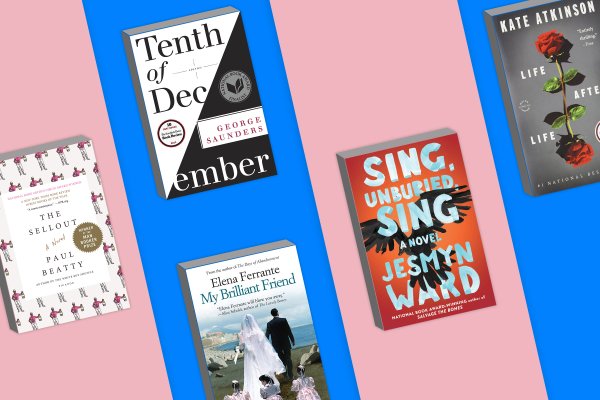