Two Authors Just Won the Nobel Prize for Literature. Here's What to Know About Them

Last year’s Nobel Prize for Literature had been cancelled in the wake of sexual assault allegations and significant resignations in 2017 that rocked the Swedish Academy administering the Nobel Prize.

Here’s what to know about the two central European authors.

Tokarczuk received the 2018 Nobel Prize in Literature “for a narrative imagination that with encyclopedic passion represents the crossing of boundaries as a form of life,” the Nobel Academy said.

Tokarczuk, 57, was born in 1962 in Sulechów, Poland. She now lives in Wrocław. She was immersed in literature from a young age. Her parents were teachers and her father was also a school librarian. In the library, “she read pretty much everything she could get hold of,” the Academy says in a biography of the author.

Her “real breakthrough,” it notes, was with her third novel, Primeval and Other Time — a family saga set in a mythical place. And what the Nobel Academy described as her “magnum opus” to date was the historical novel, The Books of Jacob — a story about an 18th century sect leader whose followers saw him as the new Messiah. That book won The Nike Prize, a prestigious Polish literary award that has been described as “Poland’s Booker equivalent” and an English translation is expected to release in spring of 2021.

Tokarczuk is not new to international acclaim either. Last year, she became the first Polish writer to win the Man Booker International Prize for her novel Flights, about travel in the 21st century, borders and human anatomy. This year, her newly translated book, Drive Your Plow Over the Bones of the Dead, has been short-listed for the same prize; the story is a thrilling murder mystery in which horoscopes help solve homicides.

Tokarczuk said in a phone interview with the Academy shortly after winning the prize that she was “surprised” and “cannot find the right words” to express how she feels. She added that she was happy to know that both awards went to authors from central Europe, noting the region’s challenges with democracy.

Tokarczuk is not well liked by Polish conservatives and her criticism of the country’s past, including its anti-semitic episodes has sparked death threats, the Associated Press reported.

“She is uniquely insightful” when it comes to “figuring out a person’s psychology,” Jennifer Croft, a translator for two of Tokarczuk’s novels, tells TIME. “She is really fascinated by people’s quirky eccentricities.” Croft says that she has always been “100% sure” that Tokarczuk would win the Nobel Prize for Literature one day. “I always told publishers that,” Croft says. She describes Tokarczuk’s style as “rhythmic, lyrical, clear” and one that aims to “reinvent the novel” by connecting seemingly unconnected fragments of stories. “The reader is supposed to connect it however he or she sees fit,” Croft says.

Handke received the 2019 Nobel Prize in Literature “for an influential work that with linguistic ingenuity has explored the periphery and the specificity of human experience,” the Academy said.

The Academy characterizes his work as possessing “a strong adventurous spirit” and a “nostalgic inclination” — especially in the drama, Walk About the Villages, and the novel, Repetition. His writing “shows and unending quest for existential meaning,” it says. The Academy also praises A Sorrow Beyond Dreams, the “short and harsh, but deeply affectionate book” written about his mother’s suicide.

Handke, 76, was born 1942 in a southern Austrian village named Griffen. His mother was part of the Slovenian minority and his father was a German soldier who he would only meet as an adult, according to a biography of the author from the Academy. He grew up with his mother and her new husband and spent his early years in war-torn Berlin before they moved back to Griffin.

Handke studied law at Austria’s University of Graz but dropped out a few years later after his first novel, Die Hornissen, was published in 1966.

Since 1990, Handke has been based out of a French city, southwest of Paris.

Handke’s work is not limited to one form of literature. It includes novels, essays, note books, dramatic works and screenplays, the Nobel Academy says.

Handke has not shied away from politics, either. He protested NATO’s airstrikes against Serbia during the Kosovo War in the 1990s and spoke at former Serbian leader Slobodan Milosevic’s funeral, the Associated Press reported, noting that he has “faced criticism for his vigorous defense of the Serbs” during the war. 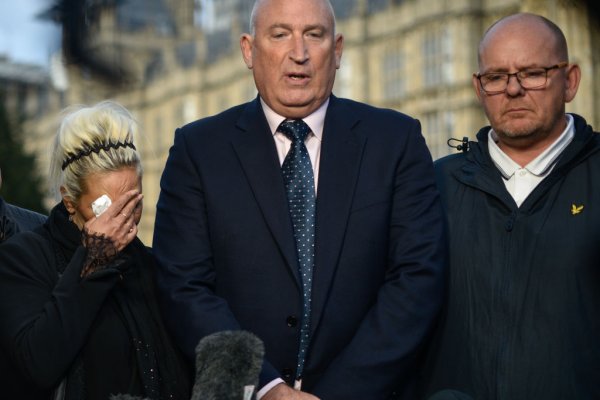 Diplomat's Wife Suspected in Fatal Car Crash Will Not Return to U.K., Trump's Briefing Notes Reveal
Next Up: Editor's Pick