Mike Pompeo Is Searching for a Safe Exit From State Ahead of Senate Run, GOP Sources Say

By John Walcott and W.J. Hennigan

Secretary of State Mike Pompeo has told three prominent Republicans in recent weeks that he plans to resign from the Trump Administration to run for the U.S. Senate from Kansas in next year’s elections. The problem: how to get out in one piece.

Pompeo’s plan had been to remain at the State Department until early spring next year, the three Republicans tell TIME, but recent developments, including the House impeachment inquiry, are hurting him politically and straining his relationship with Trump.

So Pompeo is rethinking his calendar, say the top Republicans, one who served in the Trump Administration, another who remains in government, and a third who served in several high-ranking posts and is active in GOP politics. The timing of Pompeo’s resignation now will be decided by his ability to navigate the smoothest possible exit from the administration, the three Republicans say.

There is no indication whether Pompeo has discussed his plans with President Trump. Rumors of a Pompeo Senate campaign have circulated for months, and while Pompeo has said repeatedly that he has no intention of running, he has not ruled out a race. Pompeo aides previously have denied he was planning to step down. They declined to comment on the record for this story.

“Secretary Pompeo is only focused on executing President Trump’s foreign policy goals and completing the mission for the American people at the State Department. Anyone who says otherwise is just wrong,” a person close with the Secretary said.

As impeachment hearings gain steam, Pompeo faces a dilemma, say the three prominent Republicans, all of whom requested anonymity to discuss private conversations with Pompeo. On the one hand, the longer he stays, the greater the criticism of his failure to defend veteran diplomats and longstanding U.S. policies against the President’s politicization of foreign affairs. Pompeo has declined to defend by name either former ambassador to Ukraine Marie Yovanovitch or diplomat William Taylor, both of whom gave damning testimony against Trump this month.

On the other, Trump and his loyalists are blaming Pompeo for the damning testimony of the State Department employees and for what the loyalists perceive as Pompeo’s insufficiently robust defense of the President.

The closest Pompeo has come to publicly criticizing Trump came last month when Fox Business anchor Maria Bartiromo asked him if the Administration has a broader strategy that included withdrawing U.S. forces from Syria. “My experience with the President is that he makes decisions and then absorbs data and facts, evaluates situations, if we need to adjust our policy to achieve our goals,” Pompeo answered.

Trump has recently groused about Pompeo’s failure to defend him vigorously enough and rein in State Department officials who have told investigators about the Administration’s back channel dealings with Ukraine. The President’s complaints, first reported by NBC News, also have caused Pompeo to reconsider whether sticking with Trump would help or hurt a Senate run, says one of the sources.

Last month, the President criticized Pompeo by name, tweeting that Pompeo “made a mistake” when he hired Taylor, a career Foreign Service officer who had retired and was an executive vice president at the U.S. Institute for Peace. Pompeo chose Taylor to serve as the top American representative in Ukraine after Yovanovitch was recalled as a result of what she called a smear campaign led by Trump’s personal attorney, Rudy Giuliani.

“Pompeo was first in his class at West Point,” says one of the Republicans with whom Pompeo has discussed a Senate run. “He knows that with Trump, loyalty only flows upstream.”

The calculation about when to jump could matter for Pompeo’s chances in Kansas. The state has long been reliably red, but the field is already taking shape for a competitive Republican primary. Former Kansas politician Kris Kobach, current Congressman Roger Marshall and several others have already declared. Others, like state Attorney General Derek Schmidt and former speaker pro-tem of the Kansas House of Representatives Scott Schwab are said to be considering running.

Pompeo has previously received support from Charles and the late David Koch; continuing support would give him a strong financial base on which to run. But a prominent Kansas Republican tells TIME Pompeo can no longer be considered a shoo-in against other Republican contenders. Although it’s too early to predict, he says, the pain Trump’s trade policies is inflicting on the state’s farmers are threatening to suppress Republican enthusiasm and turnout next year.

“Our farmers aren’t dumb,” says this source, a current officeholder who requested anonymity to discuss party politics. “They know that China isn’t paying for tariffs. They are, because they’re taxpayers helping foot the bill for government subsidies. They also aren’t holding their breath waiting for some big trade deal that has the Chinese buying all their crops.”

Kansas is the nation’s largest wheat-producing state, and although Chinese officials have discussed buying as much as $50 billion worth of American agricultural products in a year as part of a partial trade agreement, the deal has remained elusive.

“If Pompeo was thinking he would cruise across the finish line on Trump’s coattails, he might want to rethink that assumption,” says the Kansas Republican. 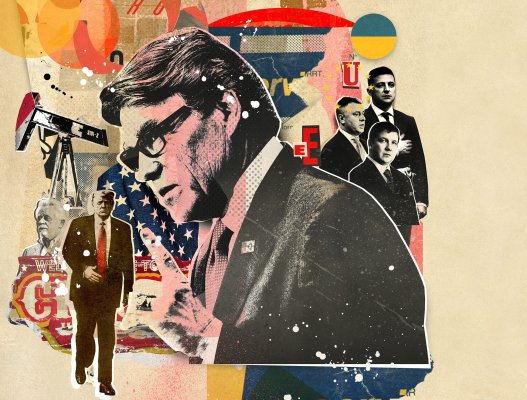