Trump Aims at U.S. Diplomat, Shoots Himself in the Foot

By Brian Bennett and Abby Vesoulis

On Nov. 15, the public got to see what it looks like when President Donald Trump attacks someone in public and the cameras are rolling.

Weeks of hearings, months of allegations, and more than a year of behind-the-scenes maneuvering by Trump’s allies came to a sharp point today as the ousted U.S. Ambassador to Ukraine, Marie Yovanovitch, took center stage in a House Intelligence Committee hearing and Trump decided to tweet about her in real time.

“Everywhere Marie Yovanovitch went turned bad. She started off in Somalia, how did that go?” Trump wrote to 66.8 million followers Friday morning, in reference to Yovanovitch’s early career stint in the war-torn African country. “Then fast forward to Ukraine, where the new Ukrainian President spoke unfavorably about her in my second phone call with him. It is a U.S. President’s absolute right to appoint ambassadors.”

Trump’s message was all the more striking because it came as one Republican after another in the hearing thanked Yovanovitch for her years of service and acknowledged her integrity. “We are lucky to have you in foreign service, and I again want to thank you for your tremendous public service,” said Rep. Elise Stefanik, a New York Republican. “You’re tough as nails and you’re smart as hell,” said Rep. Will Hurd, a Texas Republican who is retiring after this term.

It was not the first time Trump had attacked Yovanovitch, a 33-year civil-service veteran who has served under four Republican administrations and two Democrat-led ones. Following postings in Canada, Russia, the U.K. and Somalia, among other countries early in her career, President George W. Bush appointed her ambassador to Kyrgyzstan and Armenia, and President Barack Obama subsequently appointed her ambassador to Ukraine in 2016. Then, in April, a supervisor relayed that her tenure was over, and that she must get “on the next plane” to Washington.

Three months later, in his now-infamous July 25 call with Ukrainian President Volodymyr Zelensky, Trump targeted Yovanovitch. Trump was the first to bring her up, calling the once-inconspicuous diplomat “the woman” and “bad news.” Zelensky made it sound like Trump had mentioned Yovanovitch before. “It was great that you were the first one who told me that she was a bad ambassador because I agree with you 100%. Her attitude towards me was far from the best,” Zelensky said at the time. To which Trump responded: “Well, she’s going to go through some things,” adding that he would have his personal attorney Rudy Giuliani and Attorney General William Barr, help “get to the bottom of it.”

When she read the summary of that conversation this fall, Yovanovitch told the members of Congress Friday, she was deeply shaken. “A person who saw me actually reading the transcript said the color drained from my face,” Yovanovitch said during her five-hour testimony.

But it as not just her personal stakes in the attack that worried her, Yovanovitch testified. She called her removal months earlier “highly irregular” and raised concerns about the message it would send foreign powers: “Our Ukraine policy has been thrown into disarray, and shady interests the world over have learned how little it takes to remove an American ambassador who does not give them what they want,” she told lawmakers. “Such conduct undermines the U.S., exposes our friends, and widens the playing field for autocrats like [Russian] President [Vladimir] Putin.”

Democrats portrayed Yovanovitch’s removal as part of an effort by Trump and Giuliani to get her out of the way so Trump could push for politically expedient investigations into actions by Ukrainian officials during the 2016 U.S. election and former Vice President Joe Biden, Trump’s political rival. Yovanovitch was the first current administration official to agree to appear before the House committees investigating Trump.

Republicans argued during and after the hearing that Yovanovitch had no first hand knowledge of the allegedly impeachable offenses with which Democrats have charged Trump. They pointed out that the President has the authority to choose and replace his ambassadors at will.

Yovanovitch, who had faced repeated public criticism by Trump allies, including his personal lawyer, Rudy Giuliani, said she did not question the President’s power to bring her back to the United States. But she said she didn’t understand why he had to drag her name through the mud while doing so. “I obviously don’t dispute that the president has the right to withdraw an ambassador at any time for any reason,” Yonovovitch said, “but what I do wonder is why it was necessary to smear my reputation falsely.”

Trump’s simulcast continuation of that campaign appears to have backfired, badly. Rep. Adam Schiff, the Chairman of the House Intelligence Committee, asked how Yovanovitch responded to Trump’s singling her out in his morning tweet, Yovanovitch said it was unsettling. “It’s very intimidating,” she said, “The effect is to be intimidating.” That in turn led to accusations that the President was trying to obstruct the inquiry by intimidating witnesses. “We saw today witness intimidation in real time by the President of the United States,” he told reporters during a break in the hearing. “Once again, going after this dedicated and respected career public servant in an effort not just to chill her, but to others who may come forward. We take this kind of witness intimidation and obstruction of inquiry very seriously.”

Asked by reporters in the White House if he thought his tweets about Yovanovitch were intimidating, Trump replied, “I don’t think so at all,” adding that the impeachment proceedings are “a disgrace, and an embarrassment to our nation.” Republicans said Trump was critiquing Yovanovitch’s background and wasn’t trying to send a chill to those who come forward. Trump’s tweet wasn’t an attack, North Carolina Republican Rep. Mark Meadows told reporters, it was a “characterization of her resume.”

White House Press Secretary Stephanie Grisham denied Trump’s message equated to witness intimidation. “It was simply the President’s opinion, which he is entitled to,” she said to reporters.

In the end, an attack from Trump wasn’t the only thing Yovanovitch received Friday. As her testimony came to a close, dozens of people who had packed themselves into the public gallery delivered her a rare standing ovation. “That brave woman and all she’s done, it was for her I was applauding,” says Kathy Benjamin, a former educator from Long Island who identified herself as a Democrat, adding, “You can see how hard it was for her.”

-With reporting by Alana Abramson/Washington 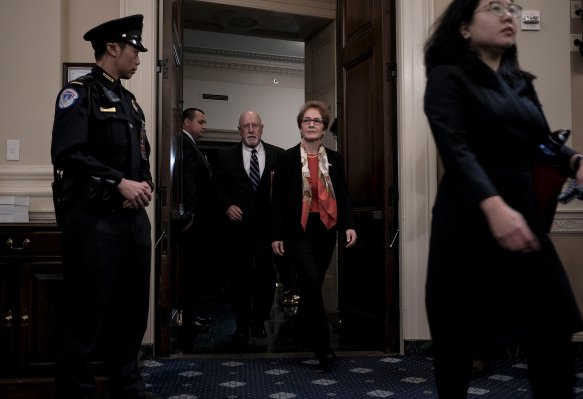