Secretary of State Mike Pompeo has had a reputation in Washington for being careful to stay in President Donald Trump’s good graces while avoiding the public showdowns that have tanked other administration officials’ careers. That may change now that Pompeo’s own legacy is on the line.

Pompeo, who is the first top administration official to receive a Congressional subpoena related to the impeachment inquiry into the President, faced a deadline Friday. House Democrats gave the Secretary of State until Oct. 4 to turn over any documents related to the President’s controversial July 25 call with the president of Ukraine.

Pompeo failed to meet Congress’ Friday deadline, according to an official on the House Foreign Affairs committee, although the official said the State Department contacted the committees and is hopeful for full cooperation. Speaking to reporters in Greece on October, Pompeo said the department would do “all the things required to do by law.” But the request itself has already thrust Pompeo into the center of an escalating national drama—and possibly into the crosshairs of a president who values personal loyalty above all else.

The text messages also appear to show that Pompeo was closely involved in the campaign to use a White House visit—a powerful diplomatic overture desperately sought by Ukrainian officials—as leverage with President Zelenksy.

“Heard from White House – assuming President Z convinces trump he will investigate / ‘get to the bottom of what happened’ in 2016, we will nail down date for visit to Washington,” Volker wrote to Andrey Yermak, a top Ukrainian presidential adviser,on July 25, the day of Trump’s phone call with Zelensky.

Nine days later, the top U.S. diplomat in Ukraine texted the U.S. ambassador to the European Union to express concerns that the U.S. appeared to be withholding security aid on condition of Ukraine aiding the President’s political agenda.

The U.S. ambassador texted back, advising him to bring his concerns “directly” to Pompeo’s office.

After details of the phone call between Trump and Zelenksy became public on September 25, Pompeo initially implied he knew nothing of the call’s contents. On Wednesday, after the Wall Street Journal reported that Pompeo had in fact been on the phone call, the Secretary of State was forced to admit that he had been listening in.

Pompeo has defended the President’s call with Zelenksy, describing it as a legitimate discussion of foreign policy issues and corruption. According to a White House summary of the phone call, the conversation centered on Trump’s request that Zelensky “do us a favor” by investigating theories about the 2016 election. The conversation took place after the U.S. had delayed foreign aid to the country.

Pompeo also criticized Congressional investigators’ requests for more information about the call, saying they “can be understood only as an attempt to intimidate, bully, & treat improperly the distinguished professionals of the Department of State.”

Similar feelings of distrust have permeated the rank and file at the State Department, where many officials expressed chagrin to TIME about Pompeo’s apparent willingness to defend Trump’s alleged use of foreign policy for his own political gain. One State Department official described Pompeo as Trump’s “enabler.”

In addition to Pompeo, several senior State Department officials were listening in to Trump’s call with Zelensky, or later became aware of what had transpired in the conversation, according to the whistleblower complaint, which names several of them. All of those officials are now central witnesses in the Democrats’ impeachment inquiry. Their testimony may illuminate what Pompeo knew about Trump’s plans to ask Zelensky to pursue the investigations.

The first of these witnesses to testify, Kurt Volker, resigned from his State Department position as Special envoy to Ukraine last week. Volker spent nearly ten hours on Thursday behind closed doors with staffers and lawmakers from the three Congressional committees spearheading the impeachment inquiry.

Republicans emerged from the hearing boasting that Volker’s testimony exonerated the President because he did not confirm that the President had demanded the investigations in exchange for security aid. Democrats struck a different tune. “We learned a lot, a lot of details that will advance our investigation,” Rep. Eric Swalwell, a member of the House Intelligence committee, said after Volker’s testimony.

The text messages made public Thursday night appear to suggest that Pompeo was directly knowledgeable of Trump’s efforts to pressure Ukraine to pursue investigations on behalf of the U.S.

“Are we now saying that security assistance and the [White House] meeting are conditioned on investigations?” Bill Taylor, the top U.S. diplomat to Ukraine, texted Gordon Sondland, the U.S. ambassador to the European Union, on September 1. Sondland responded, “Call me.”

Nine days later, Taylor again expressed his concerns to Sondland. “As I said on the phone, I think it’s crazy to withhold security assistance for help with a political campaign,” Taylor said in a text on September 9, calling it his “nightmare scenario.”

Sondland told him to take his concerns to Pompeo’s executive secretary, Lissa Kenna, or “S,” which seems to refer to the Secretary himself.

At a press conference in Rome on Wednesday, Pompeo defended the efforts to push Ukraine to pursue investigations. “Each of the actions that were undertaken by State Department officials was entirely appropriate and consistent with the objective that we’ve had certainly since this new government has come into office,” he said.

As the House Democrats’ investigation intensifies, more than two dozen State, Defense and intelligence officials told TIME they are worried that Trump’s mounting preoccupation with the threat of impeachment has given domestic politics even greater influence over foreign and defense policies. These officials said that on numerous fronts, ranging from nuclear negotiations with North Korea to pro-democracy protests in Hong Kong and relations with allies, Trump has ignored experts in his government, occasionally attacking them both to their faces and behind their backs. They said that Trump was putting foreign policy in the service of his own political agenda.

Many expressed concern over Trump’s decision in May to dismiss the U.S. ambassador to Ukraine, Marie Yovanovitch, because she was allegedly getting in the way of efforts to persuade the Ukrainian government to investigate the Bidens. The Trump administration found her “insufficiently loyal to the President and not committed to carrying out his foreign policy,” a U.S. official familiar with her premature departure told TIME in May. Pompeo supported this dismissal, according to the Wall Street Journal.

Pompeo was pulled further into the fray on October 2, when State Department’s Inspector General Steve Linick provided House Democrats with an envelope the White House had sent him. The envelope contained folders from the Trump hotel filled with interviews that had taken place at Rudy Giuliani’s New York City office regarding the same Ukraine conspiracy theories. Giuliani subsequently confirmed to a CNN reporter that the documents originated with him.

Rep. Jamie Raskin, a Maryland Democrat who attended the meeting with Linick, said he thinks the documents raise questions about Pompeo’s knowledge of Trump’s alleged efforts to pressure Ukraine. “This does not look good for Pompeo,” he told TIME after the briefing.

Raskin’s Democratic colleagues in the Senate expressed similar concerns. On October 3, Sen. Robert Menendez, the top Democrat on the Senate Foreign Relations Committee, wrote for a second time to Linick requesting a formal probe into the State Department’s decision to withhold aid to Ukraine. This time he included a caveat asking for information about Pompeo’s role in the decision.

“Through information you provided to congressional committees and admissions by [Giuliani] it appears that Secretary Pompeo may have inappropriately and unlawfully leveraged State Department resources – paid for by U.S. taxpayers – solely designed to advance President Trump’s personal and political agenda,” Menendez wrote.

As the impeachment inquiry into the alleged politicization of U.S. foreign policy intensifies, many civil servants and Foreign Service officers, some of them in senior roles, are considering leaving the government, according to to multiple officials who spoke to TIME. “I joined the Foreign Service to work for the United States, not for whoever is president, and now politics has become policy,” one State Department official told TIME.

Richard Armitage, who served as deputy Secretary of State under President George W. Bush, said the Ukraine revelations have just fueled the frustration and anger among the U.S. diplomatic corps. The feeling is that Pompeo is allowing State to be used to service Trump’s political agenda.

“The officials at the State Department, starting with the Secretary of State, are there to serve only one purpose,” he told TIME. “And that is the care and feeding of Donald J. Trump.” 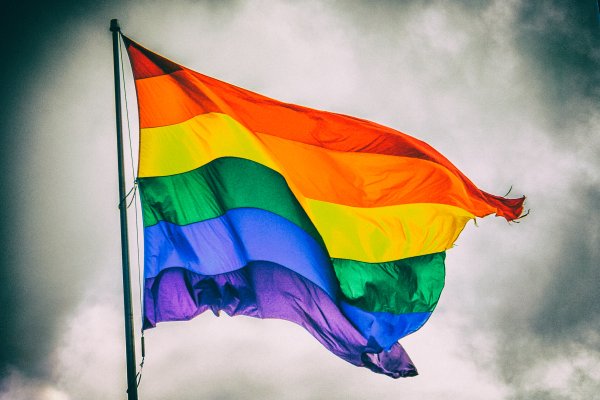 HRC to Fight Trump on LGBT Rights With White-Shoe Law Firms
Next Up: Editor's Pick