The D.C. Lawmaker Going Toe to Toe With Big Vape Never Planned to Be in This Fight

Illinois Rep. Raja Krishnamoorthi before a hearing of the House Permanent Select Committee on Intelligence in Washington, D.C. on Sept. 26, 2019.
ANDREW CABALLERO-REYNOLDS—AFP via Getty Images
By Jamie Ducharme

At a time when Washington, D.C. is paralyzed by partisan gridlock and impeachment hearings, it can be challenging for lawmakers to focus on their day jobs: lawmaking. But Raja Krishnamoorthi, a 46-year-old, second-term Illinois Democratic congressman from the Chicago suburb of Schaumburg, has won bipartisan support for his efforts to curb young people’s use of e-cigarettes, as their surging popularity perpetuates a health crisis among the nation’s youth.

Krishnamoorthi, a father of three and the son of Indian immigrants, twice campaigned on promises to strengthen the middle class and grow the economy. But as teen use of e-cigarettes skyrocketed in recent years, he was confronted with a health problem he found impossible to separate from thoughts of his own family. Kids who vape “look like my children,” he says. It compelled Krishnamoorthi to launch one of the first Congressional investigations into teen vaping and the company most responsible for the surge: Juul Labs.

In July, the House Subcommittee on Economic and Consumer Policy, which Krishnamoorthi chairs, held a high-profile, two-day hearing into Juul’s marketing practices and alleged appeal to children, exposing similarities between historical tobacco advertising and Juul ads, as well as the company’s visits to schools and Native American reservations. The company has since been slapped with a warning letter from the Food and Drug Administration, replaced its CEO, and halted U.S. advertising and sales of flavored products.

His efforts have won important bipartisan support, a feat in this deeply polarized government. In September, he formed an anti-youth vaping caucus with two powerful allies, Democratic Sen. Dick Durbin of Illinois and Republican Rep. Peter King of New York, in hopes of producing bipartisan legislation aimed at curtailing teen vaping. In October, he introduced a bill that would limit the amount of nicotine in vaping products, which he says is crucial to preventing children from getting addicted. “The forces of Big Tobacco and the e-cigarette industry are very powerful. Unfortunately, sometimes it takes a while for people to wake up to just how dangerous some of these products are,” Krishnamoorthi told TIME in September.

The Trump administration threatened to pull all flavored vaping products off the market in the wake of Krishnamoorthi’s hearing, prompting a number of states and cities to pass emergency vaping bans of their own. Last month, the Administration subsequently appeared to change course, announcing plans to raise the minimum age of purchase to 21 over concerns that prohibition will drive the industry underground.

Krishnamoorthi’s mission to take on Big Vape comes as an outbreak of vaping-related lung diseases has swept the U.S., sickening almost 2,300 people across all 50 U.S. states, killing 48 and raising the stakes for lawmakers and regulators. And though illnesses appear to be linked mainly to bootleg THC products, the outbreak thrust the entire e-cigarette industry into the national spotlight after years on the fringes of public discourse.

Vaping advocates who see e-cigarettes as an important tool for adult smokers trying to quit have come out hard against flavored product bans, protesting in droves with chants of “we vape, we vote,” and filing lawsuits to fight state actions. Krishnamoorthi admits he “gets trolled a lot” by those who oppose his suggested vaping regulations. His communications director Wilson Baldwin, who monitors his social media accounts, describes it in more colorful language: “There seem to be a lot of people double-fisting with an e-cigarette in one hand and their phone in the other.”

It could impact the Congressman’s bid for re-election next year. Krishnamoorthi has some job security by virtue of running in a solidly Democratic state—but he’ll be doing so with a Juul-shaped target on his back. In a 2019 poll of about 4,700 adults who report vaping regularly, 83% said they are likely to base their 2020 vote solely on a candidate’s vaping policies, and 96% said they’d be less likely to vote for a candidate who supports a flavor ban. The poll’s organizers—it was commissioned by the trade group Vapor Technology Association (VTA) and conducted by Trump campaign pollsters McLaughlin & Associates—raise concerns about selection bias, but its sentiment was enough to make a flavor ban appear politically risky. Some reports suggest it was even enough to change Trump’s mind about a flavor ban.

Krishnamoorthi’s efforts may have been among the first to pick up the vaping mantle, but his work was informed by the decades-earlier anti-tobacco fight of former Democratic California Rep. Henry Waxman. In 1994, Waxman, then chairman of the Subcommittee on Health and the Environment, convened a hearing that famously prompted seven tobacco executives to claim under oath that nicotine was not addictive. He would go on to draft the landmark 2009 legislation that gave the FDA the ability to regulate tobacco products. Before leaving Congress in 2015, Waxman says he “argued strenuously”—and, ultimately, unsuccessfully—”not to allow [e-cigarettes] to go on the market, and certainly not with flavors.” He says he’s glad Krishnamoorthi is taking up the fight. “Rep. Krishnamoorthi is doing exactly the kind of thing that I would have done his place,” Waxman says. “I commend him for it.”

Others are taking notice of Krishnamoorthi’s work, too. The FDA cited his investigation in its September warning letter to Juul, which directed the company to stop marketing its products as healthier than cigarettes without receiving its authorization to do so. (Representatives for Juul did not provide comment by press time.) He’s also become a regular on networks like CNN and MSNBC, and has received almost $231,000 in campaign contributions from health professionals alone. His total cash on hand tops $6.3 million.

In Krishnamoorthi’s view, the FDA is to blame for keeping vaping on the fringes. Though cigarettes came under FDA purview in 2009, the agency didn’t finalize its regulatory standards for e-cigarettes until 2016, roughly a decade after they began showing up for sale in the U.S. Any brand on the market before 2016, including Juul, had the luxury of flourishing largely without oversight by federal regulators, and without having to apply for FDA approval. (Even now, companies have until May 2020 to apply.) The agency didn’t propose significant action for limiting youth sales until November 2018, by which time 20.8% of high schoolers vaped, according to the National Youth Tobacco Survey. Since then, youth vaping rates have only risen. By latest count, more than 5 million young Americans use e-cigarettes, according to U.S. Centers for Disease Control and Prevention data.

“The FDA overall has unfortunately been kind of AWOL on this issue,” Krishnamoorthi told TIME. His feelings haven’t changed much since. After the administration and the FDA failed to deliver on initial promises to take flavors off the market, Krishnamoorthi held another hearing in December, this one focused on holding his government colleagues accountable. “Time’s up,” he said during the hearing. “[The FDA should] get their act together and put this flavor ban out immediately.” In written testimony, FDA Center for Tobacco Products Director Mitch Zeller emphasized the agency’s commitment to the issue, promising that he and others at the agency are “doing everything we can to prevent kids from using tobacco products and will continue to develop a policy approach that aligns with that concern.”

Krishnamoorthi’s efforts are directed at preventing youth use and addiction, and he doesn’t give much thought to whether adults should use e-cigarettes. That’s a complicated question on which even public-health experts can’t find consensus. Some argue e-cigarettes are a life-saving alternative to cigarettes; others think they do little to help smokers quit, and introduce new and different health risks. “I don’t know about the broader issue of whether adults should be vaping,” Krishnamoorthi says. “But this we’re sure about: youth should not be vaping, and we’ve got to stop it right now.”

The vaping industry has come out swinging. Tony Abboud, executive director of VTA, argues that raising the legal age for purchasing vaping products would work better to curb youth use than banning flavors. “Banning flavors fails to seriously address the issue of youth vaping while likely precipitating a public health crisis as vapor products users turn to either combustible cigarettes or to black market sources for vapor products,” Abboud says. Paul Blair, director of strategic initiatives at the conservative, pro-vaping group Americans for Tax Reform, calls Krishnamoorthi’s efforts a “moral crusade” that will make it harder for adult smokers to access products that could feasibly help them quit. “If a number of progressives in Congress get their way, Marlboros will be among the only choices for adults in convenience stores,” Blair says. “Is that really what they want?”

Krishnamoorthi landed in Illinois by chance. When his parents first emigrated from India in 1973 along with then three-month-old Raja, they settled in Buffalo, N.Y., where his engineer father was to complete his studies, and got by with the help of public housing and food stamps. Eventually, Krishnamoorthi’s father landed a job in Peoria, Ill., where Krishnamoorthi lived before attending Princeton University to study engineering, at the urging of his father. “He said, ‘Raja, you can do anything you want to do in life: you can be a civil engineer, a mechanical engineer, an electrical engineer, a computer engineer—or a doctor,’” Krishnamoorthi laughs.

Krishnamoorthi took to his engineering coursework well, and thrived at Princeton. “I got a B.S. in engineering, and I like to joke that I do the B.S. part now,” he says. (Krishnamoorthi is full of well-worn dad jokes like this one.) When he graduated in 1995, “everyone in the world wanted to be in consulting,” and Krishnamoorthi was no different. But his heart was in public policy, so he consulted just long enough to save up for law school at Harvard. After graduating, he moved to Chicago to clerk for a federal judge, and eventually joined a law firm. He met his now-wife, anesthesiologist Dr. Priya Bala, on a blind date in 2001.

After graduating from Princeton and Harvard Law, Krishnamoorthi first tried his hand at public service when he was appointed Illinois’ special assistant attorney general in 2006. After a brief return to the private sector and two failed campaigns (for the role of Illinois’ comptroller in 2010, and for Congress in 2012), he ran in 2016 to represent the state’s 8th District in Congress. He won by 17 percentage points, with an endorsement from then-President Barack Obama, for whom Krishnamoorthi campaigned in 2004 and 2008. With his victory, Krishnamoorthi became Illinois’ first Indian-American representative.

When he ran for Congress, Krishnamoorthi talked often about his intention to protect social services and small businesses, and once there he joined high-profile groups like the House Intelligence Committee. Public health was a less obvious—but not totally unexpected—focus. His parents grew up at a time when health problems caused by chewing tobacco were rampant in India, leading “a whole generation of Indian-origin people…to hate smoking,” he says. “Some of that, also, is part of my own DNA.”

Now that he’s a father himself, he says that call is stronger than ever—and one that he wants everyone to hear. “ Protecting our kids cannot be a partisan issue,” he says. “It’s got to be something that is top of mind for all of us.” 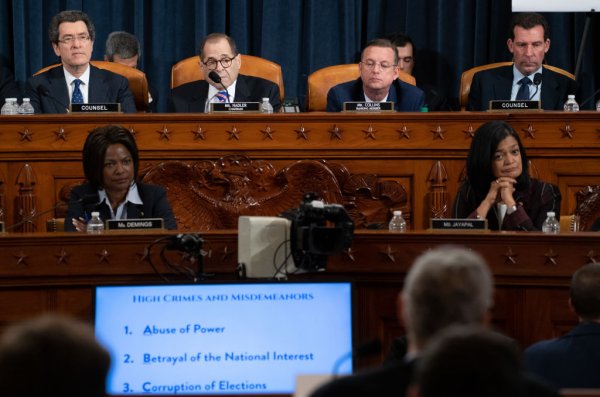 Dems Weigh Obstruction in Impeachment Hearing
Next Up: Editor's Pick