The 2010s will likely be known for how music consumption was transformed—bye bye, poorly tagged MP3s, hello streaming-service exclusives. But that change was accompanied by boundary-breaking pop music from big-name stars and up-from-SoundCloud hopefuls alike.

Songs about love gone wrong remained a pop staple in the 2010s: All the decade’s technological advances didn’t do much for romance, when all was said and done. The lead single from Adele’s blockbuster second album 21 was a four-minute primal scream shaped into a rolling-thunder epic, with the British belter’s formidable alto making every charge against her ex—abandonment, manipulation, just being a generally bad guy—add up until they were as high as a funeral pyre. It’s an exercise in pop catharsis that doubles as an exorcism for the demons that lurk after an affair flames out.

Since her days as a teen pop protégé of Max Martin, Robyn has been one of pop’s singular figures, veering in her own direction in ways that the masses would eventually follow. 2010’s heartbroken “Dancing on My Own” is part mini-movie, part power ballad, and all feeling. Her to-the-bone descriptions of watching her love interest kiss another are searing yet glum, with the energy they conjure channeled into punching-bag drum programming that shrouds her pain in a cleansing fire.

Sky Ferreira, “Everything Is Embarrassing” (2012)

A slow burner with the glossy synths of late-’80s sophistipop and the furtively wounded vocals of late-’90s alt-rock, Sky Ferreira’s sulky 2012 single “Everything Is Embarrassing” was a throwback that represented pop’s next wave. Artists like Ferreira, Charli XCX, and Haim all operated in a way that was parallel to the charts, exploring how they could take the verse-chorus-verse ideal to 21st-century realms. “Everything Is Embarrassing” evokes the full-body cringe that’s often felt when taking an emotional risk, its plush arrangement providing the comfort for any agonies that might follow.

New Orleans-born singer-songwriter Luke James’ charm and chops helped his acting forays, including his turn as Johnny Gill in BET’s The New Edition Story and his comedic cameo in 2019’s Little, a name with audiences. His soulful, bursting-with-energy voice established him as one of R&B’s leading vocalists, and this 2012 mash note is a shining example of why. A heart-eyed emoji set to music, “I Want You” takes the love song to church—and thanks to James’ skyscraping falsetto and utter gusto, he makes romance seem like the most holy quest.

Taylor Swift’s 2010s were filled with stadium-sized spectacles that cemented her status as one of the world’s biggest pop stars. This track off 2012’s Red is proof that she became one of music’s grande dames because of her ability to crystallize emotional details. A midtempo guitar ballad with quietly devastating lyrics, “All Too Well” nods to her country-prodigy past, but with the sort of maturity that transforms even the most dramatic moments of one’s life fade into shades of gray.

The opening of this 2013 single by Brooklyn trio Hospitality is all about crispness. Its piston-precision guitar riffs and the clipped delivery of vocalist Amber Papini turn her requests to a long-gone lover—”Take me on a plane tonight,” “Tell me not to leave and cry”—into desperate commands. As her sense of longing reaches a fever pitch, the band leans on an incipient groove and a full-on indie-psych coda breaks out, complete with sputtering guitar solo—so when the song finally whirls to a halt, it evokes the tail end of a crying jag that can only be stopped by a sudden, deep sleep.

Tennessee emo-pop band Paramore rebooted itself with its 2013 self-titled album, bringing programmed drums and glossy strings into its high-energy guitar-bass-drums mix. It worked like a charm, with vocalist Hayley Williams sounding newly energized by the possibilities of her band’s bigger sound. On “Ain’t It Fun,” she uses that expanded palette—and a feisty gospel choir—to whoop and holler her way through the gnarlier bits of growing up.

The title of “Drunk On A Plane” hints at a cautionary tale about the dangers of open-bar flying, but country wanderer Dierks Bentley’s songwriting skill turns this 2014 singalong into an affecting tale about being stuck with the fallout from a love gone wrong. Bentley’s narrator has nonrefundable tickets to his now-canceled Cancún honeymoon, so he decides to take the flight; along the way, he reflects on how he arrived in seat 7A. It’s a good-humored update of Nashville’s drinking-song template, and Bentley’s skilled songwriting makes plain the pathos behind every whiskey-and-Coke order.

Flipping the “millennials are killing [x]” trend-piece construct on its head with a smirk and some desert-heat synths, this 2017 single by Houston-based pop prodigy Khalid is an anti-anthem for “young, dumb, broke high school kids.” Its sing-song topline eases it into even the most overstimulated listeners’ minds, but its simmering anxiety about life’s big questions helps it resonate beyond its fade-out.

2019’s biggest pop sensation didn’t get there because of TikTok, or the yeehaw movement, or controversies over chart placements. Lil Nas X’s sparse smash—based off a Nine Inch Nails flip sourced from YouTube—gained momentum steadily, then unstoppably, because it’s so much fun to consume, whether in its original barely-two-minutes form, as one of its star-studded remixes, or merely mimicking the hook while around friends. It’s a freshly minted building block for pop, allowing listeners to hear the potential in country, trap, country-trap, and any other hybrid genre that might come to life in the streaming age. 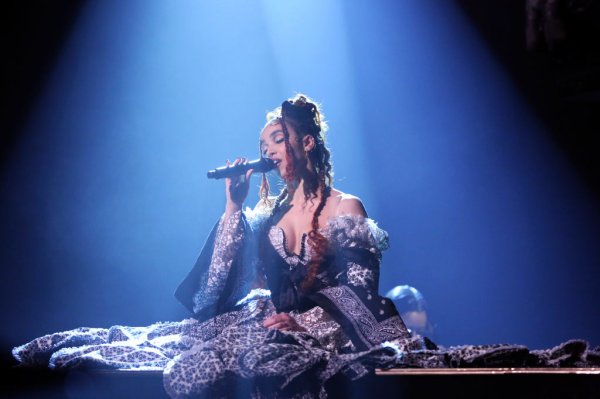