Willem Dafoe on The Lighthouse, Inspired Directors, and What He Cherishes in New York City

Willem Dafoe–a man who has played a Spider-Man villain, Vincent van Gogh and Jesus–is charming even before you meet him. In advance of our interview, it was suggested that we meet in Abingdon Square Park, a small triangle of green space in New York’s West Village. He’s not in New York often, and walking around the park and the city is something he truly cherishes about it.

The idea of cherishing anything seems almost quaintly Victorian in an age when we spend more time staring at the mini computers we keep in our pockets than looking at the world around us. But having a walk in the park–or even just sitting on a bench for an hour, with the sounds of city alive all around–is just one of the ways Dafoe lives in the moment. It’s also part of the joyful discipline he brings to his work, a vocation he’s been building upon since he helped start an experimental-theater company, the Wooster Group, in the 1970s. “The job is always different, and you’re always calibrating in relationship to the people, to how you’re feeling. It’s for that reason that I’ll never tire of performing,” Dafoe says, once we’ve settled onto our park bench. “People say, ‘Don’t you want to direct?’ It’s like, Hell no! Because I’m not through with that performance stuff.”

Dafoe has some 120 film credits to his name, and the number grows every year. And if you try to draw any sort of thematic thread from one role to the next–good luck. Dafoe has worked with big-name directors, like Martin Scorsese, and on big-budget pictures, like last year’s Aquaman. But he also works frequently with cult filmmaker Abel Ferrara, and he seeks out emerging directors too: that’s how he found his way to The Lighthouse, a mystical thriller by Robert Eggers (director of the 2015 indie-horror hit The Witch), one of two movies featuring Dafoe being released this autumn. In the other, Edward Norton’s Motherless Brooklyn–adapted from Jonathan Lethem’s innovative 1999 detective novel–he plays the retreating sibling of a big New York power broker, a figure who represents the supremacy of love over ambition. The point, maybe, is that Dafoe chooses roles based on what’s interesting to him–and what’s interesting to him is impossible to strictly define, perhaps because he’s always chasing after what he doesn’t know. He revels in helping create something new.

“If you’re going to make something, make something that doesn’t point to anything,” he says. “I’m attracted to people who are self-starters. Ferrara is a big self-starter. He gets no help, he makes his stuff out of nothing, so you really feel contact with making something. There’s no buffer. You feel that every inch of the way, and that’s a nice feeling. When you’re really in the process, you don’t worry about anything. You don’t worry about money, about the reception–any of that stuff. I don’t, as an actor. I’m happy, I got my plate full, I’m chewing away, and I feel alive.”

That helps explain why every Dafoe performance, even the smallest one, is its own discrete, original entity. When you consider how distinctive his face is, it’s astonishing that he has melted so gracefully into so many roles. His cheekbones, Adonis-like when he was younger, have been chiseled further over the years, like a rock formation that’s welcomed whatever wind and rain nature can dish out. (He’s now 64.) He’s got the gloriously imperfect teeth of a theater actor rather than a movie star. You notice them especially when he laughs, which is often. He cackled when he forced me to admit, after a few seconds of stammering, that I admired The Lighthouse more than I actively liked it: “You didn’t dig it! You didn’t dig it!”

He found this hilarious, but he also accepted my explanation of how much I enjoyed the performances: Dafoe plays a crusty, flatulent New England lighthouse keeper, breaking in newbie Robert Pattinson. He was drawn, he says, to the specificity of Eggers’ script and his vision. “On one level, it’s a very simple story: two guys, trapped in a lighthouse, they run out of food, they start to drink, they go crazy, they get aggressive with each other. The end. But it’s also about identity, it’s about belief. So I think it has deep roots. They’re articulated in the images and in the actions, which are very specific. I just find it really beautiful.”

Dafoe was born in Appleton, Wis., and moved to New York in the mid-1970s. His first film job was in Michael Cimino’s 1980 Heaven’s Gate, though Cimino fired him for laughing at a crew member’s joke on set–but if you’re going to be fired by a finicky auteur, you may as well go out chuckling. Dafoe earned a Best Supporting Actor Academy Award nomination for one of his first breakthrough roles, in Oliver Stone’s 1986 Platoon, and has been nominated three times since: in 2001, for E. Elias Merhige’s Shadow of the Vampire; in 2018, for his supporting role in Sean Baker’s The Florida Project; and in 2019, for his Van Gogh, in Julian Schnabel’s At Eternity’s Gate.

Dafoe has been working for so long, and has earned so much respect along the way, that he can afford to follow his heart, and his instincts. He’s happiest when he’s working with people who, like Ferrara, Eggers and Motherless Brooklyn’s Norton, need to make something, as opposed to directors who are simply being paid to do it. “There’s more possibility. They have to make this thing, they have to find something out. I think that inquiry, using film to find that thing that they need, is real contact. And I think that’s the heart of great movies.” The key word here is movies, because Dafoe has done very little work in television and confesses a preference for the former–though he’s also quick to add, “Believe me, if I could only find work in TV, I’d be right there. I’m not a snob.”

That goes without saying, especially when Dafoe admits, a beat later, that as much as he believes movies ought to be watched on the big screen, he, like just about everyone else, sometimes catches up with them on airplanes. He works so much that he spends plenty of time on them: he’ll go where the work takes him, and the locales aren’t always glamorous. The Lighthouse was filmed on a rocky peninsula in Nova Scotia, a stand-in for New England, and the shoot was demanding. “When it whipped up, the wind was so strong that someone my size could get blown into the water–off the land, into the water.”

Dafoe could be on easy street, if he wanted it. Why subject himself to weeks of shooting on a peninsula in Nova Scotia? He answers the question as you’d expect him to. “But I love it! Not because I’m a masochist–I’m not. For me it’s all about waking up, all about beating the lockstep. Not just changing things up for the sheer sake of variety. But really, do things that don’t let you decide definitively who you are and the way things are.”

So much of what we do, Dafoe says, is predicated on an idea of ourselves that we’re trying to protect. And when you’re an actor, you have a public face as well. If he’s serious about being an actor, he seems even more serious about just being a person, which is, perhaps, why he has such a particular fondness for just walking around New York, even the New York of today, which he recognizes is highly gentrified. He tells a story about a woman who recently approached him for a selfie. “She came up to me and she said, ‘Hey, how are you? We took a picture 10 years ago together and I had no hair because I had cancer. And shortly after that I started getting better, and I was free of cancer. And just recently, I found out it’s back. Can we take a picture?'”

Dafoe, of course, said yes. “To be involved with people intimately that way is strange. And it’s sort of powerful. I don’t think it’s an egotistical thing. You just feel the reach of what you do. Because they don’t know me–it’s not about me. But that woman is a stranger that I have a relationship to. I don’t want to overstate that–but it’s interesting, no?” It couldn’t have happened if Dafoe hadn’t been walking around, present in all ways, cherishing a city he doesn’t get to spend enough time in. 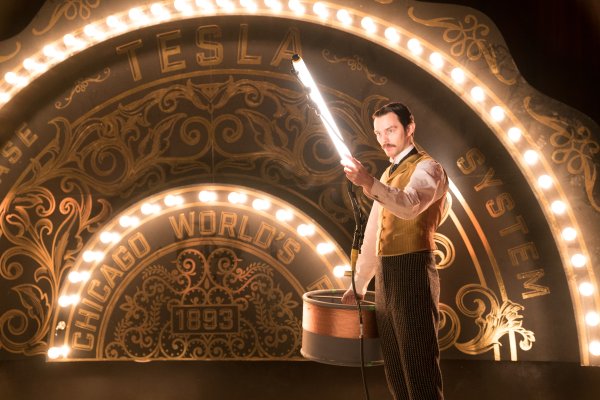 The Real History Behind 'The Current War'
Next Up: Editor's Pick