The Saturday-afternoon-serial spirit is almost totally gone from movies. We have plenty of movies based on comic books, but very few that are in touch with those comics’ pulp roots. Most of the pictures in both the Marvel and D.C. universes are extravagant without being imaginative: The climactic battles may seem big while you’re watching them, but their memory withers five minutes later. Huge budgets and splashy marketing don’t constitute a soul. With few exceptions—the visual fantasia that is Black Panther, for example—there’s so little romance, charm or craziness in any of these movies.

Jason Momoa plays the lumberjacky heavy-metal partier who is actually half sea-person: His mother, Atlanna (Nicole Kidman), queen of Atlantis, washed up onshore one day with near-fatal wounds; for the mortal lighthouse keeper who found her, Tom Curry (Temuera Morrison), it was love at first sight, and little Arthur, the tyke who would later become Aquaman, showed up not much later. Aquaman is the story of a lost mom, a righteous guy who’s an awesome swimmer, and the battle for an underwater kingdom led by a pissy potentate, Arthur’s half-brother, King Orm (played by a scowling, virtually eyebrowless Patrick Wilson).

Orm is the current ruler of Atlantis, but he’s not happy to stop there: He wants to be Ocean Master, lord of the undersea kingdoms, of which there are seven. He’s also fuming at the humans of the surface world for dumping their garbage in the deep, and he wants to wage war on them, too—for that, you can’t blame him. It’s Arthur/Aquaman’s job to get Orm to cool his jetskis, which he does with the help of the lovely and smart Princess Mera (Amber Heard) and his old teacher Vulko, who taught him some smooth trident moves back in the day. (Vulko is played by Willem Dafoe, looking sleek in his greenish-black underwater turtleneck.)

That’s the basic plot, but who cares, really? And when you’ve seen one underwater warfare sequence, you’ve seen them all. The climactic one in Aquaman is really just business as usual, but with more interesting-looking steeds: Some are oversized seahorse-type critters; others are armored sharks outfitted with saddles.

But Aquaman isn’t all dumb fighting and arguing among sea-guys. The movie’s biggest selling points are its affable, bear-hug spirit and its lavish, loopy visuals. The director is James Wan, who made the first Saw movie, as well as Insidious, The Conjuring and Furious 7. He approaches this DC Comics-based material with both a sense of humor and a sense of adventure: It has something of a Flash Gordon vibe (even if it isn’t nearly as much fun as the 1980 Mike Hodges film of that name, because few things in life are). The underwater city of Atlantis is a futuristic metropolis dotted with giant, purplish structures that look like Art Nouveau jellyfish. The jellyfish theme is repeated on one of Mera’s ceremonial gowns: Its collar is trimmed all the way around with the squiggling, glowing creatures, like psychedelic ermine. And Momoa, who emerges from the drink with his damp ringletty waves just brushing his brawny, tattooed shoulders, as if he’d just stepped out of a DevaCurl salon, has a gentle-giant heartiness: You can see why he’d be the go-to guy for anyone with undersea problems.

But the best thing about Aquaman is its goofily sweet framing device, which tells the story of how Kidman’s Atlanna and Morrison’s Tom meet, fall in love, have a child and become forced to part. Kidman, svelte in her queen-of-the-deep wetsuit, is a delight here. Her Atlanna is suitably regal, but you can also see how easily she’d adjust to the jeans-and-T-shirt life on a lighthouse island. Wan frames the couple’s love scenes with understated tenderness; it actually hurts a little when they’re torn apart. But Atlanna really belongs to the sea, and Kidman, whose skin seems to be brushed with the same light that gives bioluminescent phytoplankton their glow, makes you believe it. In its best moments, Aquaman is transportive. There are worse ways to spend a Saturday afternoon. 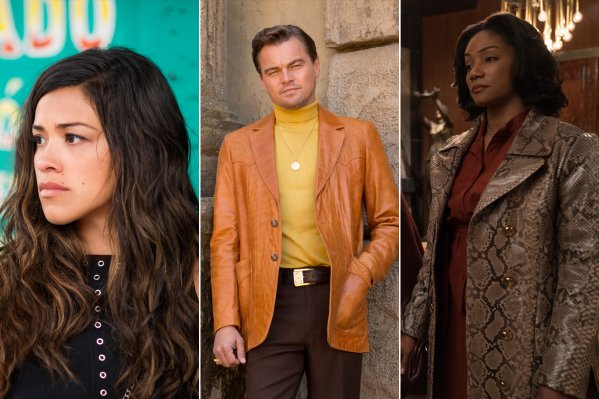 Here Are the Best New Movies Coming Out in 2019
Next Up: Editor's Pick