At Eternity’s Gate tells the story of Vincent van Gogh’s final years in the south of France leading up to his death. While based on known details of the artist’s biography, director Julian Schnabel filled in the details to draw an even richer portrait of the artist’s life. As TIME movie critic Stephanie Zacharek puts it: “Schnabel riffs on what we know and speculates about much we don’t, imagining what it was like to see through Van Gogh’s eyes and to live in his skin.”

The film is more “impressionist portrait,” as star Willem Dafoe described it, than straight-up biopic. In January 2019, Dafoe was nominated for an Oscar for Best Actor for his performance. Here’s what’s true and what’s fiction in At Eternity’s Gate.

Van Gogh was much younger than Dafoe

At Eternity’s Gate presents a Van Gogh who was much older than the real artist. Dafoe, who portrays him in the film, is 63 years old. Van Gogh however, died at 37.

Although Van Gogh was financially reliant on his brother Theo, he did make some money selling his own work

Theo van Gogh was an incredibly important figure to his older brother, providing a great deal of emotional and financial support to Vincent, giving him a weekly envelope of money and acting as his art dealer. However, the myth that Van Gogh only ever sold one painting in his lifetime isn’t true. While his art didn’t equip him with the resources to be financially independent, he did sell work here and there throughout his life. According to the Van Gogh Museum, the exact number of work Van Gogh sold is not known—but between a paintings, commissions and drawings: “It was more than a couple.”

There remains no consensus as to what illness Van Gogh suffered from, but as depicted in the film, his mental state greatly deteriorated during his time in Arles. Beginning with the infamous incident in which he cut off one of his ears, triggered by a row with Paul Gauguin, Van Gogh was prone to periodic breakdowns, during which he would dissociate from reality. At Eternity’s Gate sticks true to the details regarding his continued hospitalization during the last years of his life.

The film focuses closely on the negative responses to Van Gogh’s work, and how the people surrounding him didn’t understand him. In truth, Van Gogh was far from an outcast in Parisian art circles, and kept up vigorous correspondence with several of his peers throughout his time in Arles. Other than Gauguin, Van Gogh was close with Paul Signac and Emile Bernard, among others. He also received more than one favorable review in his lifetime, and had several works shown at a prestigious salons in Paris and Brussels.

By accounts, Van Gogh shot himself, and was not murdered by two boys

The most apocryphal detail in the movie surrounds the circumstances of Van Gogh’s death. The movie portrays that he was hit by a stray bullet fired by two young boys playing with a gun. To historical scholars, the accepted consensus is that Van Gogh shot himself in the chest. Since nobody witnessed the act, this outcome could certainly be in the realm of possibility, but as it stands, Van Gogh’s suicide has been met with little skepticism. 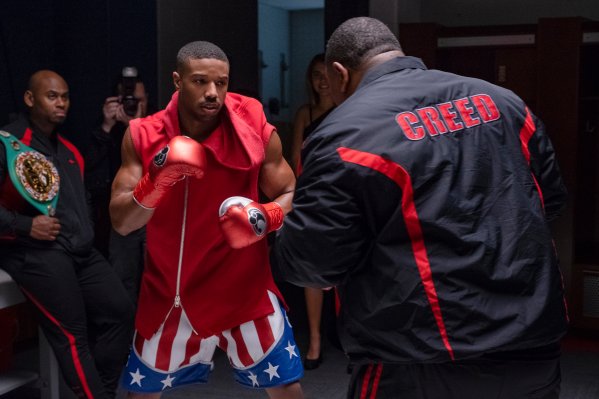 Review: Creed II Gets the Job Done—But Can't KO the Memory of Its Predecessor
Next Up: Editor's Pick