This Is the Definitive Ranking of Every Single Spider-Man Movie

Before The Dark Knight, The Avengers and Wonder Woman, there was Spider-Man. Sam Raimi’s 2002 film about an anxious teen who gets bit by a radioactive spider helped launch the superhero-saturated era we live in today. For whatever reason, we just can’t seem to let go of that kid from Queens. Over the past 15 years, audiences have been treated to nine different Spider-Man productions: seven live-action films starring three different actors as Peter Parker, one animated film and one ill-fated musical.

Spider-Man has always been the most relatable superhero. He’s not a genius (The Hulk) or a billionaire (Iron Man) or a god (Thor). He’s a high schooler who can’t seem to finish his homework before swinging off to stop the latest bad guy who decided to use sketchy technology to destroy the world, all while dressed up in a whimsical costume (a goblin, a lizard, a vulture). Some of Hollywood’s biggest stars — Kirsten Dunst, James Franco, Emma Stone — got their starts in these blockbuster films.

Tom Holland is the latest actor to launch a career with a Spider-Man movie. In his first few films, Holland’s Peter is less anxious and more awkward than the previous two Peters. But all three versions are united by a sweetness and basic sense of decency that’s rare in superheroes. But which Spidey reigns supreme? We ranked all the Spider-Man films — and that one doomed stage production — from worst to best. Here’s how the latest entry in the series, Spider-Man: No Way Home, stacks up.

Marc Webb’s sequel to his reboot of the Spider-Man series wasted much of the goodwill he built up in the strong first film. A promise by Peter Parker to Gwen Stacey’s father to keep her away from bad guys leaves the movie’s best asset, a wry Emma Stone, on the sidelines for most of the film. Jamie Foxx becomes unrecognizable once he glows blue with evil powers. Paul Giamatti shows up far too late in the movie’s run as a rhino. And the new Norman and Harry Osborn, played by Chris Cooper and Dane DeHaan, hardly compare to earlier versions played by Willem Dafoe and James Franco.

And yes, there are four villains in this film, which is three too many. “For at least this installment, Spider-Man is amazing no more,” wrote TIME movie critic Richard Corliss.

Still, Corliss had a soft spot for the film. “To place a sensitive story in a male-epic genre — to dramatize feelings of angst and personal betrayal worthy of an Ingmar Bergman film, and then to dress them up in gaudy comic-book colors — is to pull off a smartly subversive drag show,” he wrote. And this was before we’d reached peak superhero. Spider-Man 3 stands out from contemporary superhero films like Guardians of the Galaxy 2 or Suicide Squad simply for its willingness to feel, not fight.

Amazing Spider-Man‘s main problem is that it hit theaters a mere five years after the last Raimi film, and little changed between the two versions. Sure, Marc Webb subbed out Mary Jane for an earlier Peter Parker flame, Gwen Stacey. But the audience had to suffer through Uncle Ben dying again. And the added mystery of “What happened to Peter’s parents” only served to tax the tear ducts of the characters as much as those in the Raimi films.

Still, Andrew Garfield’s efforts to spin his own web often succeeded: He was quippier and more seductive than Maguire, and his charm buoyed the film. The movie even matched the famous Spidey-MJ kiss with its own version, Peter spinning a web around Gwen’s hips to pull her into him for their first smooch. TIME reviewer Mary Pols cited the then-real-life-couple as the highlight of the movie: “Garfield and Stone have serious chemistry…I look forward to seeing more of them together, and I suspect audiences will too.”

Spider-Man: Far From Home could have been just a serviceable entry in the ever-expanding Marvel Cinematic Universe: Heaven knows this movie name drops Iron Man probably more than Spidey himself as Peter struggles with how to cope with losing (another) father figure after the events of Avengers: Endgame. But the one upside of so many superheroes flooding our theaters is that the writers feel free to play with the formula a bit. The villain in this movie reveals a particularly meta plot to exploit the world’s obsession with superheroes and gullibility concerning their powers. Marvel is so powerful right now that they can actually make fun of their audience for loving their movies, during their movies.

But really it’s the actors, not their characters’ machinations, that elevate this movie on the list. Jake Gyllenhaal has leading-man looks and almost played Spider-Man himself once upon a time, but he has thrived in recent years when playing deranged weird guys in movies like Nightcrawler, Okja and Velvet Buzzsaw. He taps into those instincts here, to delightful ends. And Zendaya gets a thankfully beefed-up part in this second film as Peter’s love interest, MJ.

The latest reboot of the Spider-Man franchise starring Tom Holland is a “homecoming” to the original comic book conceit that Peter Parker is just a stressed-out teen. Firmly planted in high school (this Peter is just 15 years old), Holland’s Spider-Man is a wisecracking kid who still has plenty of tricks to learn from his mentor Iron Man.

Though the film is chock-full of references to the Marvel Cinematic Universe — Homecoming is the first collaboration between Sony and Marvel Studios since Sony bought the rights to Spider-Man from Marvel back in the 1990s — it smartly skips over Peter’s much-told origin story. The result is something lighter and funnier than the dour superhero movies of late. Indeed, it’s the lightest Spider-Man to hit the big screen.

“It’s a relief to see a superhero engaged in deeply human activities, like getting ready for a date with a girl he really likes,” writes TIME’s critic, Stephanie Zacharek. “This Spider-Man is still just a kid, after all, and he has no energy for existential angst — just dealing with hormones is enough.

A more mature film than its Disney-fied predecessors, the third and final installment in Holland’s Homecoming trilogy sees our hero, once surrounded by friends and fellow Avengers, confronting the loneliness of being a superhero and the pain of failing those you love. Those lessons are necessary for Peter’s heroic arc, and No Way Home manages to find a new and often moving way to show Peter’s transformation from teen to adult.

This multiversal movie offers plenty of delights in the form of surprise cameos from past Spider-Man franchises, but it also gets occasionally bogged down in the Marvel-ness of it all. It revels in its fan service at the expense of quieter moments when Holland’s Spider-Man might have reflected upon the tectonic shifts taking place in his life. But the ending of Spider-Man: No Way Home—which we won’t spoil—left us excited for the next chapter in Peter’s adventure.

The original Spider-Man, which starred Tobey Maguire, Kirsten Dunst and James Franco, helped launch the modern superhero era. Equal parts muscles and malaise, Maguire’s Peter Parker perfectly embodied the overwhelmed teen. The movie set the stage for a bildungsroman that would bloom over the course of three films. It also offered up the best superhero villains to hit the silver screen, Willem Dafoe’s cackling Goblin, and one of the most famous kisses in cinematic history.

TIME’s film critic Richard Corliss predicted that the franchise would turn into a hit. “In emphasizing angst over energy, the movie is much like its hero — not the dashing crime fighter in a red-and-black bodysuit but the introspective nerd who both endears and exasperates,” he wrote. “Why shouldn’t there be growing pains in the Spider–Man movie? Just as Peter’s transformation is a process of trial and error, so the series may be able to mature in the planned sequels.”

Heralded as one of the best superhero movies ever made, Sam Raimi’s second Spider-Man movie focused on the human behind the mask. Spider-Man 2 strikes a balance between the teen angst of the first film and impressive special effects, with one question driving the drama: what if Peter Parker doesn’t want the great Spidey powers, or the great responsibility that comes with it?

Doc Oc (Alfred Molina) doesn’t quite measure up to the Goblin, but the rest of the plot more than compensates for Dafoe’s absence. Spider-Man 2 was the rare action film with whip-smart dialogue, likely thanks to novelist and comic book lover Michael Chabon, who helped write the film. Though TIME did not review Spider-Man 2, Roger Ebert only had nice things to say at the time: “Now this is what a superhero movie should be.”

Miles Morales is voiced by Shameik Moore in "Spider-Man: Into the Spider-Verse"
Sony

Chris Miller and Phil Lord, the braintrust behind The Lego Movie and 21 Jump Street, produced a delightfully irreverent movie. For once, the spider’s victim wasn’t Peter Parker but instead Miles Morales, a half-black, half-Hispanic teen living in Brooklyn (voiced by Shameik Moore). Once Miles is bit, the way he sees the world changes—literally. Suddenly he starts thinking in comic-styled text boxes. Wiggly lines emerge from his head when his Spidey senses engage.

Those senses help him detect other Spider-people, which is lucky because once the villain rips a hole in the space-time continuum, several other Spideys come flooding into Miles’ universe. Among Miles’ mentors are a 40-year-old Peter Parker described by Miles a “janky, old, broke hobo Spider-Man,” and Peter Porker, a.k.a. Spider-Ham.As the first mainstream film to introduce the concept of the multiverse into modern superhero filmmaking, Spider-verse is quickly becoming one of the most influential films of all time.

But Spider-verse ranks #1 because the Oscar-winnning movie’s visual and storytelling innovations reinvigorated a tired genre and set a new bar for future superhero films and promised a future where someone other than Peter Parker wears the mask. 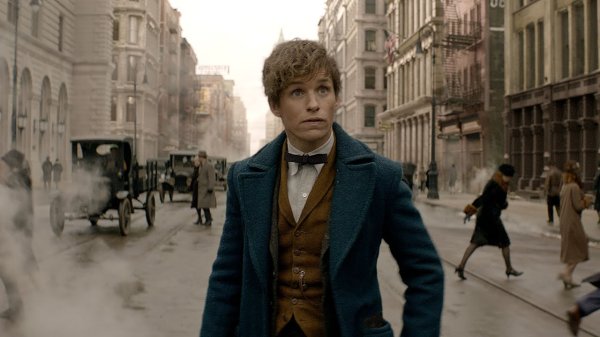 Cast and Plot Details For 'Fantastic Beasts' Sequel Revealed
Next Up: Editor's Pick