Back in the Day, Jessica Biel Was No Fan of Her Future Husband's Boy Band NSYNC as Jimmy Fallon Reveals

Jessica Biel and Justin Timberlake have been married for seven years now. But there was a time when Biel wouldn’t even give the nascent boy bander the time of day, as she admitted to Jimmy Fallon during an appearance on his Tonight Show this week.

After reminiscing about their wedding, Fallon reminded Biel that there was a time she wasn’t a big NSYNC fan. (Don’t worry: she wasn’t into the Backstreet Boys either, so it wasn’t a rival boy band kind of thing.) Instead, she was a big fan of things like musicals, telling Fallon she knew every word to Rent. “I, like, lived under a rock,” she recalled.

But of course Fallon couldn’t let that lie. He unearthed footage of Biel from a 1999 interview in which she’s asked about her interest in NSYNC. “To be honest, I don’t listen… I know of them, of course,” she shrugged. “I’m not a huge fan. But, I mean, cool I guess.” It’s the most nonchalant and unbothered of rejections of one of the biggest pop culture phenomenons of the late ’90s.

Ironically, of course, Biel would meet Timberlake a few years later and by 2012 they would be married. (They now share one four-year-old child together too, Silas.) So it all worked out for Timberlake in the end — even if it wasn’t his NSYNC fame that necessarily gave him his shot at happily ever after with Biel.

But did she come around to their music eventually? According to her story to Fallon, she’s pretty much just as indifferent as ever. Seems like some professional distance might be the key to their longevity. 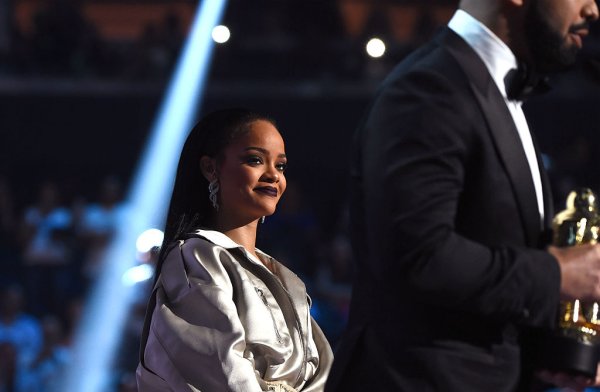 Connoisseur of Life Itself Rihanna Enjoyed McDonald's at the Club for Drake's Birthday
Next Up: Editor's Pick