Allen, Texas is a long way from the Coney Island boardwalk, but it became the site of one of the biggest eating contests around thanks to a very determined teenager. The one-man burger extravaganza took place at a Whataburger outpost on Stacy Road in Allen, Texas, but the world was able to watch thanks to a video shot by Blake Reynolds, who shared it on TikTok.

The well-crafted video (seriously, is the kid studying film editing?) starts with a close-up of a Whatburger receipt revealing that someone had boldly placed an order for a burger made with ten beef patties, five slices of cheese, and “plain” and “dry” a.k.a. without toppings or condiments. It then cuts to a teenager named Ethan Mueller going in on the gargantuan burger with an excited crowd cheering him on. A helpful man leans across the table and wipes Mueller’s mouth with a napkin before leaning back to witness the spectacle.

As Mueller continues the feast, it seems that the entire Whataburger—including the workers—are cheering him on and the crowd starts chanting “Ethan! Ethan!” as he mows down the giant burger, washing down bites with an equally large soda. Twenty minutes later, Mueller was done and the ten-patty monstrosity had vanished.

Unfortunately, that wasn’t the last time the burger was scene. While it blessedly wasn’t captured on video, Reynolds told Mashable that the burger made a repeat appearance later, but that reportedly will not stop Mueller from wanting to try to beat his own record. TIME reached out to Whataburger for the official statistics about the burger patty-eating record, but they could not confirm that Mueller’s burger broke any official records, although they were duly impressed with the feat. “Not all heroes wear capes; not all heroes go TikTok viral,” Pam Cox, Vice President, Human Resources & Brand Communication at Whataburger wrote in an email to TIME. “So, we really can’t say for sure, but this may be the first time we captured someone from the cheering crew wiping sweat off the hero’s brow. Ethan flexed all his Whataburger muscles on this one.” 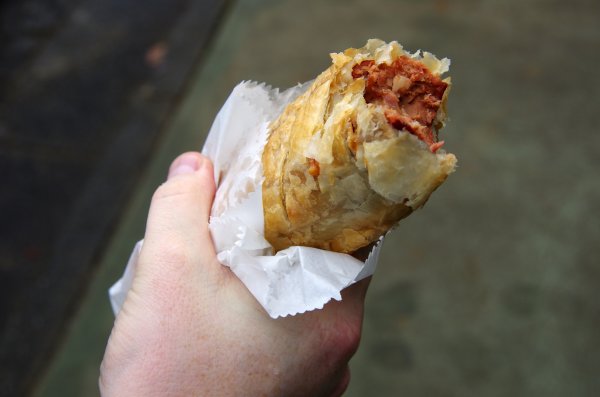 Vegan Is Not Happy She Got the Real Sausage Roll Instead of the Plant-Based Version
Next Up: Editor's Pick