Joey Chestnut (C) and Matt Stonie (R) compete in the 2017 Nathan's Famous International Hot Dog Eating Contest at Coney Island on July 4, 2017 in the Brooklyn borough of New York City. Chestnut was declared the winner for this 10th title overall after eating 72 hot dogs in 10 minutes. The contest in Coney Island is in it's 101th year.
Alex Wroblewski—Getty Images
By Currie Engel

Every year, tens of thousands gather at Coney Island to watch a mass consumption of cased-meat at Nathan’s Famous Hot Dog Eating Contest. Another 1 to 1.5 million more tune in at home, according to organizers.

For many of the spectators, watching the contest has become a fun—if ludicrous—Fourth of July ritual. But what’s so compelling about it?

The nationally televised event, which traces its origins back to the 1970s, has found a loyal following throughout the country. Among the estimated 35,000 people in attendance this year were school principals, neuroscience lab workers, postal carriers and college sweethearts. People came from as far as Alaska and Ohio just to watch the 10-minute contest. (And in case you missed it, this year, reigning champ Joey Chestnut won after woofing down 71 hotdogs in 10 minutes).

Christine Miller, a supervisor who works for the state of Pennsylvania has been watching the contest with her children since they were little. With no babysitter to watch her kids, watching the televised contest was a fun, easy thing to do together. And it felt very patriotic. It’s now a family tradition. “This is America at its best. This is what it’s all about,” Miller explains. This year, she waited in line with her son, now 26, to watch the competitors in person.

For Marian Gonzales and Wayne Seibel, a couple from Alaska on vacation in New York, this was an event they wanted to enjoy together. Gonzales stopped by the contest last year while on a trip to the city, but she wanted to come back with Seibel. When they’re home, they usually watch on TV. Gonzales thinks part of the draw is that the contest feels like a competitive sporting event, but more relatable.

“To me they seem like more average people or regular people that can do it,” Gonzales says of the contestants.

Others were just there because they said it feels like the best way to celebrate all things American. “We watch it every year on ESPN,” says Brendan Schaaf, a 20-year-old from Pennsylvania who went with friends. “It embodies America—freedom, hot dogs, sunshine, barbecue. It’s all the best things.”

But it’s not just the nature of a competition alone. It’s the very objective of an eating contest that makes it stand out to audiences, says one expert.

In his book Horsemen of the Esophagus, author and journalist Jason Fagone spent a year following the lives of competitive eaters and their participation in eating contests. He has his own theories about the event’s popularity. “An eating contest is basically the food equivalent of a car crash. It’s just hard for any human to look away,” Fagone writes to TIME. “And the Nathan’s event is the biggest crash on the biggest road, on live TV.”

Fagone thinks the hot dog eating contest’s appeal might stem from the universal food anxieties people experience—what we eat and how that affects our bodies—and the competitors’ blatant disregard for this. “They’re sort of up on stage just openly defying everything that we’re afraid of,” Fagone explains. “And there’s something kind of compelling about that.”

The awe spectators feel does seem to be a driving factor in their decision to watch. “I just ate two Nathan’s yesterday and that was all I could eat,” Seibel says. “I was done. How do you put 70 of ’em in you is beyond me.”

Hampton Sides, a journalist and author, has studied these types of unique American gatherings in depth. He is the author of Americana, delves into the mysteries of American subcultures. Sides’ book explores what critics have called a “national passion for joining.” While Sides didn’t study Nathan’s Famous Hot Dog Eating Contest in his book, he offered insight into these kinds of events’ spectacular— and somewhat mind-boggling— attendance.

“America’s such a relatively young country that has had to kind of concoct our own traditions,” he says. Sides wonders if Americans hold on to absurd rituals and traditions, like the hot dog eating contest, with “an exaggerated sense of loyalty” because of a lack of the kinds of rich, deep traditions other countries and cultures have. America turned 243 this Fourth of July, a baby compared to the likes of Egypt, India, and China.

This Independence Day tradition has only relatively recently developed a strong national following. The contest can thank the rivalries and advanced eating techniques of Takeru Kobayashi and Joey Chestnut, and the event’s master of ceremonies, George Shea, for its widespread notoriety. When Shea and his brother took over publicity for the event in 1991, they worked hard to turn the event into a competitive spectacle. And then Kobayashi obliterated the standing record of 25.5 hot dogs in 2001 by eating 50 in the allotted time (which was originally 12 minutes but was shaved down to 10 in 2008), and the competition got much more exciting. Chestnut provided the perfect rivalry for Kobayashi in 2007, taking him down after eating 66 hot dogs in 12 minutes. Now, there were sides to choose, people to cheer for, bets to settle.

Shea, who also serves as the event’s smooth-talking emcee, calls Joey Chestnut an American hero. He thinks people watch every year because Chestnut embodies this “American-ness” people crave on Independence Day. “He doesn’t represent necessarily Nathan’s, Brooklyn, California, whatever. He represents freedom and America on the Fourth of July. And that’s a very powerful position,” he tells TIME.

Major League Eating, the professional competitive eating league Shea helped found, sponsors other eating competitions throughout the year, but none come close to the notoriety of Nathan’s Famous Hot Dog Eating Contest. For many Americans, star competitive eaters like Chestnut and Kobayashi have become household names. ESPN’s live airing of the contest goes back sixteen years, and the network has a contract to continue its broadcast through at least 2024.

But regardless of whether it’s watched on television or in person, the contest has managed to establish its place on the holiday calendar for so many Americans.

“We’re such a melting pot of so many different ethnic and religious and every other kind of group you can think of,” Sides, the subculture specialist, says, trying to explain the popularity of curious followings. “We’re forever trying to figure out, well, we know what divides us, but what unites us?”

Apparently, for better or worse, hot dogs do. 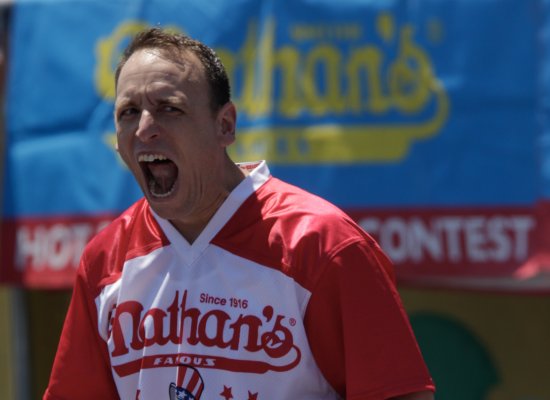