'It’s About Our Boy.' Parents of U.K. Teen Allegedly Killed by Diplomat’s Wife Not Worried About Political Fight After Trump Meeting

Charlotte Charles and Tim Dunn, the parents of Harry Dunn, a 19-year-old who was killed when a car crashed into his motorbike on August 27.
Sara Naomi Lewkowicz for TIME
By Jasmine Aguilera

Charlotte Charles and Tim Dunn say they made a deathbed promise to seek justice for their son — and they have every intention to keep it.

Just two days after the pair took part in a bizarre White House meeting in which President Donald Trump attempted to ambush them with a surprise meeting with the woman believed to have struck and killed their 19-year-old son, Harry Dunn, the grieving parents tell TIME they cannot understand what the American government expects them to do, and they will not simply accept that their son’s suspected killer may be exempt from prosecution because she is the wife of a diplomat.

Anne Sacoolas, the wife of an American diplomat, is suspected to have struck Harry Dunn on his motorcycle in August, and then fled to the U.S. after claiming diplomatic immunity, igniting pressure on the U.S. to waive that immunity and allow the U.K. to press charges against her.

The parents came to the U.S. in an effort to persuade the U.S. government officials to reconsider Sacoolas’ immunity — a law that protects diplomats and their family members from prosecution in the country that they are based — and were shocked when a vague invitation to the White House led to a meeting with the President himself. They were even more stunned when Trump tried to cajole them into meeting Sacoolas, whom they were told was also inside the building. Although they previously called Trump “gracious” during the meeting, they said he seemed surprised when they declined to agree to the unexpected meeting with Sacoolas.

“It became quite evident then that he was hoping we were just going to just say ‘Oh great, okay,'” Charles tells TIME. Trump didn’t know that the family had already decided against ever meeting Sacoolas unless it was on U.K. soil and with grief counselors who could help their healing process.

On August 27, Harry Dunn was riding his bike near an Air Force base run by the U.S. government when Sacoolas was allegedly driving on the wrong side of the road and struck him head on. Tim Dunn was able to arrive on the scene about 40 minutes later. He found his son with broken bones and finding it hard to breath. When first responders sedated Harry, Tim Dunn says he had no idea he would never be able to talk to his son again: “I knew he had broken bones, but at no time did I think he was going to die.”

The parents initially thought justice would be easy and swift, considering the evidence against Sacoolas that police have gathered, and her original willingness to cooperate with the investigation — and are now coping with a different reality as they also work through their grief.

“Of course we thought that was going to be so straightforward,” Charles says, fighting back tears. “But we promised him. He was a man of his word, and he looked out for everybody and he was a very honest boy. And that’s why we find ourselves in this situation, because we wouldn’t be honoring him if we didn’t go through with this.”

The family is wrapping up their visit to the U.S. and returning home on Friday morning. After they are back in the U.K. they say they have no plans to stop their battle. “You can’t just expect us to walk away,” Dunn says. “I can’t understand what the American government is expecting us, as a family, to do.”

“It’s about Harry, it’s not about politics,” Charles adds. “It shouldn’t be about the governments and it shouldn’t be us worrying about this becoming a political brawl or whatever. It’s about our boy, and making sure that it doesn’t happen to another family.”

Who was Harry Dunn?

Harry Dunn was 19 and just embracing self-acceptance at the time of his death, his parents say. He had made it past his difficult teenage years and had grown up to love motorcycles and reggae, hip hop and dance music. “This last year I had never known him so happy,” Tim Dunn says. “Everything seemed to be just dropping into place for him.”

Charles and Tim Dunn divorced when Harry and his twin brother, Niall, were about a year old. Each has since remarried and their families have stayed close, living only five miles apart, in order to raise Harry and Niall together.

Harry wanted to spend the rest of his life traveling the world on his motorcycle, Charles says, adding that he had logged more than 50,000 miles on his bike in three-and-a-half years. He had been in an accident once before, but the driver involved in that incident admitted they were at fault, Charles says.

Since Harry’s death, the family has coped by sharing memories — and laughing at some of the funny things he did. They say his brother has not been able to work since the accident.

“We need time to grieve,” Charles says. “And we’re locking that all away to do what we’re doing.”

Since Sacoolas left the U.K., calls for her return have come from high-ranking U.K. officials, including Prime Minister Boris Johnson. At a Tuesday press conference, Trump told reporters that Johnson had asked him to set up the meeting, but Harry’s parents say they don’t think Johnson would have ever agreed to let Trump try and ambush the family in the way that he did.

“I can’t imagine for one second that [Johnson] would have approved, or that that was how to start the healing process,” Charles tells TIME.

The family says their rejection to meet Sacoolas was met with aggression by national security adviser Robert O’Brien, whom they said told them Sacoolas would “never” return to the U.K.

A spokesperson for Johnson’s office told The Guardian that the Prime Minister did not know of Trump’s plan to introduce the family to Sacoolas. The PM’s office has repeatedly urged the Trump Administration to allow British police to continue their investigation on Sacoolas. “I share the frustration of Harry’s mother and father. They have lost their son and the justice process is not being allowed to properly run its course,” said U.K. Foreign Secretary Dominic Raab in an Oct. 9 public statement. “We will use every avenue and opportunity open to us to try to right the wrong and allow the justice system to follow its natural course.”

Harry’s family says they aren’t holding out any hope that the U.S. will waive Sacoolas’ claim to diplomatic immunity. For now, the family is counting on their own U.K. government to step up pressure.

“None of this should be happening, we shouldn’t have to do this,” Charles says. “But we will continue. We’ll push it as far as we can possibly push it.” 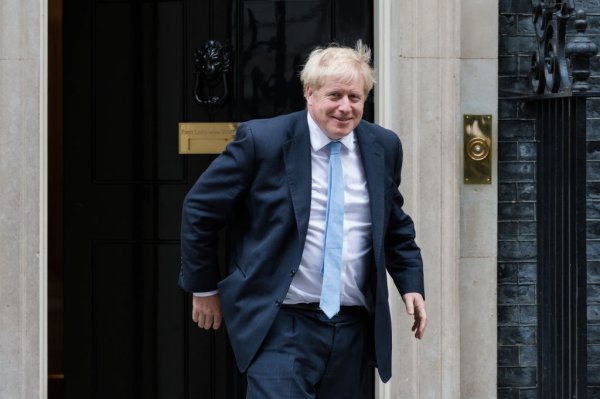 U.K. and E.U. Come to a New Deal on Brexit
Next Up: Editor's Pick