Diplomat's Wife Suspected in Fatal U.K. Car Crash Returned to the U.S. After Telling Authorities She Would Stay. Here's What to Know

U.K. officials are asking that diplomatic immunity be waived after the wife of a U.S. diplomat fled England following an August car crash that killed a 19-year-old on his motorcycle.

Northamptonshire Police Superintendent Sarah Johnson confirmed in a statement released on Saturday that a 42-year-old American woman — who is a suspect in a car crash that killed Harry Dunn on Aug. 27 — left the county, even after telling authorities she had no plans to do so.

“Northamptonshire Police followed all of its usual procedures following the incident, including liaising closely with the suspect, who engaged fully with us at the time and had previously confirmed to us that she had no plans to leave the country in the near future,” Johnson said in the statement. “Due process was also followed in seeking the necessary documentation to allow for the arrest and formal interview of the suspect, and the force is now exploring all opportunities through diplomatic channels to ensure that the investigation continues to progress.”

The suspect, who Northamptonshire Police have identified as the wife of a U.S. diplomat, has not been named by the U.S. Embassy, citing privacy and security concerns.

“Harry Dunn’s family deserves justice and in order to achieve this, a full and thorough investigation, with the assistance of all parties involved, needs to take place,” Johnson added.

What happened in the crash

Police said in an August statement that Dunn’s motorbike was hit head-on by a Volvo after exiting the Royal Air Force Croughton air station in Northamptonshire, England, around 8:30 p.m. on Aug. 27. The suspect was driving on the wrong side of the road, Northamptonshire police said.

The debate over diplomatic immunity

Nick Adderley, Chief Constable for Northamptonshire Police, tweeted Sunday that as the wife of a U.S. diplomat, the suspect is entitled to diplomatic immunity. Adderley added he and Steven Mold, Northamptonshire Police Fire and Crime Commissioner have written “in the strongest terms” to the U.S. Embassy to urge them to waive immunity “in order to allow the justice process to take place.”

But U.K. officials may be facing an uphill battle. A State Department official told TIME in a statement that diplomatic immunity is “rarely waived.”

“We express our deepest sympathies and offer condolences to the family of the deceased in this tragic traffic accident,” the department said in a statement. “Any questions regarding a waiver of the immunity with regard to our diplomats and their family members overseas in a case like this receive intense attention at senior levels and are considered carefully given the global impact such decisions carry; immunity is rarely waived. The U.S. Embassy has been and will continue to be in close contact with British officials.”

According to the 1961 Vienna Convention on Diplomatic Relations, foreign diplomats and their family members are given certain protections that allow them to avoid arrest for almost any crime unless the diplomat’s home country decides to waive immunity.

“For the most part diplomats, especially the highest-ranking officials, have complete immunity over what they do and usually it extends to families, ” he tells TIME. “That’s embedded into international law because really, its the cornerstone of diplomacy. It’s one of those reciprocal actions that states grant each other in order to allow diplomacy to take place.”

Zierler says he does not believe the U.S. will waive immunity for the suspect in Dunn’s death.

“We tend to have a broad expansive nature of diplomatic immunity because the U.S. would rather have a system that works smoothly, even in a case where an individual may have gotten caught violating the law,” he says. “The larger purpose of keeping diplomacy open and trusting when we send diplomats and their families elsewhere is that they will be free from detention from another country. And the reciprocal, we do the same for diplomats in the United States.”

Even British Prime Minister Boris Johnson, often considered an ally of President Donald Trump, has weighed in. In an interview with the BBC on Monday Johnson said that he does not believe diplomatic immunity is being properly applied in this situation. Johnson said he hopes that the wife of the diplomat will return to the U.K. and “engage properly with the processes of law as they are carried out in this country.”

Johnson added he has raised the issue with the American ambassador in the U.K. and if the issue is not resolved he will personally raise it with the White House.

What Harry Dunn’s family has said

Dunn is described as motorbike enthusiast who “lived his short life to the fullest” in a GoFundMe page called “Justice 4 Harry” that was started by a family friend.

“Harry was bubbly and outgoing and from the age of 7, he shared a passion for riding motorbikes with his Gramps and step-dad,” the fundraiser said. “That passion eventually grew to become his main interest in life and Harry lived for riding spending all his wages on fuel for his bike. He loved to get out on the road and explore the countryside…the family take enormous comfort from the fact that his riding at the time of the collision was not to blame for the accident.”

Dunn’s mother Charlotte Charles told Sky News that she is “utterly broken,” following the accident and that she and her family want justice. “We don’t know how we can start to grieve for him,” she said in the Sky News interview. “We have nothing. No justice. We have nothing to put our minds at rest that she’s even remorseful.”

Harry’s father, Tim Dunn, told Sky News he can’t understand how the suspect is “living with herself” after fleeing.

“We’re disgusted, appalled, how she could be having this cloak wrapped around her,” he said. “I’m angry that someone could do this and then get on a plane and go.” 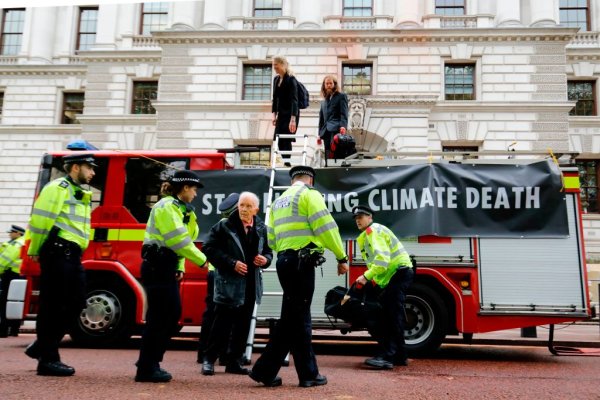