United States flags were at half-staff on Thursday in honor of Maryland Rep. Elijah Cummings, a lion of the House of Representatives and chair of its Oversight Committee, who died early that morning at age 68 due to complications from “longstanding health challenges,” according to his office.

Widely respected on both sides of the aisle in Congress, Cummings served Maryland’s 7th District for 23 years, representing some 700,000 constituents. He was known as a relentless fighter for equal justice and a champion of civil rights.

Of late he was best known as one of the Democratic leaders of the impeachment inquiry into President Donald Trump’s request that his Ukrainian counterpart investigate his political rival, former Vice President Joe Biden. Cummings leaves behind his wife and three children.

“His commitment to the underdog, to the person who sometimes gets overlooked and the need to protect their rights and their interests and … address their challenges was something that was a passion of his because he never forgot where he came from or who he represented,” Virginia Rep. Gerry Connolly, a member of the Oversight Committee who at times served as the point man on the committee during Cummings’ absence, told TIME.

The son of sharecroppers, Cummings rose through the ranks of Congress to become chairman of the powerful House Oversight Committee, one of three that are currently overseeing the impeachment inquiry into Trump. Despite his absence from the Capitol since the inquiry began, Cummings’ name has been on virtually every subpoena and request that has been jointly issued.

Since he took the gavel, his committee has been probing everything from possible violations of the emoluments clause in the Constitution and the President’s finances to the White House security clearance process.

“I want to make clear: I am not here to create headlines,” he told TIME in an interview last December, shortly before he officially became chairman. “I am here to get people’s problems solved.”

It was a sentiment he was fond of employing. But Cummings’ understated work yielded some significant victories, not only for his committee, but for the legislative branch as a whole.

In addition to recent victories regarding the President — including a federal appeals court affirming last week that Trump’s accounting firm must comply with the Oversight Committee’s subpoena for a decade’s worth of Trump’s finances, as well as overseeing the March testimony of Tricia Newbold, a whistleblower from the White House Personnel Security Office — Cummings was also a fierce advocate in the congressional fight to lower drug prices. Along with Rep. Peter Welch, Cummings launched a probe into the “dramatically increasing” prices of some Multiple Sclerosis medications, which surged as much as 1002% over three decades. It was also Cummings who famously lambasted “Pharma bro” Martin Shkreli — now a convicted felon — for smirking during a congressional hearing on drug prices. “It’s not funny, Mr. Shkreli. People are dying,” Cummings said back in 2016.

On the day of his death, Cummings’ work on the bipartisan effort to make medications more cost-accessible was rewarded when Democrats indicated they would name their signature drug pricing bill, intended to negotiate the prices of up to 250 brand-name drugs in Medicare, after the late Congressman.

“It’s an extraordinary moment where three committees are going to be acting on, in effect, his bill, and it represents a culmination of a lifetime public commitment to try to get affordable drug costs,” Welch told TIME on Thursday.

Welch also recalled a meeting he and Cummings had with Trump at the White House early in the President’s tenure on drug price negotiation, when the subject of Cummings’s Baltimore neighborhood also came up. That was long before the President made racist comments about it on Twitter, including one that called it a “disgusting, rat and rodent infested mess.”

Trump, Welch said, couldn’t imagine someone wanting to live there. “It was the contrast between the President who just couldn’t imagine life there and Elijah who couldn’t imagine living in a better place with better people,” Welch said, adding that Cummings also used the opportunity to bring up voter suppression, another issue he worked on tirelessly. The White House declined to comment on the conversation on the record.

Cummings’ effectiveness in Congress clearly drew the ire of Trump. In addition to insulting Baltimore, Trump also said Cummings was “racist” less than three months ago, and should have focused his energy on cleaning up the district rather than on investigations.

On the day of his death, however, Trump sounded a more respectful tone. “I got to see first hand the strength, passion and wisdom of this highly respected political leader. His work and voice on so many fronts will be very hard, if not impossible, to replace!” the President tweeted.

A longtime civil rights activist, Cummings gained national attention for his conciliatory role in the 2015 Baltimore riots, using a bullhorn to urge his constituents to adhere to curfew. In recent years, he’d been forced to slow down after undergoing multiple surgeries on his heart and his knee. Multiple lawmakers described Cummings as someone who commanded attention from a room, with audiences eager to hear his input. Cummings, lawmakers said, enjoyed telling friends about his parents and his upbringing in Baltimore.

“He was our barometer in the Congressional Black Caucus. He was our moral compass, so to say. And he was the one that we knew would tell it to us straight and that he would share his life experiences with us,” said Missouri Rep. Lacy Clay, who is also a member of the Oversight Committee.

Speaker of the House Nancy Pelosi said she was “personally devastated” by Cummings’ death. “In the House, Elijah was our North Star. He was a leader of towering character and integrity, whose stirring voice and steadfast values pushed the Congress and country to rise always to a higher purpose,” she said in a statement.

In a rare statement, former President and First Lady Barack and Michelle Obama said they were “heartbroken” over their friend’s death, while praising Cummings as a leader who “remained steadfast in his pursuit of truth, justice and reconciliation.”

Congressional Republicans also honored their colleague who sat across the aisle.

“There was no stronger advocate in Washington DC and no better friend in Congress than Elijah Cummings,” Rep. Mark Meadows said in a press release sent out by the conservative House Freedom Caucus, of which Meadows is a former chair. Meadows and Cummings were close friends.

The House honored him on Thursday afternoon with the Maryland delegation and Pelosi taking the lead as a somber body of members looked on, some quietly wiping away tears. A bouquet of flowers was also left on Cummings’ vacant seat.

“He was just somebody who was universally respected. He never played games with anybody, he never was on the make like so many members are,” said Kentucky Rep. John Yarmuth.

Rep. Carolyn Maloney, the second-highest Democrat on the Oversight Committee by seniority, will take over Cummings’ role as acting Chair, a leadership aide confirmed to TIME. A vote to elect a new permanent chair will be held later.

Throughout his tenure, Cummings urged his colleagues to remember that the work they did in the halls of the Capitol building would outlive them. “I tell my staff that 200 years from now people will be reading about this moment,” he told reporters in February as he stood supported by a walker outside of the hearing room where the Oversight Committee had just interviewed Michael Cohen, Trump’s longtime personal attorney.

He cared so deeply about his causes, his constituents, and his country that he spent some of his final hours on Earth signing subpoenas to investigate a temporary policy change that could have lead to the deportation of sick immigrants.

Nobody that knew him would be surprised.

Write to Alana Abramson at Alana.Abramson@time.com, Abby Vesoulis at abby.vesoulis@time.com and Lissandra Villa at lissandra.villa@time.com. 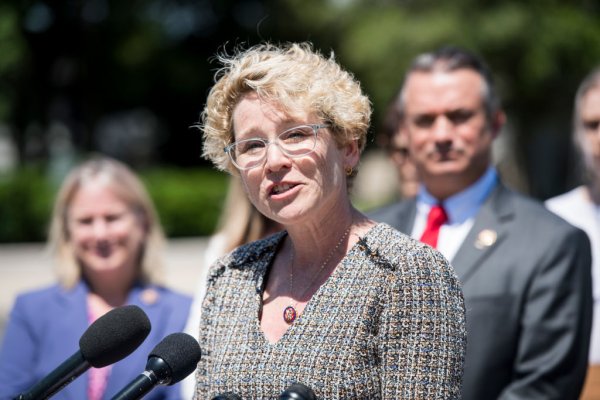 This Freshman Congresswoman Wants to Restore U.S. Funding to U.N. Reproductive-Health Agency
Next Up: Editor's Pick