President Donald Trumps’s attacks on Rep. Elijah Cummings ignited yet another week of controversy, amplifying the debate over race in the United States and the conditions of inner cities. But the attacks have also highlighted Cummings’ effectiveness as chairman of the House committee with the broadest scope to investigate the Trump Administration — even in the wake of persistent roadblocks from the very Administration he is trying to investigate.

As chairman of the House Oversight Committee, Cummings has the widest jurisdiction when it comes to probing the President and his Administration. And even with the Trump Administration’s repeated defiance of subpoenas and document requests, he’s managed to achieve some results. Most significantly, some of his victories involve two the President’s red lines — his finances and his children. And in an era of partisanship, he’s also managed to conduct himself while retaining some semblance of respect across the aisle.

“We know that Trump doesn’t like oversight. Elijah Cummings is not taking no for an answer,” said Molly Claflin, Chief Oversight Counsel at American Oversight, a non-partisan and anti-corruption watchdog group. “Now that [former Special Counsel] Mueller has concluded his report Representative Cummings is probably the single most dangerous person to Trump … I think Trump recognizes that.”

In an interview with TIME last December, right before he officially became Chairman, Cummings emphasized that he wanted to stay out of the spotlight. “I am not here to make headlines,” he said at the time. And, for the most part, he’s fulfilled that objective. As headlines about Mueller’s report and subsequent testimony dominated news coverage, it was Cummings’ counterparts, Reps. Jerrold Nadler and Adam Schiff — the chairmen of the House Judiciary and Intelligence Committees, respectively — who took center stage. But Cummings has been quietly plugging along.

In May, a federal judge ruled that Cummings was allowed to subpoena Trump’s longtime accounting firm, Mazars USA, for roughly a decade of the President and Trump organization’s financial records. (The Administration is appealing the case). And through the use of whistleblowers and interviews, Cummings has revealed damning information about the President’s son-in-law Jared Kushner. In April, the committee released portions of an interview with Tricia Newbold, an employee in the White House Personnel Security Office who said she had denied security clearances for over 20 Trump Administration staffers only to have those decisions overturned by her then-boss Carl Kline. The Washington Post later reported one of those senior officials was Kushner. (White House officials declined to comment to the Post).

Cummings’ most recent move, which he announced last week, was his committee’s approval of subpoenas for emails and texts that high level White House officials had sent on their personal accounts discussing official business. It is clear based on past evidence that the subpoenas could apply to Kushner and the President’s daughter Ivanka. Cummings has previously said the couple’s attorney told him during an interview in late 2018 that Kushner had used an encrypted messenger app for official White House business, and that Ivanka Trump was still forwarding White House emails to her personal account. (The attorney, Abbe Lowell, subsequently denied the account).

“Even the most Republican of Republicans will tell you they respect Elijah Cummings,” said Kurt Bardella, a former Republican spokesperson for the House Oversight Committee, who has since disavowed ties with the party. “I honestly think [Trump] has no idea how to blunt the effect of Cummings’ oversight.”

Of the nearly dozen tweets the President has directed at Cummings since July 27, just two have honed in on the investigations his committee is conducting. “Elijah Cummings spends all of his time trying to hurt innocent people through “Oversight,”’ Trump tweeted Saturday evening. “He does NOTHING for his very poor, very dangerous and very badly run district!” He subsequently opined that Cummings “just wants to use his Oversight Committee to hurt innocent people and divide our Country.”

But both Republicans and Democrats are of the mindset Cummings’ investigative work as Chairman is a motivating factor in these attacks. “I know Trump is livid over the House Oversight Committee,” said Republican donor Dan Eberhart,” “but there’s no upside for him here.”

Tom Davis, a former Republican lawmaker who previously chaired the Oversight committee, said the attacks are “of course” stemming from Cummings’ work. “If he wasn’t chairman of that committee there would be no interest in him at all,” he said. “But he’s there, and he’s causing him problems.”

Davis noted that attacks on investigative lawmakers have been emanating from the White House for decades, but have always been more implicit, usually coming in the form of media leaks. The difference this time, he said, is Twitter — and the fact that the onslaught is coming directly from the President himself. 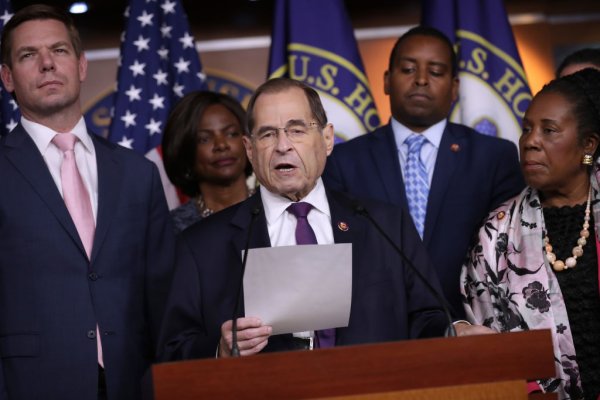