The Second Democratic Debates Could Be All About Trump's Racist Tweets

People stand outside the Fox Theatre ahead of the democratic debates in Detroit, Michigan on July 29, 2019.
JIM WATSON—AFP/Getty Images
By Lissandra Villa/Detroit and Charlotte Alter/Detroit

In a normal world, the Democratic presidential candidates would spend their second round of debates this week talking about the big news. A mass shooting in California. An alarming spike in temperatures across Europe. The prospect of the Federal Reserve cutting interest rates for the first time since the financial crisis.

But this isn’t a normal world; this is Donald Trump’s world. And in this world, the President of the United States spent his weekend writing racist tweets about Democratic Rep. Elijah Cummings — who as chairman of the House Oversight Committee has been investigating Trump — and his majority-black Baltimore district, just weeks after he unleashed a series of racist tweets attacking female lawmakers of color.

As much as Democrats may have wanted to talk up their plans for healthcare or education or climate change in the second round of Democratic debates Tuesday and Wednesday in Detroit, Trump’s tweets have reset the narrative. Which leaves the candidates with a difficult choice: Should they spend their precious moments of airtime condemning Trump’s racism, or outlining their policies to try to address racial inequality? Should they make a moral case against Trump, or a case for themselves?

“Every time he has a temper tantrum like this, he gets all of the attention, he sucks all the air out, and then we don’t have time to talk about the real problems,” says Nina Turner, a national co-chair on Senator Bernie Sanders’ campaign. “I’m sure that all of the Democratic candidates…would like to talk about more issues than just the fact that we have a pure unadulterated bigot, [a] racist in the White House.”

Most major Democratic candidates have sought to avoid making Trump the focus of their campaigns thus far. There’s a good reason for that. In 2016, Democratic nominee Hillary Clinton spent a lot of time arguing that Trump’s racism was disqualifying, and famously called some of his supporters “deplorables.” Clinton lost, and the lesson many Democrats took away from that race was to run on how the party would help voters, not on why Trump is unfit for office. In 2018, Democrats won the House of Representatives largely by focusing on health care and other kitchen-table issues.

The 2020 contenders have tried to follow the same blueprint. But this is a desperation point for many of them. This week’s debates will be the last before the polling and fundraising thresholds to qualify for future debates get steeper, making this a do-or-die moment for candidates on the cusp. The time to find a winning strategy is running out, and going after Trump could drive fundraising and buzz.

Still, many Democrats warn that arguing with Trump about race is playing on the incumbent’s turf. The core of his campaign strategy, from his rallies to his ad buys, is oriented around provoking outrage. Even Trump’s digital strategy is rooted on outrage clicks: the campaign uses algorithms to place digital ad buys whenever Trump causes an online scandal, then the ads urge supporters to text the campaign or buy bumper stickers, which then helps them harvest more voter contact data.

“I want them to talk about racism every day,” Trump’s former strategist Steve Bannon once said. “If the left is focused on race and identity, and we go with economic nationalism, we can crush the Democrats.”

Which may explain why Trump seems increasingly intent on swirling up anger in his base. The attack on Cummings comes after a series of broadsides against Democratic freshman lawmakers of color. Just weeks ago, he also targeted freshmen Representatives Ilhan Omar, Alexandria Ocasio-Cortez, Ayanna Pressley, and Rashida Tlaib, prompting his supporters to chant “send her back” when he mentioned Omar at a rally. (Omar is an American citizen.)

The Democrats gathered in Detroit will be debating against this backdrop. And given the way the contest has unfolded, there seems little question that they’ll be focused on Trump’s tweets. Many of the candidates have made racial justice a significant policy priority in their own campaigns. Warren has plans to reduce black maternal mortality, close the racial wealth gap and give $50 billion to historically black colleges and universities. Harris has a $100 billion plan to help black homeowners buy houses in historically red-lined communities. Sanders has plans to address voting rights, criminal justice and income inequality in black communities. South Bend, Ind., Mayor Pete Buttigieg announced the Douglass Plan, which addresses everything from housing to health care in an attempt to reduce the systematic disparities facing black Americans.

Even as they condemn Trump’s tweets, Democrats are working hard to walk the walk in addressing racial inequality in their own party. A top staffer at the Democratic Congressional Campaign Committee, which serves as House Democrats’ campaign branch, resigned Monday over backlash that she had not hired more diverse staffers. Candidates have also been forced to recognize their inherent white privilege. Former Representative Beto O’Rourke recently wrote about his discovery that he and his wife descended from slave owners, and how those advantages trickled down to him through the generations.

Tensions between the candidates over racial issues are increasingly defining the primary. Biden, the contest’s front-runner, has been on the receiving end of attacks from Harris and New Jersey Senator Cory Booker for his record on race. During the first set of debates in June, Harris and Biden clashed over his former opposition to federally mandated school busing, and Booker has repeatedly called Biden out for his language around race. (Biden has retained strong support among black voters.) The three of them will share the stage on the second night of debates, and Biden’s team has already put out preemptive attacks on Harris and Booker.

Any Democratic nominee will have to figure out a way to condemn Trump’s racist attitudes without letting him dominate the narrative. This week’s debate will be their first big test.

Write to Lissandra Villa at lissandra.villa@time.com and Charlotte Alter at charlotte.alter@time.com. 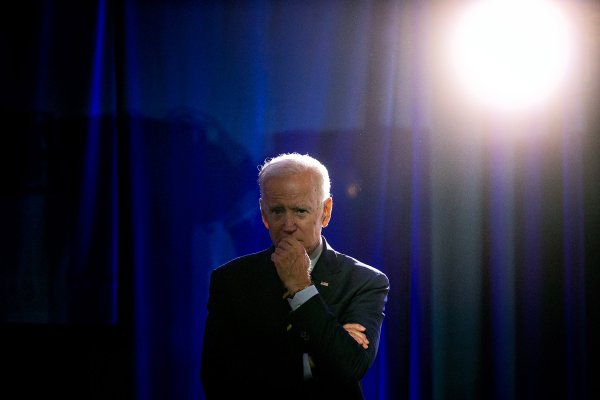 Why Joe Biden's Campaign is Struggling
Next Up: Editor's Pick