Using his most forceful language to date, former Vice President Joe Biden on Wednesday for the first time backed the impeachment of President Donald Trump.

It was a sharp change for Biden, who just last week argued that it was up to Congress to figure out how to deal with allegations that Trump had asked foreign governments to launch investigations into Biden and his son, Hunter, over unproven corruption charges. Biden had argued that he had to keep his focus on defeating Trump at the ballot box as the Democratic nominee next year.

But polling indicates a swift shift in the public’s mind on the question of impeachment. Majorities now back Congress moving forward now that Trump has said in public that he had sought investigations in Ukraine and China against Biden, a frontrunner for the Democratic nomination to take on Trump next year. Support for impeachment has risen eight points among Republicans since May and 11 points among independents, according to CNN’s polling.

“Donald Trump has violated his oath of office, betrayed this nation and committed impeachable acts. You know, to preserve our Constitution, our democracy, our basic integrity, he should be impeached,” Biden said at a campaign stop in Rochester, N.H.

As Biden was speaking, the President reacted on Twitter: “So pathetic to see Sleepy Joe Biden, who with his son, Hunter, and to the detriment of the American Taxpayer, has ripped off at least two countries for millions of dollars, calling for my impeachment – and I did nothing wrong. Joe’s Failing Campaign gave him no other choice!”

The dual-track breaking developments suggested the President had set aside at least part of his 1 o’clock hour to watch one of the Democratic frontrunners, who in poll after poll is seen as a strong challenger to the President’s re-election. Trump not only faces a re-election challenge but a potential constitutional one from Congress.

“We cannot let him get away with it,” Biden said to loud applause during one of his stronger appearances of the year. “We all laughed when he said he could shoot someone on Fifth Avenue and get away with it. It’s not a joke. He is shooting holes in our Constitution, and we cannot allow him to get away with it.”

Biden’s updated stance puts him in the mainstream of the Democrats seeking their party’s nomination, and in line with the voters who have a solid raft of other options. A full 81% of self-described liberals in the latest Washington Post poll said they thought Trump’s asks were inappropriate and 68% of self-described moderates said the same. Perhaps most threatening to Trump? The 37% of self-described conservatives who thought Trump was inappropriate to have asked for foreign help. Even the fewest defections from the Trump alliance of 2016 is a danger for the re-election campaign, and Biden has made clear he plans to compete for any voter who will hear him out.

But it’s clear that Trump’s disclosure that he had sought foreign help to ding his domestic political rival shifted the primary’s discussion, from an exercise in resistance to one of political necessity inside a contest that may be the most progressive in a generation. The Post poll released this week shows 57% of independents and a remarkable 28% of Republicans think Congress should have begun an impeachment inquiry into Trump. Being for impeachment no longer was considered fringe.

(The same dynamic is at play among Republicans, especially those facing voters this year, but in reverse. Sen. Martha McSally, appointed to fill the balance of the late John McCain’s seat after losing a bid last year for a full six-year term, has been “evolving,” in the words of an Arizona Republic headline. The celebrated fighter pilot called impeachment a “kamikaze mission” in September but in recent days has repeatedly refused to answer local reporters’ questions about her position, merely saying the process is serious. She faces a potentially rough bid next year in a border state where Trump is simultaneously beloved and reviled.)

Until Wednesday, Biden was a lonely holdout from the impeachment bandwagon. Aides said that the longtime senator didn’t have an interest in weighing in on what, realistically, he couldn’t force. A 36-year veteran of the Senate, he didn’t much appreciate it when outsiders did it.

For Biden, according to an adviser, the asks of Ukraine and of China smack of bullying. A former bullied student because of a childhood stutter, Biden has long been outspoken in his hatred of bullies. He’s called Trump a bully before, of course, but these new developments now resonated with Biden. Trump, as the embodiment of the United States, was looking to bully other nations for his personal political advantage. Biden, the adviser said, felt shame.

“I’m not going to let him get away with it,” Biden said. “He’s picked a fight with the wrong guy.”

The challenge, of course, is how Biden leverages his new stance in a primary where the major players now agree. It’s tough to see how a shared view makes for compelling questions when 12 of the contenders are set to face-off on Tuesday in the suburbs of Columbus, Ohio, for the next debate. 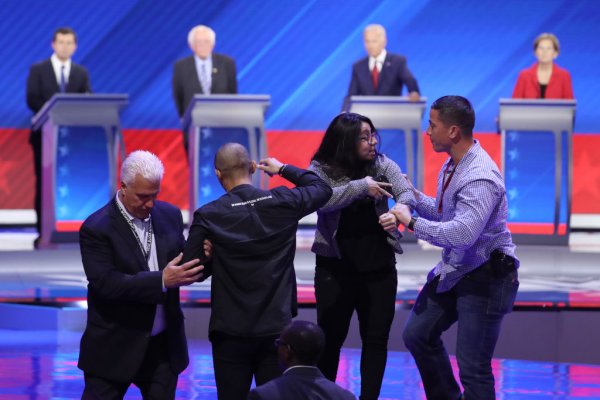 Here's What Protesters Were Shouting at Joe Biden During the Third Democratic Debate
Next Up: Editor's Pick